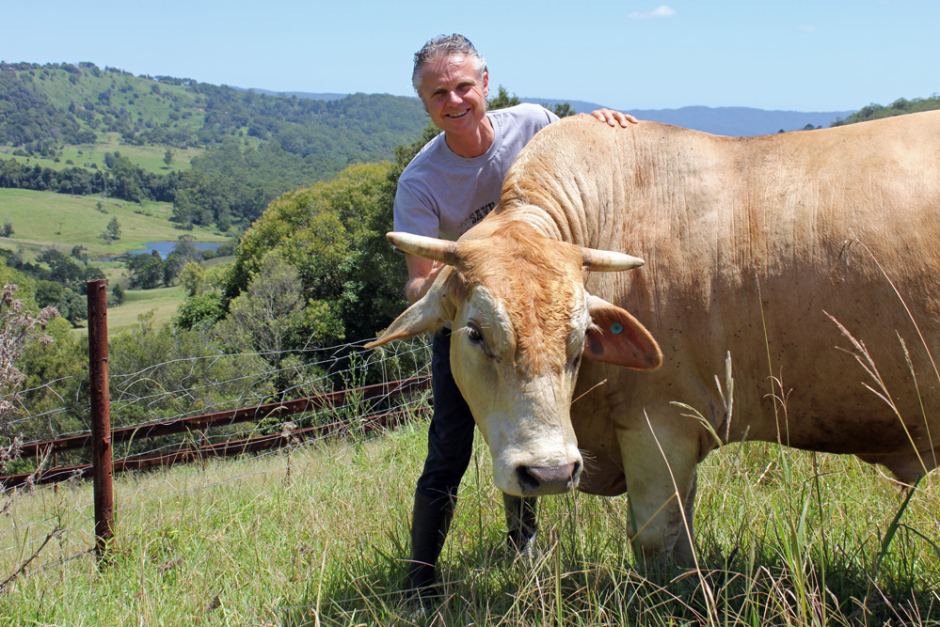 A Sunshine Coast animal legal rights lawyer, vegan, and amateur boxer, has established a sanctuary to save cows from the slaughterhouse.

Anthony Walsgott is the founder of the group 'Save a Cow' which buys cows, calves, steers and bulls at market price in a bid to keep them from the butcher's knife.

"I believe cows are just as important as the human species," he said.

Mr Walsgott said since 2010 he has protected more than 200 cows across his eight sanctuaries, which include the Summer Farm and Conondale Sanctuaries on the Sunshine Coast hinterland, near Maleny.

I believe cows are just as important as the human species.

Mr Walsgott said it was his rural upbringing that encouraged him to open the charity.

"I saw the suffering that they had to endure at the hands of all the farmers in the district — it took a long time, but now I have a sanctuary."

Mr Walsgott said to protect the animals he buys them from local dairies and saleyards.

"The only way to save a cow in a western democracy, or a country that has a legal system with private ownership is to actually buy them, so I bought them and then went about providing care for them."

Mr Walsgott said the sanctuaries were funded by his savings and donations.

"My daughter sponsors a bobby calf, I sponsor a mother cow, and my son sponsors a bull," she said.

Ms Macklin-Rice said she came across the charity on social media and decided to go out to the farms and see what they were like.

I just try and give them the best life they can possibly have.

"I went out and connected with them watched their social circles, and then we each decided that we wanted to help out in our little way."

She said it was watching the cows interact like humans that inspired her to participate.

"It's nice to see that they are just like we are — they just want to be loved, they care about each other, they look out with each other."

Ms Macklin-Rice said her donations ensured the cows could survive.

"Sponsoring is so important, because it ensures that those cows will be fed for a year."

"I just try and give them the best life they can possibly have," he said.

"That also means providing not only just food care, vet care, I also try and provide an emotional life for them, so I try and give them their own little society that they can live in."

I also try and provide an emotional life for them so I try and give them their own little society that they can live in.

Mr Walsgott said his charity also worked to send a message to the meat industry about the significance of the animals, by purchasing the cows at market price.

He said he hoped this move would demonstrate the legal protection that cows deserved.

"I think that's what required, because if we want to get legal personhood for cows, we need to use the existing law to save them and not just rescue those cows who would otherwise not be able to be sold by cow farmers," Mr Walsgott said.

"Save a Cow flies in the face of the present system, because we value cows enough that we will keep them away from the slaughterhouse."