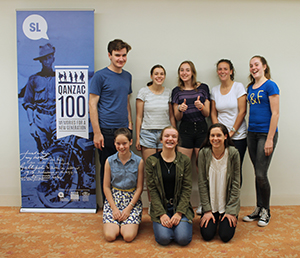 Education Minister Kate Jones today announced the eight student winners of the 2016 Premier’s Anzac Prize and the two teacher chaperones who will accompany them on a tour of Gallipoli and the Western front.

Ms Jones said students were required to produce two-to-five minute multimedia presentations about how the Anzac tradition had shaped Australia, why it was still important and how future generations could keep the tradition alive.

“I congratulate these eight students on their outstanding, informative and often emotional presentations which reflect on the Anzac tradition so well,” she said.

“I also congratulate the 58 Year 8 to 11 students from both state and non-state schools across Queensland who entered the competition.

“The significant time and effort students have invested in their entry has honoured the sacrifice of our soldiers and perpetuated the Anzac tradition.”

“Student winners are working with the State Library of Queensland to research and produce a portfolio of information about three service people, including their own relatives where applicable.

“The students will write up eulogies and then read these tributes aloud at the grave sites of these particular service men and women while overseas, leaving commemorative items of respect.

“This year’s student winners will play an important role as ambassadors for the Anzac tradition, keeping the Anzac spirit alive for future generations of Queenslanders.”

A list of the 2016 Premier’s Anzac Prize winners, teacher chaperones and further information is available at: www.education.qld.gov.au/anzac-prize.