Prime Minister Malcolm Turnbull has announced his new frontbench, emphasising the roles of his younger and female colleagues.

The new team will be sworn in on Thursday, boosting the number of women to six in Cabinet and 10 in the executive.

Victorian Nationals MP Darren Chester has been offered the Infrastructure and Transport portfolio previously held by Warren Truss, who announced his resignation earlier this week.

Senator Concetta Fierravanti-Wells will shift from Assistant Minister for Multicultural Affairs to the portfolio of International Development and the Pacific, while Craig Laundy will take over her old role.

Steve Ciobo will take on the role of Trade Minister and will work with newly-appointed special envoy for trade Andrew Robb, who also announced his resignation earlier this week.

Mr Ciobo was recommended for the role by Mr Robb.

Cabinet reshuffle: Who's going where?

Assistant Health Minister Fiona Nash is now deputy Nationals leader and as such she will move into Cabinet.

The Nationals have been offered another position in Cabinet, expanding the size of cabinet to 22 people.

Mr Turnbull described the new line-up as "a dynamic team which combines youth, new talent, experience, continuity, and a real sense of innovation and enterprise".

"It's a team that's focused on Australia's future, focused on the policies that will encourage innovation and enterprise," he said.

Finance Minister Mathias Cormann has added Special Minister of State to his role.

Former special minister of state Mal Brough today resigned from the ministry, saying he had asked the Prime Minister to not keep his ministries open for any longer.

"The nation deserves to have the ministries filled," he said.

Mr Brough again denied any wrongdoing and slammed the police for their lengthy investigation into the James Ashby and Peter Slipper affair, which has "taken so much longer than anyone could possibly imagine".

Stuart Robert has already resigned as Minister for Veterans' Affairs, Minister for Human Services and Minister Assisting the Prime Minister for the Centenary of ANZAC after a controversial trip to China with a major Liberal Party donor.

"He is not featuring in the National Party's ministerial line-up on this occasion," Mr Turnbull said.

"I want to thank Luke for his contribution in that profile. He's a great parliamentarian, great Coalitionist and he will be missed."

Senator Matt Canavan from Queensland will be sworn in as the Minister for Northern Australia.

There were also a number of changes in the assistant minister and parliamentary secretary ranks: 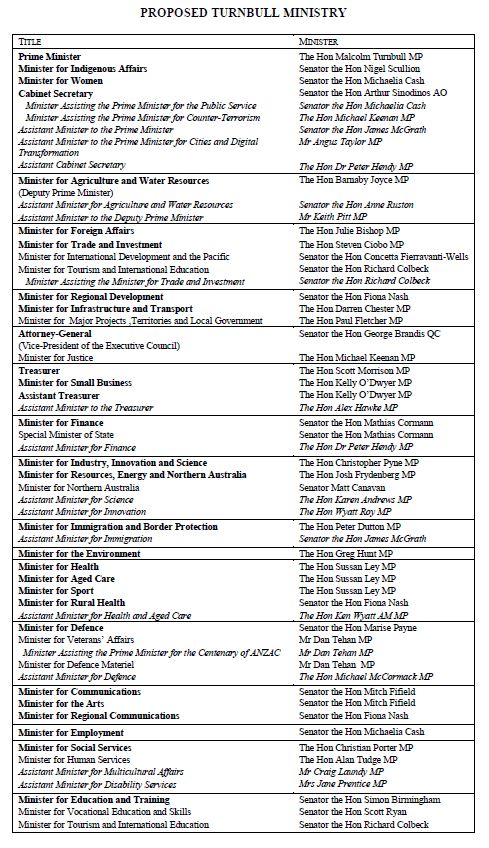