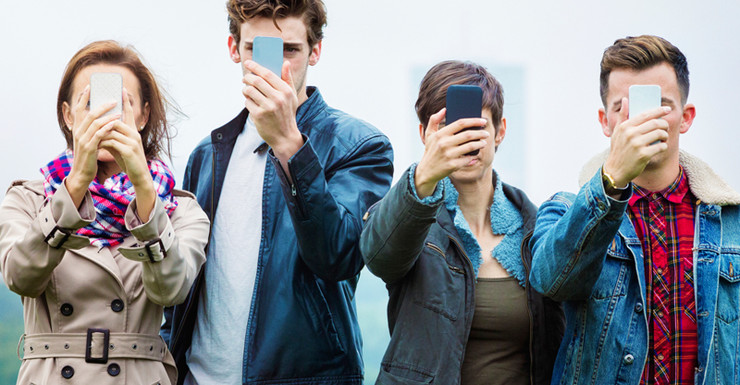 ‘Please just leave me and my phone in peace’

Sure, we use our smartphone everywhere. What’s so bad about that?

Every generation needs an evil, and the dreaded smartphone is our current enemy.

If you’ve been on the internet for more than 10 minutes, you’ve no doubt seen waves of opinion pieces, photo series and endearingly misguided memes all calling out our “smartphone culture”.

Apparently, only since the invention of the phone in the late 1990s have people been wrapped up in the electro-gauze of their private lives, obsessed with whatever is going on somewhere else. I mean, it’s not like we didn’t have Walkmans, Discmans, books, newspapers, magazines, local gazettes or whatever’s at the bottom of our handbags to distract us, right?

Not long ago, television was the ruiner of society.

“Of all the brats, legitimate and otherwise, sired of the entertainment business, the youngest, television, looks as if it would be the hardest to raise and to housebreak,” The Stage Magazine warned in 1939.

Those sentiments persisted for at least a decade. Women’s Christian Temperance Union spokesperson Elizabeth Smart called TV “alleged amusement completely surrounded by an atmosphere of crime and violence, relieved by plunging necklines and off-colour jokes” in Quick Magazine in 1952.

There are similarly scathing, pearl-clutching criticisms levelled at the smartphone, especially from the art world. Last year, an artist photoshopped out phones from his subjects’ hands, and another creepily showed users’ faces being sucked into their devices, to show just how supposedly obsessed we are.

Many of us eat up this idea of the “smartphone zombie” so much that we make false assumptions. Usually when I am on my phone, I am following the news, sending emails, promoting my articles (my job), listening to informative and interesting podcasts, doing crosswords, learning Spanish (thanks Duolingo!), chatting with mates and looking at pictures of dogs (for a happiness boost).

Sure, I may stray into mindless-scrolling, but I’m not abandoning my brain to stare at blobby colours and shapes.

An even better example is Deray McKesson, a leader of the Black Lives Matter movement, who is a non-stop tweeting machine. When you see pictures of McKesson at rallies or meetings, he is usually glued to his phone.

His constant updates and rallying cries are vital to this global campaign against police violence, and vital for his 290,000 followers. He gives a real-time, human viewpoint on a major social movement that one would certainly not find in the mainstream media.

Of course, most of us aren’t leading a social movement from our iPhones. We may simply be scrolling through Facebook on the tram or train, hearting holiday pics on Instagram and playing games. That’s totally fine too, because it’s only human to want time to ourselves.

If I’m by myself on the tram, what makes more sense: constructive work mixed with entertainment, or awkward conversation with a stranger about the weather? I’m not averse to the idea of making friends or chatting on the train, mind – I’m not some anti-social, humanity-hating creep.

But usually I just want to listen to Phil Collins, read the news or solve puzzles on my phone in peace. You think I wanna gabber about the rain at 8am?

I’ll admit, sometimes when I see a child playing on their parents’ iPhone (or even their own), I share the same panicky “they’ll grow up zombie loners!” concern of countless op-ed writers and photojournalists. I get the same feeling when I see a couple at a table in a restaurant, staring at their respective screens.

“Oh no, what a terrible relationship they must haveI” I think. Then I come back to Earth, away from the post-apocalyptic nightmare phone-world briefly in my head, and reason with myself: I don’t have children, but I can only assume it’s tough work. There’s only so much talking you can do to a child, or anyone for that matter. Sometimes you need a break.

Harbingers of doom decry the advent of the smartphone, or the tablet, but offer no alternative. Do they think the world would be better somehow if, ala some modern Pleasantville, we all doffed our hats to the grocer, curtsied to the mayor and chatted inanely to the trolley driver on the way to the sock hop?

What world is this, that these luddites live in, where before smartphones we all immediately and constantly chatted to perfect strangers for no reason?

It’s time we stop forcing people away from important work or relaxation with banal chit-chat or throwing nasty looks at women who take selfies on the bus.

Until then, don’t waste your time telling me off for being engrossed in my smartphone. I’ll have my headphones in, watching dog videos.