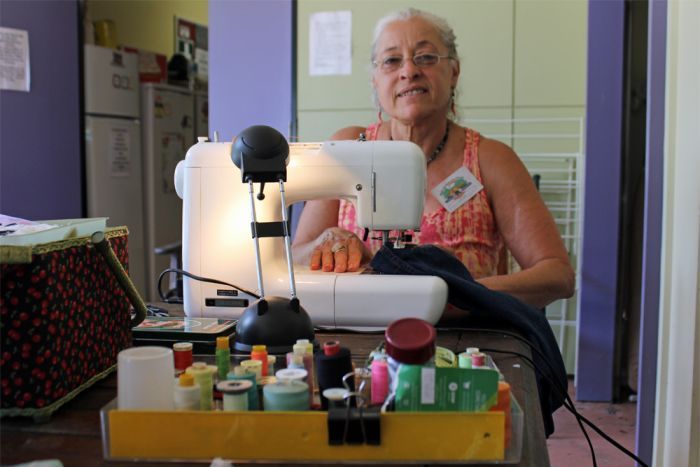 In an era of cheap mass production, a Sunshine Coast community is working to foster recycling and re-use of household items rather than throwing them away.

The Maleny Fix-It Cafe opened 3 years ago, and it encourages locals to bring in an item for volunteers to repair.

Jim Straker who has been managing the cafe for a year now said the cafe was working to change perceptions about consumerism.

"I think there's so many people so used to 'it's broken I'll throw it away and get a new one', rather than looking and seeing what can be done that might be able to keep it going," Mr Straker said.

"Sometimes people bring stuff in which is old and they've had it for a long while, and it really only needs a small amount of repair on it and they've got their loved item back rather than throwing it in the bin."

Volunteers come from a wide range of backgrounds including electricians, engineers, bicycle mechanics and professional sewers.

Mr Straker said today alone the volunteers worked on a bicycle, clothing, electrical appliance and even a vacuum cleaner.

He said the Fix-It Cafe helped to boost local businesses, by directing locals where to go for help.

"We're not trying to take away from the trades, if it's something quick we can help and if not we send it off to them."

Cafe customer and Maleny local Kerry Greene whose vacuum cleaner was fixed at today's meeting said she thought the cafe was a great idea.

"My major motivation is that I don't like throwing anything away because I don't like it to become landfill, so I'll bring it here to see if it can be fixed."

Another of Maleny's fixers is Josie Delle Baite.

Ms Delle Baite was once a professional seamstress who worked in the wedding industry, and while she had not worked on any prom dresses in the Fix-It Cafe, she believed her role helped give back to society.

"I just wanted to give back to the community and the planet to be a service because sewing is a dying art now, and I wanted to help people in need," she said.

Mr Straker said the cafe also hoped to expand by offering classes to Sunshine Coast locals so the process of repairing items could become more ingrained in society.

"If you give a man a bit of fish and a loaf of bread you can feed him for the day, but if you teach him how to fish and how to cook the bread, he will know for life," he said.

"A lot of people really need to be shown what they can do, and then they'll do it themselves."