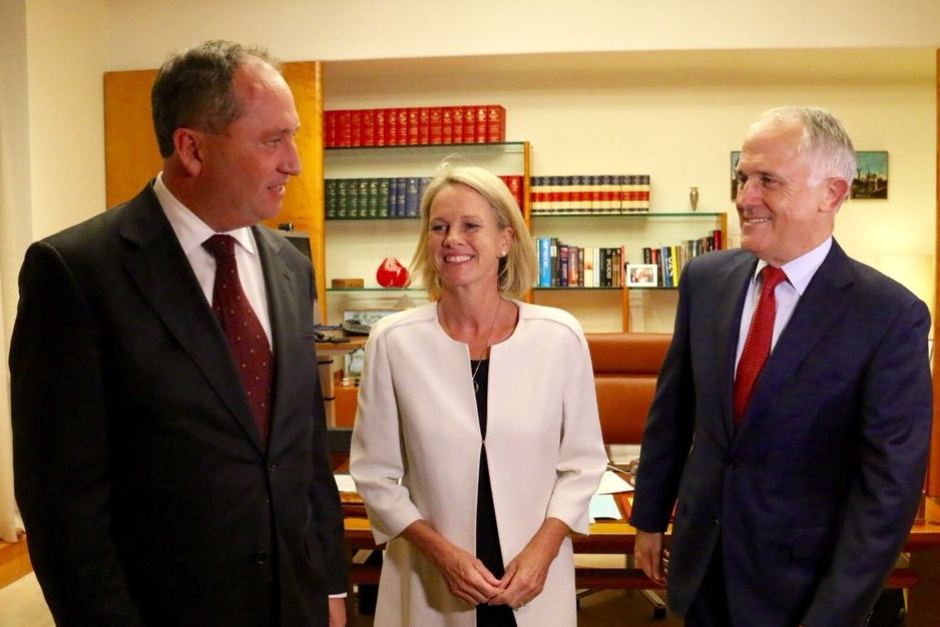 Barnaby Joyce has been elected unopposed as leader of the Nationals, following a party-room meeting at Parliament House in Canberra.

He will take over the position of Deputy Prime Minister from Warren Truss, who has announced he will not recontest the next election.

Senator Fiona Nash has been elected as deputy leader of the Nationals.

"Within the next few years we will continue to build on the exceptional work that has been done by the most recent giant of our party, Warren Truss," Mr Joyce said.

"And we would be doing the same things we have always done, focusing on those people outside the major capital cities, who need us to fight for them."

MP George Christensen, the returning officer for the partyroom ballot, told reporters seven MPs put their hands up for the deputy position.

"Barnaby will be the new Deputy Prime Minister and we look forward to having Fiona in the Cabinet. I can assure you that both of them will be fierce advocates and fighters for rural and regional Australia," Mr Christensen said.

"If there is one great legacy that Warren Truss has left the National Party, it is a sense of unity and loyalty and that will continue under this new leadership.

"We are all very good mates and we're going to continue to be, even though some people missed out tonight."

The vote was a secret ballot.

Prime Minister Malcolm Turnbull congratulated Mr Joyce and Senator Nash in a brief meeting at Parliament House in front of the media.

"I'm very pumped up, I think it's a great result and I think this will be a very formidable team. We haven't got long to go to the election," Mr Turnbull said.

"Really, really exciting, looking forward to working with you both. Well done Nats."

"It's momentous and I'm looking forward to showing the Australian people that you're in safe hands," Mr Joyce said.

Mr Joyce was elected to Parliament in 2004 as a Queensland senator, but moved to the Lower House seat of New England in 2013.

The Agriculture Minister had been considered by many in the party to be the heir apparent to Mr Truss, despite internal divisions over his often unpredictable and outspoken nature.

Mr Joyce created headlines last year when he publicly threatened to put down two dogs owned by actor Johnny Depp, after it was revealed the animals were not quarantined on their arrival in Australia.

The changing of the guard within the Nationals will also be the trigger for a Cabinet reshuffle within the Federal Government.

Mr Truss's retirement also means the Infrastructure and Regional Development portfolio and the safe Nationals seat of Wide Bay in Queensland will be up for grabs.

The outgoing Nationals leader was first elected to Federal Parliament in 1990 and served as Trade and Agriculture Minister under the former Howard Government.

Mr Truss told reporters at a press conference in Parliament earlier on Thursday he had "every confidence" in Mr Joyce.

He also revealed the Prime Minister had agreed to increase the number of Nationals in Cabinet from three to four.

All four major political parties in Australia now have female deputies as a result of the partyroom vote.

Senator Nash is the Minister for Rural Health and will be elevated to Cabinet.