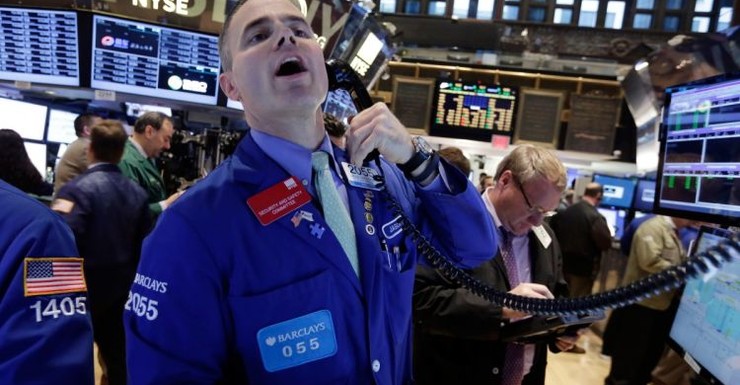 The shakeout through the global banking sector means Australian lenders are finding it harder to get a loan and rates may rise further.

Homebuyers are already beginning to feel the pinch as Australian banks toughen their lending criteria in response to tightening regulations and the emerging turmoil on international financial markets.

On Tuesday, the Australian share market suffered its biggest one-day fall since September, losing around $42 billion in value.

Banks were the biggest losers, with the financial sector index down 4.1 per cent – and it could point to a rout on world markets that is reminiscent of the Global Financial Crisis.

Australian banking shares have tumbled dramatically with the financials index down 11.6 per cent since January and 19.6 per cent for the year.

In Europe, things are worse with the banking index down more than 20 per cent since January. German banking heavyweights Deutsche and Commerzbank lost more than 7.4 per cent on Monday night and shares in three big Greek banks slumped 27 per cent overnight on Tuesday.

The pain from all that is not only being felt in share portfolios and superannuation accounts –it is starting to affect homebuyers.

“The mortgage market has become a lot tighter in the last month or so,” said Bernie Kuran, managing director of Elite Mortgages. “The banks are changing their lending criteria.”

Mr Kuran said banks provide spreadsheets to mortgage brokers where client information on details like income, living expenses, total debt and dependants is fed in to determine whether applicants are eligible for the loan they want.

“We had clients who got a positive result from the spreadsheet then suddenly it turned to a negative,” Mr Kuran said.

The changes came because the banks have toughened their approach to lending to insure their profits in a deteriorating financial environment.

Mr Kuran said “there’s lots of calculations behind the spreadsheet that we don’t see” so brokers don’t know all of the criteria changes.

However “the banks previously said a family of five needed to have $2000 a month for costs like food, entertainment and transport but now to qualify you have to have $4000”.

There are two sets of factors behind the changes. The big Australian banks raise around 30 per cent of the money they lend by issuing bonds in foreign markets.

The recent turmoil is making that overseas capital much more expensive as this chart on credit default swap (a type of insurance for market lenders) spreads shows.

The price of swaps is up from an average of 0.83 per cent to around 1.20 per cent because lenders are getting skittish and want more risk money to lend.

In Australia, bank regulators are demanding the big banks raise the amount of capital they put aside for each $100 lent from $1.60 to $2.50 by July 1 this year.

On top of that, the cost of money for investment housing loans has been pushed up with investors having to pay 0.25 percentage points above the owner-occupied rate, further raising the cost of money.

BIS Shrapnel property analyst Angie Zigomanis said the banks are also toughening up on loan to valuation ratios where “you might get a loan at 80 per cent of valuation but not the 90 to 100 per cent we might have seen in the past”.

To date the Australian banks are doing better than many of their international counterparts.

“There is some concern about Australian property where there might be more downside than upside in the Sydney and Melbourne markets.”

If the property market weakens significantly the banks will likely continue to toughen lending criteria to protect their balance sheets against the falling house prices.

Banks are also toughening lending requirements by not factoring in the total tax benefits springing from negative gearing. Someone who has a $300,000 investment loan at five per cent interest might get a tax benefit of $15,000 but now the bank will only accept $5000 of that in the income equation for a loan, Mr Kuran said.