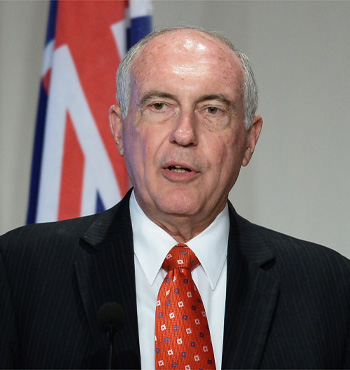 A ministerial reshuffle is expected in the wake of two senior members of the Turnbull government retiring.

Prime Minister Malcolm Turnbull faces a cabinet reshuffle just months out from a federal election after Trade Minister Andrew Robb became the latest retirement in a recent exodus of key players from the Coalition ministry.

After 12 years in parliament, Mr Robb, 64, announced on Wednesday evening that he would not contest the next election.

“At 64 and in excellent health I plan to move on to my next career, which will be in some capacity in the private sector,” he said in a statement.

“I will leave politics in the comfort of knowing both the Turnbull government and the Coalition are in great shape.”

It came as a surprise to many, unlike the predicted resignation of Deputy Prime Minister Warren Truss.

Cabinet Secretary Arthur Sinodinos told Sky News that Mr Truss, 67, would have more to say about his future on Thursday, while Nationals sources also expected him make his retirement intentions clear then.

“I would encourage them to stay as long as possible,” Mr Sinodinos said.

Speculation earlier this year indicated the Nationals leadership would soon be up for grabs. Deputy Barnaby Joyce indicated in an interview with Fairfax Media in January he would “throw my hat in the ring” if Mr Truss retired.

But the race is open for the Nationals deputy leadership.

The exits, which followed the December resignations of Mal Brough and Jamie Briggs, present Mr Turnbull an opportunity for a major ministerial reshuffle.

The future of Human Services Minister Stuart Robert has also been thrown into doubt, after a controversial trip to China, which he claims was private, where he met with senior Chinese officials.

Mr Robert is the subject of an inquiry – which could report back as early as Thursday – into whether he breached ministerial standards by helping a friend and Liberal Party donor sign a mining deal in China in 2014.

Opposition Leader Bill Shorten seized on the news, saying the Cabinet is in chaos.

“It’s only a matter of time before Malcolm Turnbull stands in his courtyard to tell Australians that good government starts today,” he said, referencing his predecessor Tony Abbott.

“Malcolm Turnbull should be focused on Australian jobs, but he is completely paralysed by ministers who are only worried about their own.”

The Trade Minister’s resignation brings 12 years in parliament to a close, while Mr Truss was elected in 1990.

Formerly a federal director of the Liberal Party, Mr Robb served in the Abbott and Turnbull governments in the trade and investment portfolio.

He briefly stepped down from the Opposition frontbench in 2009 to address a form of depression he had suffered since adolescence.

Mr Truss was a farmer before he began his 26-year political stint.

He served in multiple portfolios, including Minister for Trade, and Agriculture, Fisheries and Forestry under John Howard. He took over as leader of the Nationals after the Coalition lost the 2007 election.