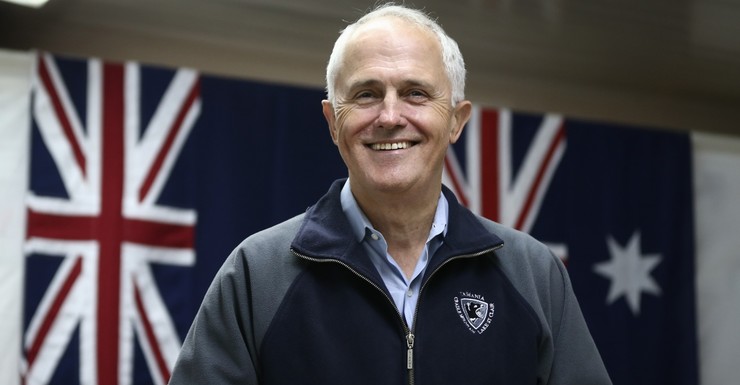 The latest poll suggests the PM’s shiny new crown is beginning to dull.

Remember the old days when politicians dismissed opinion polls? The only one that counts – election day – was the fallback especially when support dipped or crashed.

No one ever believed it then and they certainly don’t now. Especially when Malcolm Turnbull cited 30 bad Newspolls in a row as a major reason for his lunge at Tony Abbott.

What, of course, gives cache to the latest Newspoll is the fact that this is an election year. We could be fronting the ballot box as early as July.

Make no mistake, the 50-50 result is sending shudders through the Coalition’s marginal members. Newspoll, of all the polls, is the one they take most notice of.

Immigration Minister Peter Dutton channelled former PM Kevin Rudd when he was asked about it.

“The prospect of Bill Shorten leading the country is now in play,” he said.

He repeated it in a couple of interviews.

Back in June 2010, Mr Rudd applied the same logic when the Coalition drew level with Labor.

“These polls if they are reflected on election day Mr Abbott would be next Prime Minister.”

The thought is scarier to whoever is losing support than to the voters. And that’s the worry for MPs who turned to Mr Turnbull to save them.

It almost certainly explains why the “button down” Prime Minister of the last six months is, as Labor taunts, “channelling his inner Tony Abbott”.

Mr Turnbull’s full-frontal attack on Labor’s negative gearing tax proposals is more than enough evidence. It is, he told parliament, a threat to residential housing and it’s a threat to the economy.

Except for blatant vested interests considered, expert opinion is against him. He ignores the concerns of the Reserve Bank, APRA, the Productivity Commission and the Murray Financial Inquiry.

It resurrects the business-as-usual politics Mr Turnbull said he was here to replace. Offering voters considered argument, not insulting their intelligence and not running half-baked strident scare campaigns were all part of a very welcome package.

While we are still none the wiser just what the Turnbull-Morrison tax reform package will look like, it is shrinking by the day. In another retreat, the Prime Minister ruled out touching the capital gains tax in Question Time.

Makes you wonder what multi-billion-dollar concessions to the top end he will be game enough to tackle? The package’s main attribute will be not to scare the horses or the voters.

That almost certainly means it will be even less ambitious than the Rudd-Swan tax reforms released days before the 2010 election-year budget.

The Labor duo retrieved a couple of taxes out of the Henry Review – who can forget the mining super profits tax? They ditched or shelved a hundred or so more reforms.

The word is Henry has been dusted off again, probably only to be put back in the cupboard for another day.

The inelegance of the tax conversation started when Mr Turnbull put all options on the table, only to retreat clumsily from touching the GST. That has clearly left voters unimpressed.

He and the Turnbull cabinet had to start from scratch was the distinct message.

“We only started that process of looking at all those areas in September of last year after there was a change. They were not under consideration before that,” Mr Morrison said on Friday.

“It is simply not true that the government only started looking at tax issues last September,” he said in a statement.

Labor is convinced the election will be a double dissolution in July, no matter the other complications. Arranging supply and disrupting Senate terms are just two.

The thinking is Mr Turnbull will go while he still has enough shine left. His crown is slipping but he is far more popular than Bill Shorten.