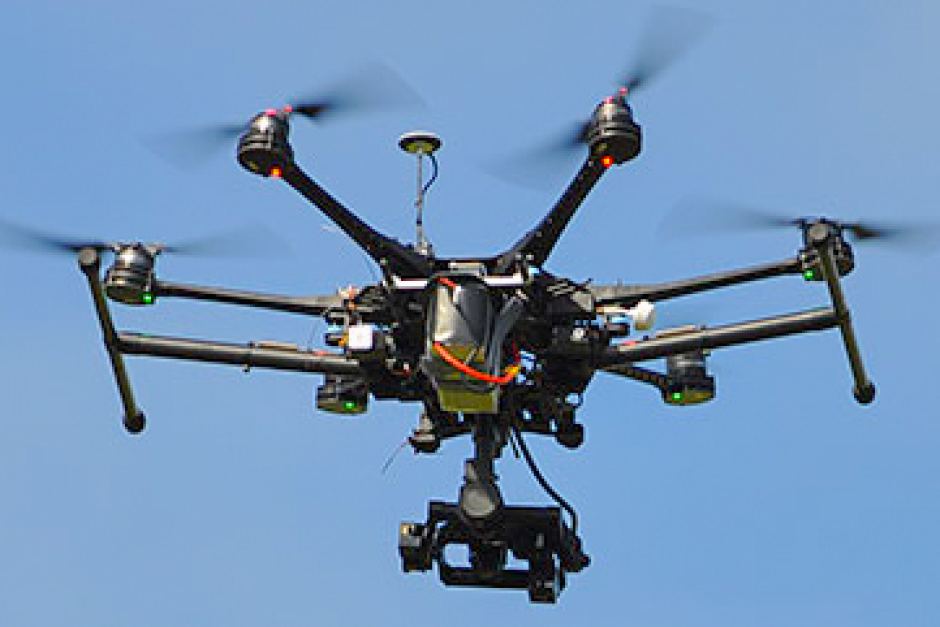 Where there be a drone first and foremost act responsibly

If you are lucky enough to have unwrapped a "remotely piloted aircraft" for Christmas, make sure you know the rules and regulations before you take your drone to the skies.

That is a message from enthusiast Peter Hogg.

The Olympic Winter Institute sports physiotherapist is cautioning amateur RPA pilots to read up on the Civil Aviation Safety Authority guidelines as well as make sure they have the safety of other people in the forefront of their minds.

Mr Hogg became involved with RPAs six years ago with the aim of providing video with a point of difference for his wife's Hive Swimwear brand.

"We were filming in 2010 for Fashion TV and were pushing for something very unique," he said.

"It was very successful with over 400,000 views on social media and international TV broadcasting.

"The video we captured at Fraser Island was amazing and we were super safe in my opinion."

The clip, titled Hive Swimwear - Around the World, also caught the attention of CASA, which issued Mr Hogg with a $600 fine for using his RPA for a commercial purpose without the proper licensing.

"I'm okay with it (the fine), it shows how serious this was," he said.

"At the time it was very unclear what the rules were, but now they have tightened up a bit and we've been responsible, trained up and acted according to the law since."

Mr Hogg underwent a five-day "full-on" RPAs course, which included a practical and written examination at the end to obtain a manufacturer's licence.

The next step is to become registered with CASA.

Mr Hogg said a lot of people were "running the gauntlet" by using their RPAs to make a quick buck without the proper qualifications.

"That's illegal and could bring infringements," he said.

"The issue I have with people operating drones without the proper training is the safety implications.

"If a motor fails, you can't control it and it will fall out of the sky.

"My other question to people making money on it is, do you have insurance? It would cost around $2000, which is quite a cost if you only want to do this work part-time."

Bennett and Philp Lawyers director Mark O'Connor said not many people considered the impacts of an RPA accident.

The compensation law expert said although drones were a relatively new technology in Queensland skies, he believed negligence rules would apply to them.

CASA can issue drone users with fines of up to $9000 in serious cases of rule breaches, but Mr O'Connor said the wider injury problem might arise more from "official" drone use.

"The privacy issues are a subject in themselves, but for personal injury I expect it would boil down to the principles of negligence, and if a member of the public sustained an injury they would have a claim against the owner or operator if they could establish their injury was a result of negligence," he said.

Mr O'Connor said the operating of RPAs would inevitably attract more scrutiny and the negligence issue could likely be tested in compensation actions if it was shown an owner or operator ignored safety concerns or flew an RPA in a manner that endangered others.

"There are some grey legal areas too. If a drone operator is legally liable for injury caused by their device,

what's the liability if the operator is a child?" he said.

"The privacy issues are potentially huge too with these little gadgets zooming over your house, fitted with cameras and filming you."

Organisations need to apply for an operator's certificate, which involves the development of an operations manual and risk assessment, as well as flight and maintenance manuals.

Individuals who wish to fly RPAs commercially also need a controller's certificate, which is a licence.

"There are two ways of getting a controller's certificate," Mr Gibson said.

"The course is competency based and comprises a combination of theory and practical training.

"Upon successful completion of the course the provider will apply to CASA on behalf of the trainee for a controller certificate.

"The alternative is you get a pass in an aviation licence theory exam ... manufacturer's type training on an unmanned aerial vehicle platform and five hours of flight time on the UAV platform for which the training was received."

Mr Gibson said there was a six-month wait for operator's certificates due to the large number of applications.

CASA charges between $4000 and $5000 for processing and assessing applications for a UAV controller's certificate.

The cost of training for controller's certificates varies between providers.

"Hence the need to understand and demonstrate a knowledge of aviation theory and regulations.

"The actual flying requirements are much less onerous than for being a pilot of an aeroplane or helicopter."

But if commercial flying is not on your horizon, recreational users must remember the following:

Detailed information is at http://www.casa.gov.au.