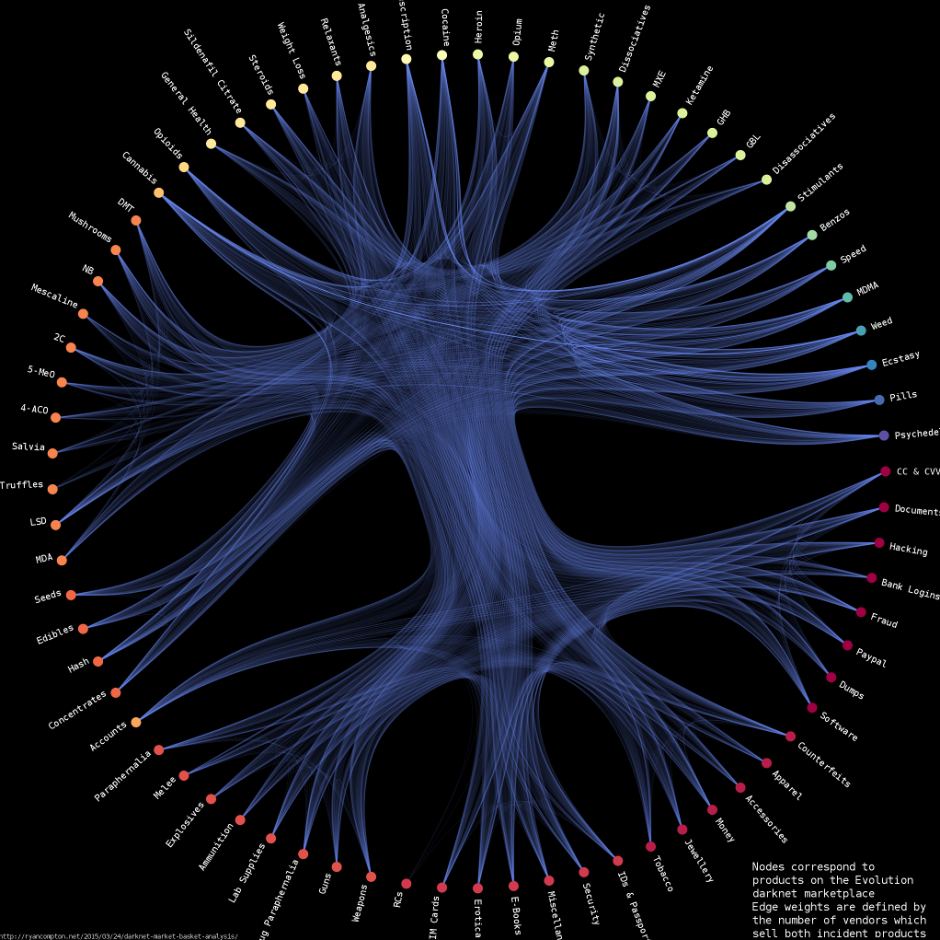 What is the dark net, and how will it shape the future of the digital age?

The dark net has continued to make headlines over the last decade as a mysterious part of the internet where criminals lurk and engage in illegal activities, all from the privacy of home computers.

Stories of the infamous Silk Road drug market, where users can order illicit drugs online, may come to mind. Or perhaps you have heard about the anonymous digital currency, Bitcoin.

But for all that is written about the dark net, most people would be hard-pressed to explain it.

Here is a simple, user-friendly explainer of what it is, how it is used, and the questions it raises as we drift deeper into the digital age.

What is the dark net?

The dark net generally means using the internet in a manner that is difficult for authorities or non-state actors to monitor. This is usually achieved through encryption or by layering networks.

It might sound complicated, but for the majority of dark net users this is done simply with software that is downloaded for free and opened, just like ordinary, everyday software.

For example, most internet users would not know how to manually "mine" server databases in order to index websites based on keywords. But everyone knows how to use Google, and dark net applications aim to be just as user friendly.

For website browsing, users can simply download a browser called Tor, for free, through which they can anonymously access a variety of websites not normally available on commercial browsers.

A key difference is that dark net websites typically have an irregular web address, such as Facebook's dark net Tor address: facebookcorewwwi.onion.

For the most part, the dark net is not used for illicit purposes. It is filled with activists' websites, anonymous stock traders, information databases for journalists, political chat rooms, instant messaging services, artist platforms, as well as the WikiLeaks portal where whistleblowers can submit information anonymously.

The Tor Facebook example above is particularly useful in nations where the use of the social media platform is unavailable or illegal, such as in Nauru, where it was banned in April 2015.

While Tor is the most famous browser, it is also just one of many dark net tools available.

Instant messaging program Wickr — the same Wickr that Australian politicians use to talk to each other — is another common tool used in association with the dark net.

Different dark net software tools do different things. For example, Tor bounces your browser's request around the world before reaching its destination, and in the process obscures where the signal came from and where it went to.

Layering a variety of dark net software tools in combination — like Tor and Wickr — essentially makes it very difficult for anyone to follow your online activities.

So the dark net is not necessarily a place but more a way of using the internet that can be used for good or bad.

It is only because media headlines referencing the dark net usually involve drugs or illegal activity, and the use of the word dark usually gets conflated with sinister when it more appropriately just means hidden or difficult to follow.

How do the dark net markets work?

Using the dark net for illicit purchases is done in almost exactly the same way as using the regular internet to make trades and purchases, however a few basic measures are put in place first.

Instead of just hopping online and opening a browser, users will first open two or three applications that run in the background of their system that ensure everything they do is obscured and encrypted.

The most basic of these is a Virtual Private Network (VPN), which essentially tunnels users' activities across a public network so that data can be sent and received privately.

What is the Silk Road?

VPNs are not technically obscure and difficult applications, they are legal, user friendly and available for all to download and use.

In fact, many companies and organisations use VPNs to avoid security breaches, often without staff and users even realising, as they run quietly in the background.

Once a VPN is activated, users can then launch Tor, further layering their activities within the "dark net".

The last piece of the dark net market puzzle is Bitcoin, a digital anonymous "crypto-currency" which can either be bought online via bank transfer or even at ATMs in most major cities.

Once these measures are in place, users then access their website of choice via Tor, find an illicit product they want and click buy to send their Bitcoin.

Then, just like ordering on Amazon or eBay, the postman himself will deliver the item the next day — stamped, with a name, address and return address — exactly the same as if concert tickets or a pair of jeans had been ordered online.

However, rather than a pair of jeans, the item could be a handgun, a fake passport, or half a kilo of heroin, all of which are commonly available on dark net markets.

That the process is so easy is exactly why it is so widespread and currently favoured in non-technical-savvy criminal circles and amongst young people, and hence presents a game-changing threat.

Also, all of the components used by dark net markets — Tor, Bitcoin, VPN — are legal. However, when used in combination, they allow an easily accessible level of security within the "dark net" that makes it ideal for illicit purposes.

How do illicit orders translate to 'the real world'?

The illicit packages generally pass undetected because the packages are designed to be unremarkable — known as "stealth" — and it is illegal for postal services and police to open non-suspicious packages.

The process is also premised on the idea that even if authorities seize an illicit package, the heavy encryption tools that users make use of generally ensure that there is no easy way to prove in court that the sender or receiver actually made the transaction, and that it wasn't just randomly sent to or from a wrong address.

Can't tell a bitcoin from a blockchain? Read our explainer to see how the cryptocurrency works.

To further complicate the matter, the dark net has allowed for large volumes of minor trades — such as purchasing a small amount of marijuana or ecstasy, traditionally done on a street level — to cross jurisdictions.

For example, teenagers in Perth may now be buying small amounts of illicit substances from a dealer in Sydney, an unprecedented phenomenon that has further complicated interstate jurisdiction.

So what the dark net has done is convolute the war on drugs — as well as other issues it touches — by modifying it into a cyber-privacy issue where the police, the postal service, and internet providers are implicated against each other in a bureaucratic quagmire.

To make matters worse the dark net marketplace, in terms of net trade, is no small-time operation. When Silk Road was shut down, that market alone had seen the exchange of $1.7 billion in two years, and the markets have only grown since.

Also, in the process of cracking the Silk Road, police involved in the investigation reportedly began their own markets or partnered with vendors to cash-in on the new cryptic technology once they learned how to use it.

Is there any way to stop this?

What the dark net has done is cut straight to the heart of the debate of an individual's right to privacy with regards to the digital age, and the governments who use the same technology are aware of the dilemma it presents.

Tor was initially created by the US military, and the dark net generally employs the same software that many civilians, corporations and politicians use daily for protection. So the line on who should have access, how much and why becomes a matter of contention very quickly.

Photo: The disclaimer placed on the Silk Road after seizure of property by the FBI. (Commons: FBI)

As the FBI's director James Comey said earlier this year: "When the government's ability ... to see an individual's stuff goes away, it will affect public safety. There is simply no doubt that bad people can communicate with impunity in a world of universal strong encryption."

A spokesperson from the Australian Federal Police told the ABC that "online crime has evolved in an environment that offers a degree of anonymity and global reach across jurisdictions".

It added that it was only able to comment on international trade, and that state level police have their own departments dedicated to domestic issues.

"For operational reasons, we cannot disclose the methodology used to investigate this activity," a spokesperson from the Victorian police told the ABC, but added that their "E-Crime Squad is constantly increasing their skills and training to make sure they keep up to date with changing methods used by people selling and buying [illegal] items online".

In August 2015, Interpol launched a dark net education program that offered training on how to use dark markets, engage with and track individuals, and shut down major vendors.

But the problem of cracking a single individual or network on the dark net, while far from impossible, is a tedious task. As such, law enforcement has been required to pick its battles.

For example, to identify and rein-in Silk Road's founder Ross Ulbricht in 2013 it took more than two years of dedicated work, training, monitoring and the deployment of immense resources.

In that time, about a dozen new, more sophisticated markets were created, with better security and a more anarchistic philosophy driving them.

Cracking down on illicit dark net services also has the potential to raise ethical and legal questions with regards to the boundaries of law enforcement.

The creators of Tor responded in a statement: "Civil liberties are under attack if law enforcement believes it can circumvent the rules of evidence by outsourcing police work to universities."

"If this kind of FBI attack by university proxy is accepted, no one will have meaningful [right to privacy] protections online and everyone is at risk."

The university denied the reports, and the FBI called them "inaccurate", but as Wired reported, the FBI "declined to say which part of it was untrue".

Where to from here?

The inescapable situation is that dark net is here to stay.

In coming years, advocates say, governments will be tasked with drafting and implementing more nuanced cyber laws that detail what kind of encryption and privacy tools can be used, by whom, and for what purposes.

With the rise of computers and digital networking over the past four decades, governments have had to draft cyber laws, and the same will apply to dark net technology.

But as the world becomes increasingly digital, so will crime.

The internet gave us Google, email and rich information, but it also gave us cyber-bullying, mass pornography and Ashley Madison.

The dark net should be expected to present the same dichotomies, which in turn will pose its own set of social questions, including about how much we value our right to privacy, from the individual level to the organisational level.

Advocates maintain that in order to come to terms with the potential implications of the dark net, societies will be forced to finally develop concrete answers to these as-of-yet vaguely answered questions.

Note: Australian authorities said that while it is not an offence to use the dark net, it warns anyone engaging in illegal activity through it that their identity will not always remain anonymous and when caught, they will be prosecuted.