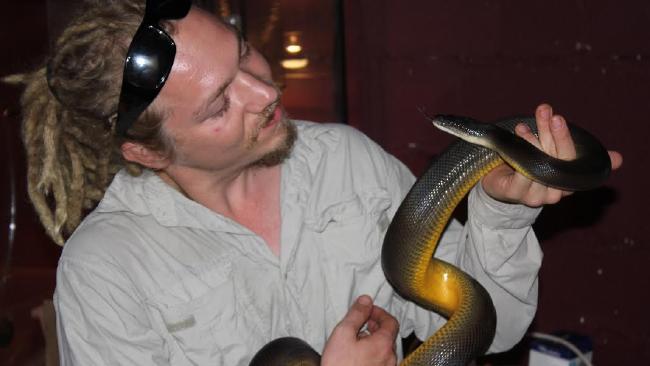 “It was a one and half metre long water python, I’d say between five and ten years old,” Mr Torkola said.

“Water Pythons can be a little bit snappy but this one was quite happy to be handled, which let’s me know this one was a pet and we’ve nicknamed it Cuddles.”

The other key indicator is Water Pythons, or Liasis fuscus, do not naturally occur as far south as Brisbane.

Mr Torkola could only hold the snake for 72 hours at which point he had to take it to the Department of Environment and Heritage Protection.

“In South East Queensland between 20 and 30 reptiles are handed in to EHP each year,” a departmental spokeswoman said.

“This number is expected to rise with the increasing popularity of keeping reptiles as pets.

“EHP has a number of reptile holding facilities around the state.

“Any escaped reptiles that are not claimed can be adopted by licenced keepers through RSPCA Queensland’s rehoming program at Wacol.

“Select reptiles which come into EHP’s possession through its ongoing compliance program are also available for adoption through the RSPCA’s rehoming program.

“In Queensland native animals are protected under the Nature Conservation Act and taking or possessing them without a permit is against the law, with penalties of up to $353,400 or 2 years imprisonment for an individual.”