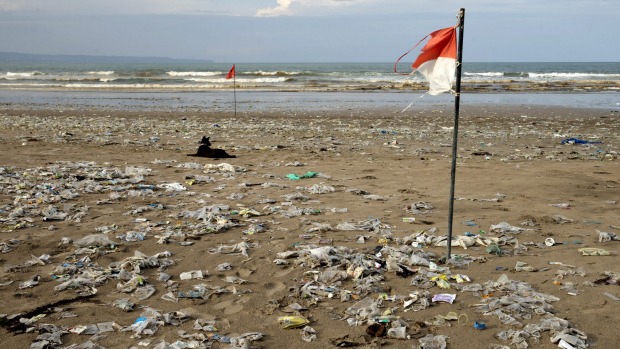 The age of the humans now upon us The Anthropocene

Humans have produced enough concrete to thinly pave the entire surface of the Earth, while carbon dioxide emissions are rising 100 times quicker than at any time during the past 800,000 years.

Such dramatic transformations of the planet are showing up in the world's sediments and warrant the declaration of a new geological epoch - aptly known as Anthropocene to reflect humanity's role - according to a new paper published in the journal Science.

The research, compiled by two dozen scientists and academics, identified planet-wide impacts ranging from nuclear fallout from weapons testing to mining that displaces 57 billion tonnes of material a year - or almost three times the amount of sediment carried by the world's rivers.

Will Steffen, an adjunct professor at the Australian National University and a co-author of the research, said the Anthropocene epoch was quite unlike previous eras - such as the Holocene that began 11,700 years ago - that are defined by natural processes.

"We have very good evidence that the Holocene should last for another 50,000 years without human interference," Professor Steffen said.

The impact is global, with more than half the land surface transformed for humans' use, while plastics and other pollutants are also affecting the oceans. The scientists estimate the changes support the new epoch as having begun about 1950.

"There is a whole lot of evidence that says there were human imprints [on Earth] at various points, some of it quite significant," Professor Steffen said.

"But you really don't see the Earth's system as a whole being affected until the second half of the 20th century and beyond."

Naomi Oreskes, a Harvard professor of science history, said the rising levels of carbon dioxide and the climate change they were driving, could dwarf other impacts over time.

"Already, the CO₂ influence is the most important and damaging [piece of human activity] if left unmitigated," Professor Oreskes said.

The related impacts of ocean acidification not mentioned in the report are still to come, Professor Oreskes added.

"If left unchecked, it will ultimately affect the abundance and distribution of marine life, and that will show up in the geological record in terms of the fossil assemblages."

Along with the rapid human population growth, technological advances and economic growth were altering the environment, the paper said.

Enough plastic is produced each year to wrap the planet, and enough aluminium to cover Australia, Professor Steffen said.

Half of the concrete produced has been poured in the past 20 years alone, as impacts accelerate, the paper said. Historically, production is in the order of 50 billion tonnes, or enough to cover every square metre with a kilogram of concrete.

The research, by the Anthropocene Working Group, is part of a larger body of work that will be presented later this year to the International Commission on Stratigraphy, a part of the International Union of Geological Sciences (IUGS). Stratigraphy is the branch of geology that studies rock layers.

The Anthropocene would be the third epoch after the Holocene and the Pleistocene, which make up the Quaternary period starting 2.58 million years ago.

The commission will decide if there is enough evidence to warrant formal scientific recognition of a new age of humans and set new global standards.

Andrew Glikson, an ANU paleoclimate scientist who was not one of the authors of the report, said "there are several stages" to mark the arrival of the Anthropocene epoch "starting tens of thousands of years ago".

"This formalisation [of the new epoch] belongs more in legalistics, not in science," he said.

The formal recognition of a new epoch induced by humans would be far-reaching, said Duanne White, an Earth systems professor at the University of Canberra, currently conducting field research in Antarctica.

"Practically, the markers of disruption in the environment provide a way for us to correlate landscape scale around regions and the planet, enabling us to better understand the way Earth systems work," he said via email.

Still, the declaration of a new epoch should make mankind more aware of its influence on the globe, Professor White said.

"We actually have the power to change the course of the Anthropocene because it's caused by us," Professor Steffen said.

"We're leaving the Holocene but this isn't something we have to accept," he said. "We're causing us to leave ... so we can likewise pull us back."