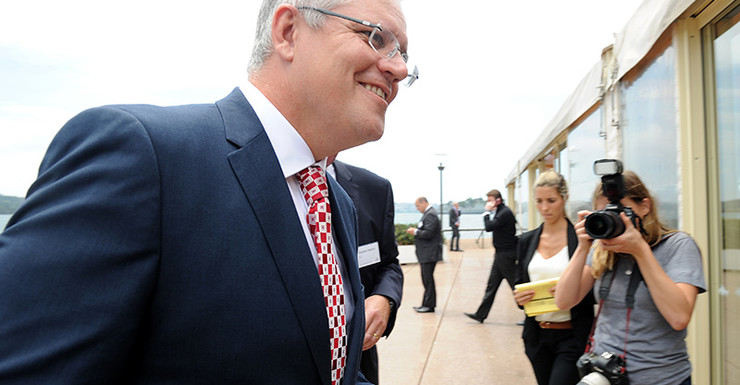 Political players jostle for position to prepare for election to be held by January 2017.

The government, or at least its Treasurer Scott Morrison, appears to have thrown caution to the wind by risking electoral oblivion and taking a GST to the next election.

Telling the media last weekend that is was important to get a “strong mandate” at the next election in case of an obstructionist Senate, the Treasurer committed to putting any “substantive” changes to the tax agenda “to the Australian people before an election”.

He also appeared to rule out extending the GST to heath and education, saying the reasons for originally exempting the services still applied today.

But Mr Morrison’s attempt to get a constructive discussion going on the GST before parliament resumes next week was summarily derailed – not by Bill Shorten’s tour of Australia’s vegetable aisles – but by arch-conservatives within the government.

Abbott does a Kevin

Firstly former Prime Minister Tony Abbott announced that, by popular demand, he’d be seeking endorsement to recontest the seat of Warringah at the federal election.

After being defended by supporters who denied he was anything like a certain jet-setting former PM, Mr Abbott then promptly did a Kevin and zipped over to the United States to spruik his wares on the international stage.

This involved giving an address to the Alliance Defending Freedom, an innocuous-sounding organisation that claims to “defend human rights such as free speech and religious freedom”; particularly the human right – it would seem – to restrict marriage to only those unions that involve a man and a woman.

Mr Abbott told his audience in New York City – apparently with a straight face – that “we need less ideology and more common sense”, but then argued gay marriage would “damage the institutional traditional marriage”.

Meanwhile, back home, some of the former leader’s conservative colleagues ran amok on the same topic, vowing to ignore the results of any plebiscite that voted in favour of gay marriage.

Interestingly, Mr Abbott appears not to agree with the self-proclaimed SSM rebels, noting in his New York speech that a plebiscite was the “best way to decide something that’s so important but so personal” and that it lets “the people decide so that the decision, whichever way it goes, will have their authority”.

Labor flicks the switch to Gonski

In doing so, the Opposition gave the Government an opportunity to deflect media attention from its infighting by shrieking, “look over there, Labor’s being profligate again!”

Prime Minister Turnbull even got into the act, promising not to get into a bidding war with Labor, to ensure the year did not include “a fistful of dollars election campaign – from us, anyway”.

Perhaps the PM was only getting back at Labor for the needling Bill Shorten gave him earlier this week over Australian becoming a republic.

Mr Shorten has made a habit of raising the ‘R word’ each Australia Day, in the hope of engendering even a spark of community interest in ditching the Queen as our otherwise independent nation’s official Head of State.

Last year, the Labor leader’s call was intended to emphasise the archaic sensibilities of the then-PM, Tony Abbott, who was the first National Executive Director of Australians for a Constitutional Monarchy.

However there was an added element of delicious irony to Mr Shorten’s suggestion this year, given the current PM used to be the chairman of the Australian Republican Movement.

In calling for Mr Turnbull to stick to his principles and stand up to the monarchists in the government, Mr Shorten clearly knew he was wedging the PM on the issue.

No doubt Mr Turnbull will return the favour some time in the near future.