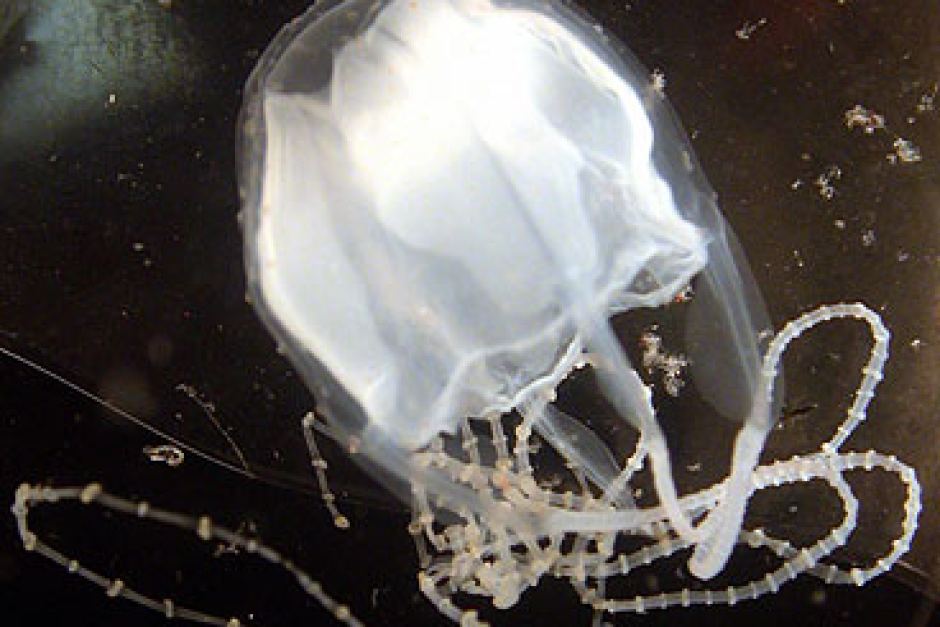 A marine researcher says the dangerous irukandji jellyfish will become common place on southern Queensland beaches within a decade.

Irukandji have been found in Western Australian, the Northern Territory and as far down as Fraser Island in Queensland.

James Cook University Associate Professor Jamie Seymour has researched venomous and dangerous animals for more than 20 years, and is currently based at the Australian Institute of Tropical Health and Medicine in Cairns.

He said as water temperatures rise, the stingers drift further south, and could become a staple of beaches as far south as the Sunshine Coast.

"We've known that irukandji have been down, certainly in the southern end of Fraser Island, for the better part of 10 to 12 years now," he said.

"We actually found them there originally, we made comment about them being down there and we were told, not so politely, that we didn't know what we were doing, and that we should stay out of the area.

"So we did and we then published a couple of years ago showing quite nicely that irukandji jellyfish over the last 50 years are slowly, but surely, moving south," Professor Seymour said.

Associate Professor Seymour said the animals were temperature dependent, and as oceans warm they were able to survive outside the tropics.

"Their southern distribution is dependent on how cold the water is," he said.

"As the water gets warmer it allows these animals to go further and further south.

"It's the opposite to what most people think for global warming ... where animals are liable die off because of increased temperatures — jellyfish work the other way," Professor Seymour said.

"As things start to warm up they do better, so all the tropical animals start moving down south and because they're so moveable they can actually get to these places in a very, very quick time."

He said the furthest south the jellyfish had been found was the southern end of Fraser Island, but that was likely to change.

"Certainly I have no doubt that in the next couple of years —five years, maybe ten years — they will be turning up on the Sunshine Coast," he said.

"Not I think because the numbers are increasing, but because there's more and more people in the water."

Craig Holden from Surf Lifesaving Queensland said if numbers of irukandji on southern beaches increased, it would require a change in beach management.

"It would force some major changes upon us, surf lifesaving wise as well.

"It would mean we have to introduce some new techniques to our patrolling groups who operate in the Wide Bay and the Sunshine Coast areas, because they're not usually having to deal with the irukandji jellyfish, they're not doing those jellyfish drags."

Treatment for a jellyfish sting

He said in future surf lifesavers would need new protocols and swimmers may need to wear stinger suits for protection — but for now the risk was quite low.

"I don't think there's any need to panic yet, but Jamie Seymour is certainly one of, if not the world's leading expert when it comes to jellyfish. He certainly knows what he's talking about in terms of the irukandji jellyfish and the box jellyfish," Mr Holden said.

"Whatever he's going to say, I think we need to be listening to.

"I hope for everyone's sake that what Jamie is saying is wrong, but he's such an expert in the field and if he thinks they're going to start to travel south over the coming years he's probably right.

"It's something we need to start thinking about."

Bundaberg Hospital Director of Emergency Medicine, Dr Terry George, said swimmers could avoid being stung by wearing stinger protective clothing or staying out of the water.

"A protective suit such as a wetsuit or lycra suit will protect the covered areas of the body, and significantly reduce your risk of being stung," he said.

"The effects of an encounter with a jellyfish can range from receiving a painful sting, right through to a potentially fatal sting, from a box jellyfish or one of the jellyfish causing irukandji syndrome.

According to Dr George irukandji syndrome can take up to 45 minutes to develop and cause nausea, anxiety, headache, waves of spasms in the back and stomach, dizziness and difficulty in breathing.

Dr George said all stings should be treated as potentially dangerous, and unless from a blue bottle, should be washed with vinegar.