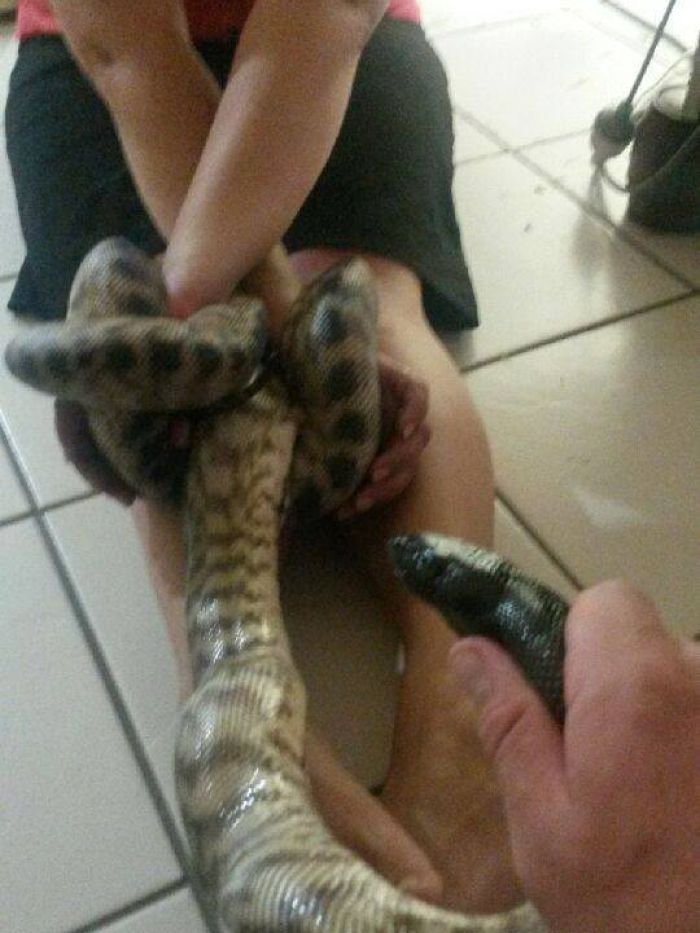 A Sunshine Coast woman was bitten and "handcuffed" by her pet python at 3am, prompting an unusual over-the-phone rescue bid by a local snake catcher and her housemate.

The woman was handling the black-headed python in her Sippy Downs home when it bit her on the thumb and constricted her hands together.

The woman's housemate was woken by her screams and contacted snake catcher Stuart McKenzie to assist.

After a few failed attempts at talking him through loosening the grip of the pet, the concerned housemate sent him a picture of the bind.

This was the first time Mr McKenzie had helped someone remove a python from themselves over the phone.

Photo: The incident was the first time Mr Mckenzie had helped someone remove a python from themselves over the phone. (Facebook: The Snake Catcher)

"After the snake had stopped biting her, it continued to constrict her hands together like you can see in the photo," he said in a Facebook post.

"The guy was very relaxed and kept her calm while he tried to uncoil the snake, but with no luck.

"I then told him that he would have to head-grab the python in order to be a bit more forceful with uncoiling it, I got him to send me a picture of the situation so that I could give them the appropriate advice.

"After about 20 mins on the phone they were finally able to get the snake off her hands safely and back into the enclosure.

"Thank goodness for that! At one stage I thought I was going to have to get in my car and drive over and give them a hand," he said.

The snake catcher said it was normal for a python to wrap around something that it bites.

"Most of the time they just bite and let go as a defensive thing but sometimes they will bite and hold on, that's when they coil up," he told the ABC.

He said black-headed pythons were normally found in North Queensland, not on the Sunshine Coast.

"If it was one of our native carpet pythons, I would have been more inclined to come out," he said.