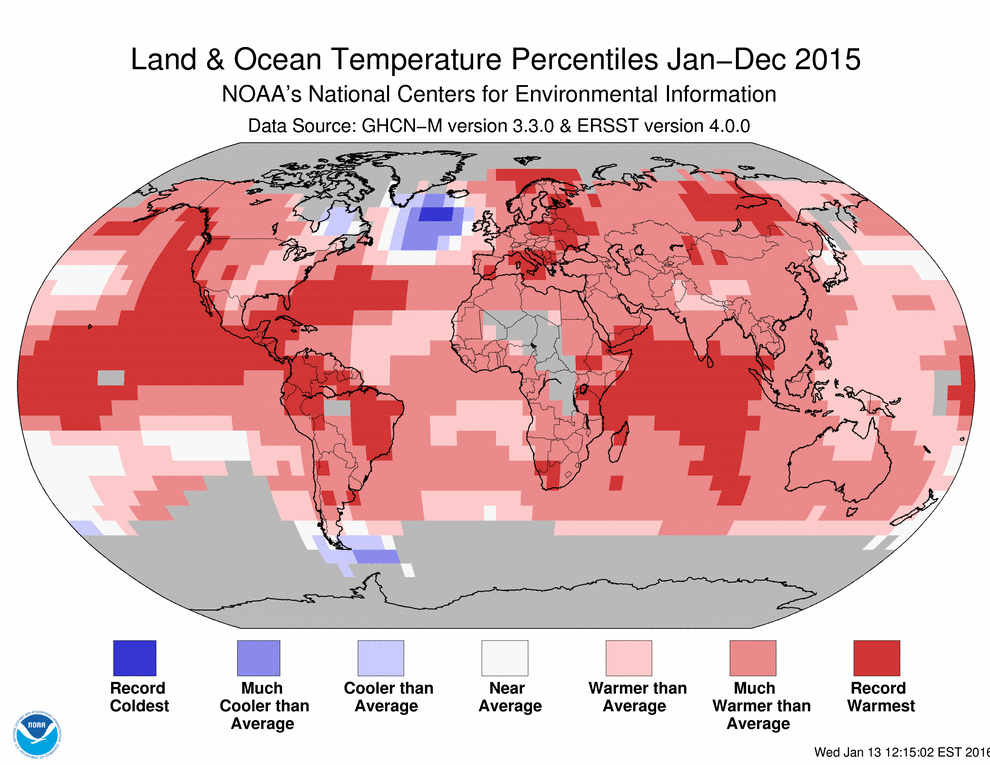 Its Official NASA-NOAA Global temperatures in 2015 by far hottest in modern times,

Global temperatures in 2015 were by far the hottest in modern times, according to new data from American science agencies.

Not only was 2015 the warmest worldwide since 1880, it shattered the previous record held in 2014 by the widest margin ever observed, a report by the National Oceanic and Atmospheric Administration (NOAA) said.

"During 2015, the average temperature across global land and ocean surfaces was 0.90 Celsius above the 20th century average," the NOAA report said.

"This was the highest among all years in the 1880 to 2015 record [and also] the largest margin by which the annual global temperature record has been broken."

The US space agency NASA, which monitors global climate using a fleet of satellites and weather stations, confirmed that last year broke records for heat in contemporary times.

NASA said that the temperature changes are largely driven by increased carbon dioxide and other human-made emissions into the atmosphere.

"Climate change is the challenge of our generation," NASA administrator Charles Bolden said.

"Today's announcement not only underscores how critical NASA's Earth observation program is, it is a key data point that should make policy makers stand up and take notice — now is the time to act on climate."

Last year marked the fourth time a global temperature record has been set this century.

Moreover, the latest finding adds to a steady rise in heat across land and sea surfaces that have seen records repeatedly broken over the years.

"Since 1997, which at the time was the warmest year on record, 16 of the subsequent 18 years have been warmer than that year," the NOAA report said.

Australia's coastal capitals would slip under the waves along with megacities across the world even if global warming can be limited to 2 degrees Celsius, scientists say.

The heat was felt worldwide, with unprecedented warmth covering much of Central America and the northern half of South America.

Regions of eastern and southern Africa experienced more blistering heat than ever, as did large parts of the north-eastern and equatorial Pacific boosted by the El Nino weather phenomenon.

Hot temperatures were observed in parts of northern, southern and eastern Europe as well as western Asia and a large section of east-central Siberia.

A separate group, Berkeley Earth — a US non-profit organisation that says it was founded by people who saw some merit in the claims of climate change sceptics — announced similar findings last week.

"For the first time in recorded history, the Earth's temperature is clearly more than 1.0 Celsius above the 1850-1900 average," it said.

NOAA's announcement comes against a backdrop of the recently completed Paris climate talks, at which the goal of capping global warming at 2 degrees Celsius above preindustrial levels was enshrined.