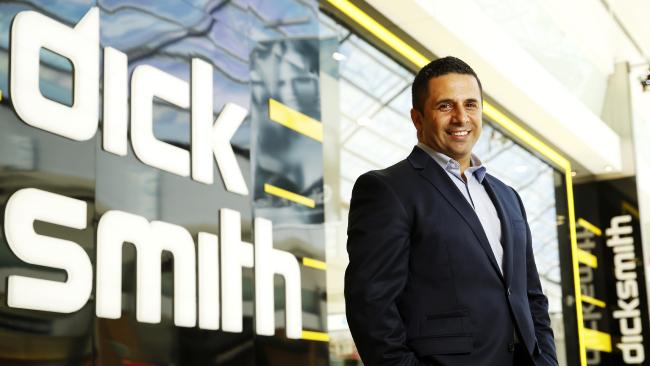 Thousands of Dick Smith customers could be left out of pocket as receivers say they will not honour gift cards or refund deposits for the failing electronics chain.

The retailer announced this morning the 393-store chain had tumbled into administration, putting more than 3300 jobs at risk.

Receivers Ferrier Hodgson said stores would remain open while options were considered for the business, and employees would continue to be paid.

But consumers, many of whom may have received gift cards for Christmas, face being left empty-handed.

“Due to the financial circumstances of the group, unfortunately, outstanding gift vouchers cannot be honoured and deposits cannot be refunded,” Ferrier Hodgson partner James Stewart said.

He said affected customers will become unsecured creditors of the group, casting a question mark over whether they will get their money back.

Mr Stewart said the search was on to find a party willing to buy the company.

“Dick Smith is one of the best known brands associated with consumer electronics in Australia and New Zealand.” Mr Stewart said,

“We are immediately calling for expressions of interest for a sale of the business as a going concern.”

Mr Stewart said that the New Zealand business was profitable and expected it would be attractive to potential buyers.

Dick Smith announced it had gone into voluntary receivership this morning, just a day after its shares were put in a trading halt.

The company said its sales and cash generation in December was below expectations, and it had been unable to secure alternative funding.

“While confident on the long-term viability of the company, the directors have been unsuccessful in obtaining the necessary support of its banking syndicate to see it through this period,” it said in a statement.

“Without this support, there is no option other than to appoint a voluntary administrator.”

The collapse into administration comes barely two years after the chain was floated on the stock market by its former private equity owners.

Dick Smith directors have appointed McGrathNicol as administrator, and will “explore all options” to allow the company to continue as a going concern.

It says the weak sales last month continued a trend from the past quarter.

Receiver Mr Stewart said it was too early to clearly identify the main causes of the company’s financial problems, but said the business had become cash constrained in recent times.

Shares in the group had plunged more than 80 per cent since August on the back of two profit warnings and weak sales in October and November.

Its shares have now been suspended from trading.

The chain was criticised by rivals in early December for launching a clearance sale, labelled “suicidal” by one competitor, with deep discounts of up to 80 per cent.

Dick Smith chief Nick Abboud announced in October that full-year net profit for the year to next June was expected to be as much as $8 million below a previous forecast of $45 million to $48 million.

One month later, the group shocked the market by saying it could not reaffirm the profit forecast issued just weeks earlier.

Mr Abboud also said then that the retailer would write $60 million off the value of inventory.

The sale was launched on the same day it was announced Dick Smith would be dropped from the ASX 200 index in the quarterly reshuffle.

“Dick Smith had million of dollars’ worth of inventory on fire sale, so the Christmas sales were already interrupted by that,” he said.

“What could have been a reasonable Christmas period has been impacted, and the question is how much that sale has also impacted JB Hi-Fi and Harvey Norman.”

The retailer is the latest company to disappoint after private equity owners turned it over to the public.

The retailer was floated on the Australian share market just over a year later with a value of $520 million, raising questions about Woolworths’ decision to sell it so cheaply.

But Dick Smith has floundered in the highly competitive sector, with the plunging share price leaving investors deeply rattled.

Yesterday, investors in rival consumer electronic stocks shrugged off the potential bad news coming out of Dick Smith, with JB Hi-Fi shares closing up 3 per cent at $20.10.