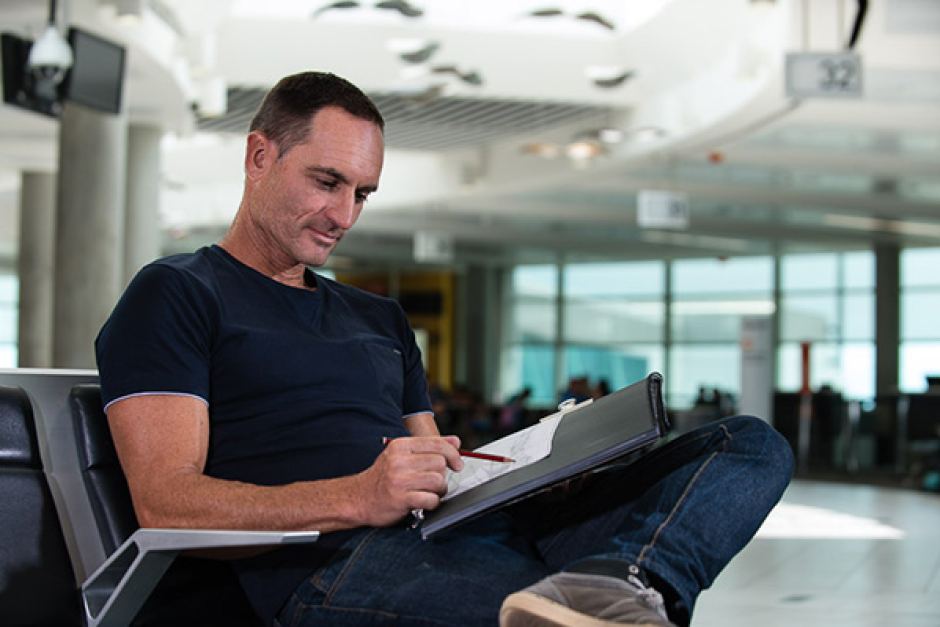 Robert Brownhall has been chosen by the Brisbane Airport Corporation (BAC) as its first artist-in-residence.

His appointment is the first of its kind in Australia and he will be tasked with capturing behind-the-scenes aspects of the airport.

Airports have great views and flat landscape, there's nothing like the airport ... it's a different landscape.

The Queensland-based artist has already spent many days sketching scenes from a seat in the waiting area.

"There's so much to draw just from the waiting chairs, I'm just sitting amongst the passengers all the time," Mr Brownhall told ABC Local Radio's David Iliffe.

"While sitting there drawing I'm using my eyes and hearing everything that is said around me — people greeting each other and their hellos and goodbyes."

Mr Brownhall said the airport environment allowed him to play with distance and space.

"Airports have great views and flat landscape," he said.

"There's nothing like the airport, it's a different landscape.

"I love the shapes of planes too as they cast great shadows."

It all starts with a sketch

Long, dark runways are the hardest things for Mr Brownhall to recreate in his artwork.

"The tarmac is cement and it is a challenge to make cement look good, but I'm doing it," he said.

I have a drawing of the baggage pickup area from above with children running amok, the chaos and bags tipping over.

"I started drawing scenes without people, and I have several scenes like that, but that would be lie as the place is crowded.

"The human element is big," he added of his sketches to date.

Mr Brownhall will spend time sketching at both the domestic and international terminals.

"I make a drawing first and then work from the drawing to bring the painting to life," he said.

"I have a drawing of the baggage pick-up area from above with children running amok, the chaos and bags tipping over."

Mr Brownhall said his style had hardly changed since he started drawing as a child.

"I drew realistically then and I haven't really changed that much," he said.

"I think I will end up with many, many more drawings than I need for this project so I will pin them on the wall and keep painting for years to come."

BAC and Mr Brownhall aim to hold an exhibition of 15 artworks later this year after his six-month residence.

One piece will then become a permanent addition to the BAC's public art collection.