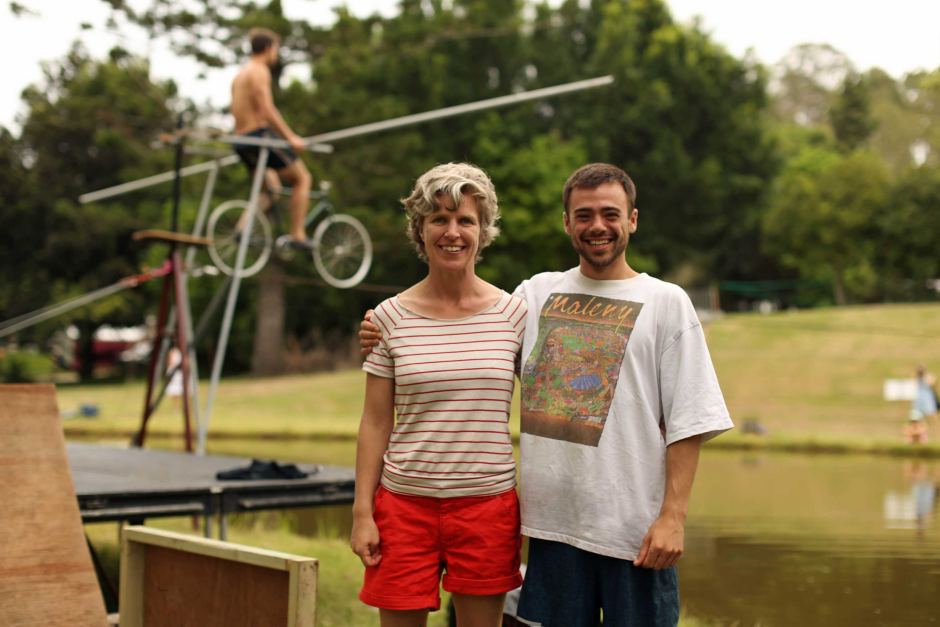 Woodford Folk Festival volunteers and workers: the real party is in the preparation

If you asked any of the Woodfood Folk Festival's volunteers and workers what their favourite part of the event was, you would get an overwhelming response.

"Before the festival is the real party," they would say.

Let's meet some of the people at the party before the party.

Woodford Folk Festival has had circus performers for more than 15 years, usually in a large tent, but this year they will be spread out around the festival.

"[The circus] is popping up over the pond, in the music venues, in the street, it's going to be everywhere," circus director Chelsea McGuffin said.

The show Perched is a tightwire and slackwire performance above water, which imagines what cities would be like if sunken in water.

Slackroper Skip Walker-Milne said the performance garnered a few laughs when acrobats fell in the water.

"I reckon some of us will be getting wet whether we like it or not. I'm sure there'll be a bit of entertainment then," he said.

A world of volunteers

Volunteer Eriko Noritake is just one of the hundreds of international volunteers helping build the Woodford Folk Festival.

She is painting the walls and chairs of the Little Tokyo bar with "either a dragon or Japanese pattern".

"I work as a graphic designer in Japan," she said. "It's the first time I've been to this festival."

Ms Noritake is experiencing camping for the first time, but has enjoyed living in a tent for the past three weeks.

"It has good air here and very nice music," she said.

Jean-Pierre Jacquet and his six volunteers are preparing 40 toilet blocks for the festival.

"When you arrive some of them are pretty gross and we have to high pressure clean them all," he said.

"It's diverse and quite relaxing. It is not terrible."

Mr Jacquet has been cleaning the toilets for 15 years and has no plan to stop.

"If I stay home I'll be wondering what's happening at the festival the whole time," he said.

Mr Jacquet and the other volunteers share a "fantastic atmosphere" leading up to the festival.

"We do hard work but we are relaxed and happy," he said.

Deputy general manager Kim Pengelly said although her main job was business-related, she still got her hands dirty building installations at the festival.

"A couple of years ago we worked out that designing beautiful bars were more attractive to patrons," she said.

"The turnover in that bar just doubled."

This year, Ms Pengelly spent weeks dyeing thousands of large paper flowers that will make up the ceiling of a new bar.

Ananda Mcoscar has been selling "pedal power juice" at the festival since it began and now works the festival with his son Kyle.

The Mcoscars spend two weeks setting up "because before it starts it's more fun".

"We've got six workers from different countries and they create an amazing energy," Ananda said. "It's beautiful."

They have both done their time on the bicycle that powers the juicer.

"I'm semi-retired. I leave that to the young crew," Ananda said.

"I've done every festival on the east coast but this is the one I come back to and love."

More than 1500 people signed up for the imaginary world of The Game at Woodford last year and more are expected to play this year.

Creator Tim Monley said the role-playing game was "like being inside a computer game but real life".

Players are sent on quests where they visit dozens of actors who are manning a handful of fantasy sets like the sunken pirate ship, the 1920s train or the trothedral (a cathedral where a troll lives).

"My favourite quest is asking people to get something that resembles a lemon, but is not a lemon," Mr Monley said.

"You can eventually give other people quests and you can begin an adventure.

"But if you die you go to disco death where you must dance to disco to get out."

South American Julius Montis has been volunteering in the Woodford kitchen for eight years.

"I do chopping or washing or serving or whatever they tell us to do," he said.

"I'm not qualified for cooking though, unless they want a South American barbecue."

Mr Montis said the kitchen catered for all types, including vegetarians, vegans and people with allergies.

"We had one guy a few years ago who couldn't eat one single vegetable. I think he could eat meat," he said.

"We had another one who couldn't eat anything but potatoes for breakfast."

Media intern Anika McMahon loves working at the Woodford Folk Festival because "people are so enthusiastic about their work".

"This is the first time I've been at the festival as an adult and I really want to see the music and the talks," she said.

"I really like seeing how the organisation brings the festival to life."

Ms McMahon chaperones media around the site, writes press releases and looks after social media, and has been on site for four weeks already.

"I'm not homesick, I really love it," she said.

Technical production manager Bernd Neumann has a handful of jobs. Producing the fire event and building stages are just a few of them.

"It is not stressful but it is very busy," he said. "I've just paced out a rough stage for the suppliers."

Mr Neumann said he hoped no one ever thought too much about the work that went into building the stages and sets.

"If they start thinking about what's involved in setting it up, then they are distracted from the beautiful festival and exciting program," he said.

"Bamboo's pretty versatile. It grows quickly, it's light and strong and a great building material," he said.

Mr Dodd said the 10-metre high pineapple behind him took about two weeks to build.

"It's exciting but it can be pretty laborious when it's hot," he said.

"But you meet lots of great people, and the food's pretty good."