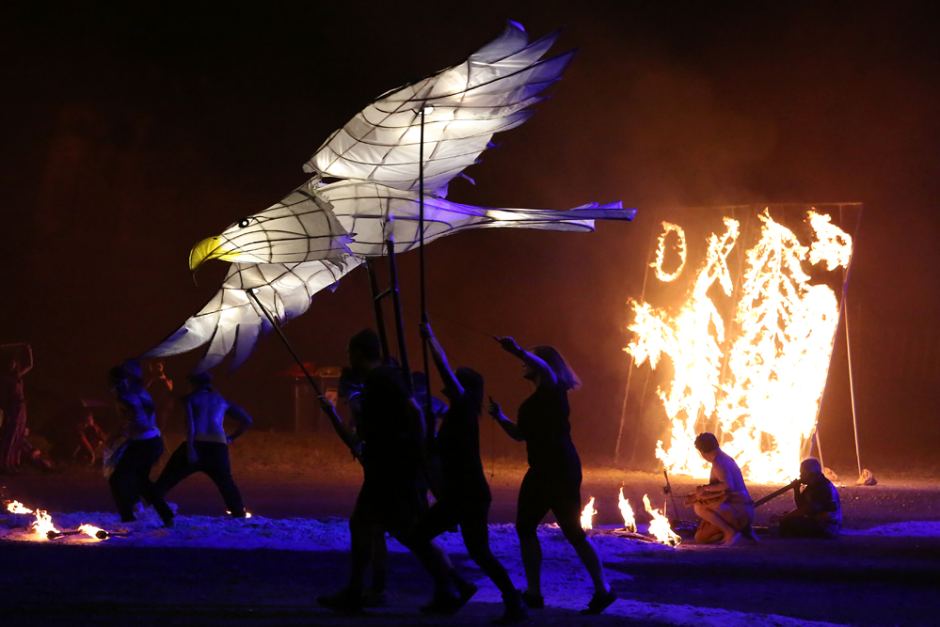 As the sun set behind the grounds of Woodfordia last night, thousands of people from all walks of life came together in celebration of the Woodford Folk Festival's 30-year anniversary.

The Welcoming Ceremony opened with a performance by acclaimed singer-songwriter Katie Noonan, who was commissioned by the festival to write tribute song United in Sound, evoking the history and spirit of the iconic festival.

Along with her six-piece band, she was joined on stage by the Sunshine Coast Woodford Welcome Orchestra, a 40-person ensemble made up of musicians from the Sunshine Coast, brought together by composer Andrew Veivers.

Photo: More than 2,000 performers are scheduled to appear over the six days and six nights of the festival. (ABC: Lisa Clarke)

Wet weather did not deter fans, with almost 13,000 people packing onto the hill at Woodfordia as festival director and founder Bill Hauritz officially opened the six-day event.

Photo: With thousands turning out to enjoy the acts, many have had to brave the elements. A thunderstorm hit south-east Queensland last night, with some areas receiving 44 millimetres in half an hour. (ABC: Lisa Clarke)

An estimated 14 millimetres of rain fell on the festival grounds over a 16-hour period during the day and into the evening, leaving attendees a little wet but not worse for wear.

Braving the weather with brollies and gumboots, the crowd watched on as Uncle Noel Blair performed the Welcome to Country before a spectacular show from a variety of performers.

Woodford Folk Festival general manager Amanda Jackes did not think the weather affected the overall success of the ceremony, and said she could not be more thrilled about the forecast for the remainder of the week.

"The site just looks fantastic today. You wouldn't have expected that we had so much rain.

"We were just delighted with Katie Noonan's 30th anniversary song."

Ms Jackes said she was looking forward to what would unfold over the next few days of the festival.

Over her 29 years of involvement, she said it was still the people who made her the proudest.

"It's the community that makes Woodford. They're the heart and soul of what Woodford is," she said.