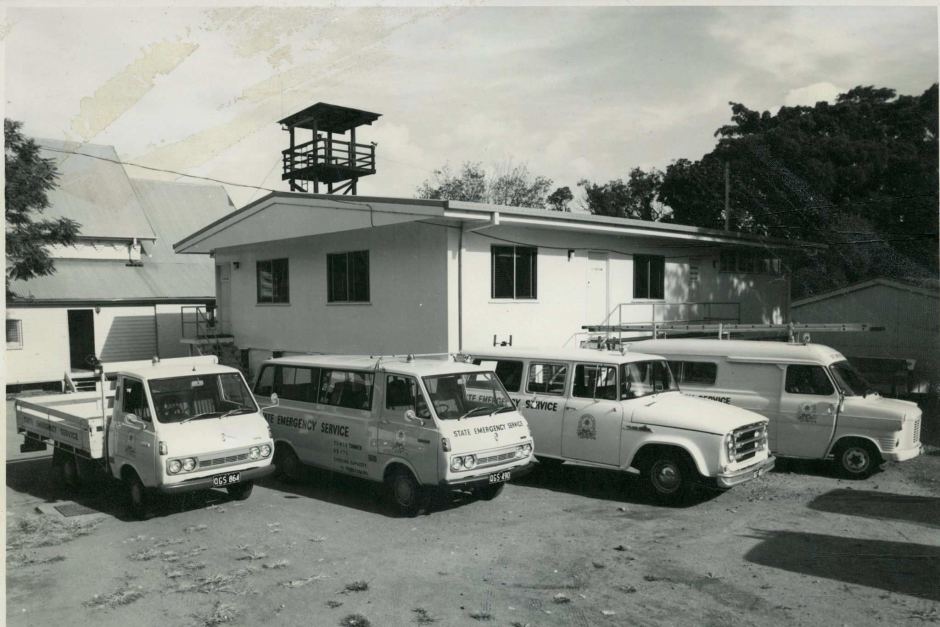 Only a small group of people in 2015 can claim to have been with the State Emergency Service (SES) throughout its entire existence.

Today 5,900 active volunteers in 316 groups celebrate 40 years since the service first came into existence in the Sunshine State.

Of those members, there are 20 that have been involved from the beginning.

These are the stories of two of those members.

'You don't know what it's like until you're actually standing there'

When Tony Daniel first signed up to the SES his group had to hold their meetings in a real estate office after hours and fundraise to buy their own vehicles.

Today, they have their own training and meeting facilities, and their vehicles are now provided to them.

To him, it is the biggest change to occur with the SES over his four decades there.

"I started off in the Brisbane unit and initially we had to buy our own vehicles so we fundraised and ended up with vehicles that weren't really suitable," the 65-year-old said.

"Over time council provided with us with more recent and more suitable vehicles."

Mr Daniel got involved following the 1974 flood of Brisbane when he was in the Army Reserve.

"Then about a week after the flood, when the waters went down, there was an item on the radio that said the focus of Civil Defence was going to be changing from nuclear warfare to natural disasters," he said.

"That appealed to my desire to help people."

Mr Daniel said he knew from the beginning he would be involved with SES for the long haul.

"For me, it's the satisfaction of being able to assist people affected by severe weather events or suffering the trauma of missing persons — either the missing person or their relatives — as well as working with like-minded people that has kept me with the SES," he said.

One of his most memorable incidents from his time with the SES comes from a hail storm that tore through Brighton on Brisbane's north 35 years ago.

"As I've often said to various people you don't know what it's like until you're actually standing there," he said.

'You make a lot of friends here'

No matter where you go within the SES, you are bound to end up mingling with good bunch of like-minded people.

That is the view of veteran volunteer Mark Brake, another SES member celebrating 40 years with the group this year.

The 61-year-old, who is currently serving as senior field operation member with the Brisbane City SES Unit, Eastern SES Group, finds the camaraderie the best part of the gig.

"You make a lot of friends here. You go to activations, callouts ... you mix with people. I'll mix with people from Ipswich, Redland, Moreton Bay — you get to know them," he said.

"In your training you go to courses and you'll meet people from all over the place — you keep bumping into them.

"One gentleman who has also been involved for 40 years is from Logan. I met him 15 years ago at a course ... you keep bumping into him at big activations, training courses. You'll find them at different things."

In Mr Brake's time with the SES he has been called upon following various Brisbane storms, including the 2011 floods.

He was also involved in the clean up of Cyclone Yasi.

"We stayed in Cairns, bussed to Tully each day. The first day we were there we were pulling fridges out of the scrub ... by that stage it'd been about a fortnight since the cyclone ... all the food — you could imagine in Tully what the temperature was like, it was going off," he said.

One of Mr Brake's current roles sees him assisting with training.

"I know in our group — we've just had an intake finish and people will come along and say they want to join the fire brigade but the fire brigade tell them that the SES is something they should do first off," he said.

"Other people have other reasons. You look at it as a form of community service ... it gives you something to put into the community, other people look at it being able to do things to better themselves.

"I've heard different members when they're at work and say 'my boss wants me do to XYZ' and you go 'I've basically done that in SES, so I know how to do this or present myself'. You learn a lot of life skills."

For Mr Brake, the biggest change for him over the years has been the introduction of workplace health and safety.

"When I first joined if you wanted to do roof repair you put up ladder up, climb up and do what you want ... nowadays you need your ropes, harnesses, they need to be tested so they come into industry standards. There's a lot more structure."

The training has also been standardised.

"Years gone by if you went to another group in Queensland they'd go 'we don't recognise that course' and you'd start from scratch," he said.

"Now it doesn't matter where you go in Queensland whatever course it is ... it is the standard course, testing is standard so you come to certain qualifications."