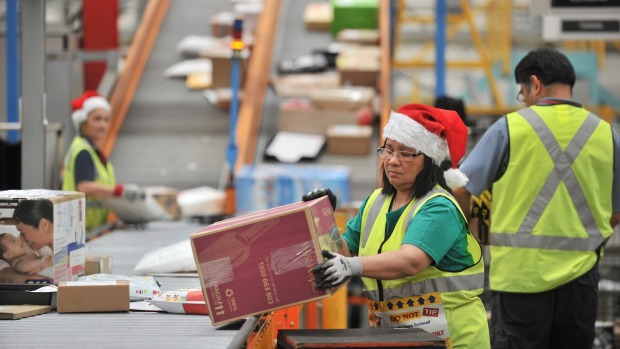 Small business are you ready ! Bracing for the $1 Christmas stamp price hike

If you run a small business, you're no doubt bracing for a 43 per cent price hike on Australia's basic postal rate, set to be introduced right after Christmas.

The Australian Competition and Consumer Commission has approved Australia Post's application to introduce a price hike to $1 for postage stamps, up from the current rate of 70c. Large envelopes will also rise in price from $1.40 to $2.

This is a massive additional cost for businesses to factor in given they're often posting bulk.

While Australia Post's parcel trade grows in line with the surge in online shopping, the company is responding to the very real threat to its core letters business in this new digital landscape.
Chief executive of the Australian Direct Marketing Association, Jodie Sangster, says the price hike will drive more businesses away from Australia Post.

The price hike will hit hardest with small businesses who rely on the national postal service as a core form of marketing communication with their customers.

Personalised jewellery business owner Sarah Saputra posts about 700 orders of customised jewellery a week, turning over $1.3 million. During the Christmas period, orders via her site, Belle Fever rise to about 1000 a week.
James Chin-Moody says Sendle is prohibited by legislation from offering an alternative to Australia Post in the letters space.

"It's not just the extra cost of posting an item by letter post that's an issue for us," Suputra explains.

"Sometimes, our jewellery gets lost in the mail so we have to remake the order and send it out again, which is a huge added expense for us. Or, Australia Post returns the mail to us because it hasn't been collected from the post office quickly enough, which costs us double to have to post it back out again," Saputra says.

Given the cost of posting items, sometimes twice, she is considering a price rise of her own next year to cover the costs.
Affecting the way people do business

Chief executive of entrepreneur program The Butterfly Experience Deborah Morandin says the postage stamp price hike has been a hot topic of conversation in her 5000-strong Facebook group.

"There's lots of concern about the cost of doing business next year. One man who runs an eBay shop posted pictures of an item that Australia Post had returned to him because the mail was 100g over the limit for him to pay the 30c extra. Once upon a time, Australia Post didn't worry that much, but those days are gone, and it's affecting the way people do business."
Speeding up the switch to digital

The Association for Data-Driven Marketing and Advertising (ADMA) was among a number of organisations that asked for the price hike to be staggered, but the request was rejected.

Chief executive Jodie Sangster describes the price hike as ill-thought through, saying there wasn't a need to implement this increase at such speed.

"This is a disappointing outcome for companies who have already established their marketing budgets for 2016 to have to contend with.

"While we understand that there needs to be an increase to make Australia Post remain viable, this is a massive additional cost for businesses to factor in given they're often posting bulk.

"Also, bear in mind also that businesses will be forced to reduce their volumes, so the increase won't actually result in the increased revenue that Australia Post is hoping for. In fact, the price hike will speed up the switch to digital that many businesses are in the process of implementing. It will also raise questions around whether or not mail should remain part of their marketing channel at all."
No alternative

And while businesses scramble for an alternative, a comparative national postal service appears to be off the cards given that legislation prevents it.

Alternative postal delivery startup Sendle, which has a turnover in the millions, has investigated a letter service.

Chief executive and co-founder James Chin-Moody says: "Unfortunately Australia Post has a monopoly on letter post for letters weighing below 250 grams under the Australian Postal Corporation Act 1989. If a carrier wants to compete on letter post, by law they must charge a minimum of four times more than Australia Post does for the same service, which means that customers aren't left with a lot of choice."

However, Sendle will launch a smaller parcel service (under 500 grams) early next year. Pricing has not yet been announced.

"This will provide a game-changing alternative for businesses that need to send documents or smaller parcels," Chin-Moody says.

Australia Post says the price hike will enable it to recoup the cost of providing letter services so it can maintain the nation-wide 4000-strong Post Office network and keep posties delivering to about 11.4 million points across the country.

Australia Post communications manager Michelle Skehan​ says the reason the monopoly is in place is to allow it to cover the cost of the Community Service Obligation (on-time delivery and delivery to 98 per cent of delivery points five days a week. She also said the basic postage rate has increased only four times in the past 23 years.

Domestic letter volumes are expected to continue to decline by a further 10.8 per cent per year to 2017/18, Australia Post predicts.