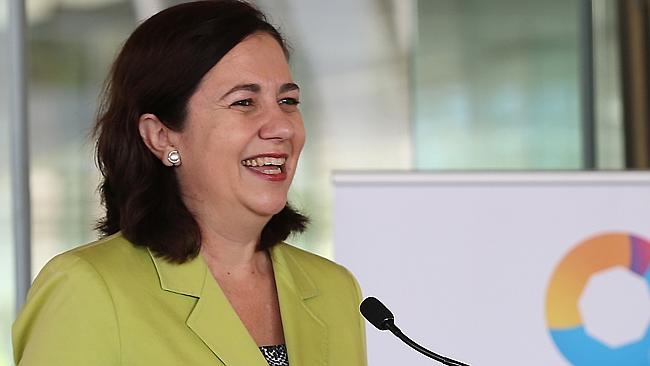 Ahead of finding out their new jobs, Annastacia Palaszczuk's Queensland ministers said they were "happy to serve however the Premier sees fit".

Or at least the two who came through the front door said so.

Continuing a line which Ms Palaszczuk's 13 ministers had been trotting out since the cabinet review deadline inched closer, Shannon Fentiman and Leeanne Enoch said they would leave their fates in the Premier's hands.

"...I had a meeting last Thursday night, she thought I had been doing a good job, she will have some news for us soon."

A change to Ms Enoch's portfolio has all but been set in stone, with the Premier flagging a stand-alone Innovation Minister to carry her Advance Queensland policy forward.
Leeanne Enoch: also "happy to serve".

"I've been really fortunate, I have been serving (on) two really amazing portfolios, so really it is up to the Premier, I will be happy to serve in whichever capacity," Ms Enoch said.

"It is too hard to choose - they are different."

Ms Palaszczuk has hinted she would be expanding her cabinet by at least two ministers, but could pick another four from the backbench to move forward.

Jo-Ann Miller's resignation on Friday freed up one of those spots, with former Bligh Minister Stirling Hinchliffe considered a firm bet for one position.

Mick de Brenni, currently serving as Whip, is also considered a strong chance for a promotion.

Di Farmer and Grace Grace are other names which have been bandied about, along with Linus Power.

Ms Palaszczuk is due to announce Queensland's new ministry on Monday afternoon.