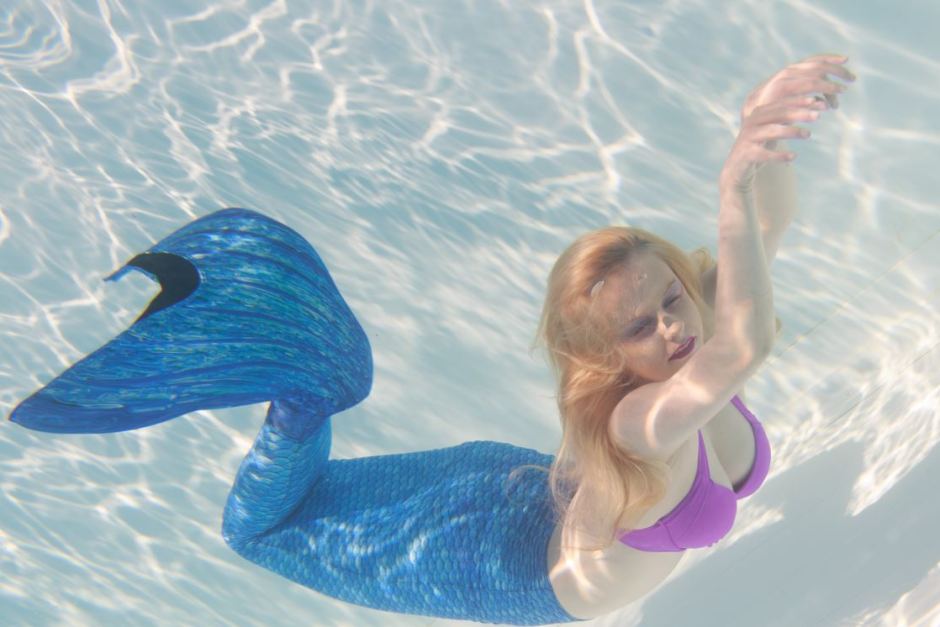 Australian product safety authorities have warned the lure of gliding through the water like a mermaid could become a deadly Christmas gift for young children.

The toy essentially binds the legs of a swimmer and acts as a flipper so the child can "swim like a fish".

The product — which comes in two types, mono fin and the full mermaid suit — typically comes with an age recommendation of six and up, but Consumer Protection has warned the toy could be an unsafe Christmas gift in the hands of young or incapable swimmers.

Acting commissioner David Hillyard urged parents to think through their gifts this festival season, and look past popular fads when ticking off their shopping list.

"Our worry is that in the excitement of Christmas, a child who may be too young or incapable of using a mermaid tail might end up trying one," he said.

"It means that we adults need to constantly supervise young children in, and around, water."

While the mermaid tail safety warning was not serious enough to prompt a recall, the alert was prompted by a viral video from the US showing a mother rescuing her daughter from a backyard pool after she became stuck upside down while wearing her mermaid suit.

Consumer Protection WA retail and services acting manager Paul Maher said there were no reported cases of mermaid tail drownings in Australia, but education and adult supervision were key to avoiding any tragedies.

He said the Australian Competition and Consumer Commission (ACCC) would assess the mermaid tails for compliance after the warning was issued.

"Children should be at least six, be a good swimmer, have adult supervision and perhaps they will need a lesson first on how to use the tail," Mr Maher said.

"Lots of kids want this product this year for Christmas, we want parents to know the risks.

"It's a time of year where parents should be extra vigilant... and educate their whole family.

"Parents should be conscious of what they are giving their older children because their younger children might want to get their hands on whatever it is to."

Flights a no-go for hoverboards after recall

Hoverboards are the latest craze expected to sit high on Christmas wishlists, but after an ACCC investigation and retailer recall, Qantas is the latest company to take a stand against the popular product.

Qantas is banning the motorised skateboards amid fears they pose a fire risk.

Big W issued a recall earlier this week of the "Moonwalker 2" wheel scooter by Hunter Sports.

The ACCC said the cord set and the battery charger did not comply with Australian standards. The body also said there was a potential for electric shock.

Some eBay sellers have also recalled their self-balancing boards.

The move follows similar bans slapped on the lithium ion-powered boards by several airlines including Emirates and American Airlines following reports they could explode unexpectedly.

Qantas said it would not allow the boards in carry-on or checked baggage on any flight.

There has been worldwide concern over the hoverboards catching fire.

Hoverboards are powered by in-built batteries which can overheat and catch fire if they are overcharged.

Mr Maher said the Big W hoverboards were sold exclusively at that major retailer and should not be accessible at other stores.

He said parents should look for the Australian Regulatory Compliance symbol, which appears as a tick surrounded by a triangle, which indicates the supplier has taken steps to comply with Australian Electrical requirements.

The public can keep track of recalled products at the ACCC Product Safety Recall website.

In a Consumer Protection WA pre-Christmas blitz, 105 items were tested for button battery dangers, and of those, 20 items failed to meet safety standards.

The body is working with the companies after the products did not meet the "drop test", where items are tested for every day wear and tear expected from a child to see if small items of batteries fall loose.

"Leading up to Christmas we issued a warning about button batteries, not just battery operated toys, but as everyone knows, if it flashes and makes noise, it will be attractive to children so that could be common things around the house," Mr Maher said.

The death of Queensland four-year-old Summer Steer in 2013 prompted an Australia-wide campaign to reduce the risk of button batteries to children.

Coroner John Hutton recommended manufacturer step up with safer packaging and health warnings after Summer became the first child to die in Australia from swallowing a button battery.

The batteries can get stuck in a child's throat and burn through the oesophagus in as little as two hours. Repair can require feeding and breathing tubes and multiple surgeries.