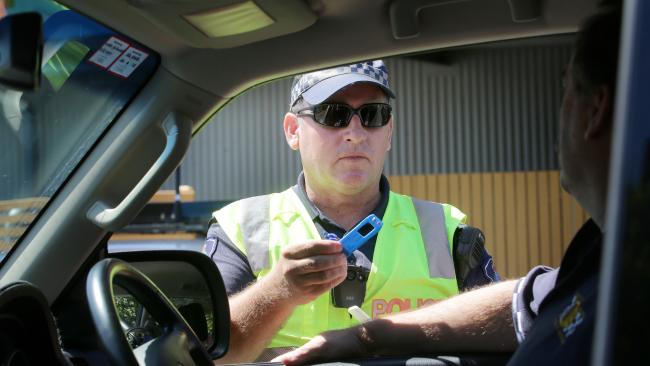 Police can now do roadside drug tests, anywhere and any time as a Queensland professor defends the accuracy of the tests.

A new machine, capable of testing saliva for drugs such as cannabis, amphetamines and cocaine has been sent out to the North Lakes Traffic Branch and Senior Sergeant Bryan Eaton said it was a “game-changer” for police.

The machine, which is called a Drager Drug Test 5000, will combine with increased officer training in the Pine Rivers region, north of Brisbane

The rollout is part of a Queensland-wide move which police say will mean more drug tests, in more locations.

“Prior to the statewide rollout in March 2015, 51 trained officers were located centrally in Brisbane,” a police spokesman said.

“These officers had facilities to travel the state with 13 specially built drug testing vehicles.”

Today there are 67 drug testing machines located in stations right across Queensland and 318 officers have been trained in how to use them — with another round training scheduled for early 2016.

For police in Pine Rivers this represents a solid increase in their capabilities.

“Twelve months ago we wouldn’t have been talking about this, but now we’ve got four officers trained in doing roadside drug tests,” Sen-Sgt Eaton said.

“The indication is there are a significant number of people out there who do take drugs … before they drive.”

Sen-Sgt Eaton’s statement is backed by the results of a recent traffic operation at the Pine River Bridge, on the Bruce Hwy, on November 28.

There, police nabbed more drug drivers than drunk drivers, with four people being charged with drink driving and nine with drug driving.

Queensland law states it is an offence to drive with an illicit substance in your blood, or saliva. The maximum sentence is three months’ jail.

“If you’re found guilty of an offence, you will also lose your licence,” Sen-Sgt Eaton said.

The news comes amid growing concerns traffic operations now catch more drivers with drugs in their systems than drivers under the influence of alcohol.

When it was initially rolled out, roadside drug testing technology had faced controversy.

Tests in some Australian states returned false positive results and charges against the drivers had to be dropped.

However, Professor Jeremy Davey from the CARRS-Q Centre for Accident Research and Safety said claims of roadside drug tests nabbing people who are not under the influence were “urban myths”.

He said the tests would pick up drivers who had smoked cannabis no later than about 12 hours after they used the drug — unless they were heavy, frequent users in which case it would stay in their saliva for about 48 hours.

For amphetamines, he said the time period was closer to two days and added this was similar to the period of intoxication.

“It’s extremely unlikely that these tests will get it wrong,” he said.