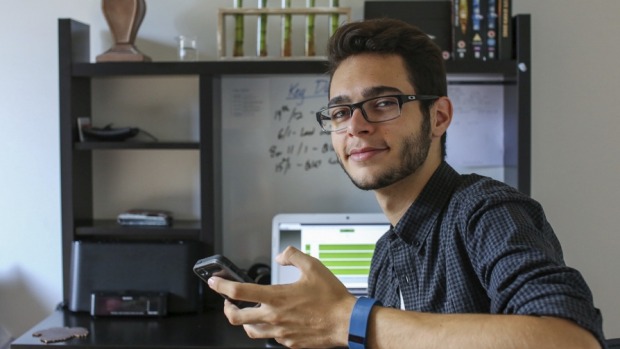 When Redcliffe State High School's Chris Nelson discovered he had attained a perfect OP1 score early Saturday morning, his first response was most certainly reflective of his generation.

"Mum was a little mad because I made a Facebook post first and she came running in to my room and said, 'why didn't you tell us first?' " he laughed.
Redcliffe State High School student Chris Nelson, with parents Kerry and Ian at home in Brendale, posted his perfect score to his Facebook site before telling his parents.

"But they were over the moon."

Like all of Queensland's nervous high school graduates, the 18-year-old aspiring medical engineer thought the scores went live at 9am Wednesday.

But when he woke at 7am, he found a text message from a friend that said the scores had gone live at midnight.

Chris immediately logged on to the Queensland Curriculum and Assessment Authority website via his phone and found he had achieved a perfect score.

He was one of just 731 students across the state to achieve the highest possible OP score.

"I was just in shock, it was just really exciting then I just felt really overwhelmed that the last year has been worth it to get the end result."

While naturally with five years ahead of him he is still a little undecided as to his ultimate career path, at present, he has his eye on the medical engineering field.

For now, the pressure is off for a little while.

"I thought I was going to be pretty calm about it but the last couple of days I have silently stressed about this moment, just the stress of not knowing," he said.

The next stress test for the state's 2015 high school graduates is January 14, when first round university offers come out.

Queensland Education Minister Kate Jones said a record 92 per cent of the state's 51,022 Year 12 students this year attained their Queensland Certificate of Education.

But while there are many happy graduates in Queensland on Saturday, Ms Jones urged students who did not achieve the results they had hoped for not to be disheartened.

"I encourage anyone who is disappointed with their results to be aware they have many options," she said.

"They might work towards upgrading their qualifications or explore alternative ways of securing a university place or accessing training programs."