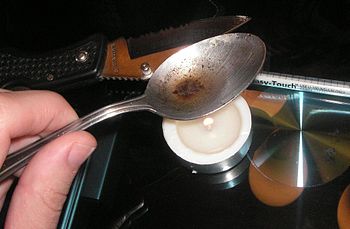 When Michael was 19 and struggling to cope with the sudden death of his sister, he tried everything.

His life had unravelled and he couldn’t cop the pain and guilt, so he turned to drugs to help sedate him. Alcohol, cannabis, speed, even ice, but nothing was strong enough. It wasn’t until he took the leap to ingest what was, as it is for so many, the last drug he would try — heroin.

“The power it had over me was incredible,” the 37-year-old tells news.com.au. “The internal dialogue I had running, the anxiety and the pain, it stopped and I felt a sense of peace and freedom and calm, at least that’s what it was like in the early days. I was very comfortable in my own skin. That changed.”

It took only a week for Michael to develop a full-blown addiction to the drug and he was willing to do whatever was necessary to get his hands on more of it so that he could get back that feeling of the first hit.

Within months Michael had turned to crime eventually leading to two stints in prison. His support networks fell apart as he sacrificed relationships for heroin, and he became a shell of the man he once was.

“Heroin left me emotionally bankrupt. I was in very, very poor health but I didn’t have the power to give it up because I kept chasing the feeling. It’s like a mountain with no top. You’re constantly climbing but you never get there,” he says.

Michael says he’s one of the lucky ones. With the help of an intensive rehabilitation program, he is no longer a slave to his addiction, but the drug still worries him.

Heroin is coming back in a big way, and Michael says it’s a “huge concern”.

One of NSW’s biggest rehabilitation services, odyssey House, has seen a staggering increase in admissions of heroin addicts in the past year.

In the 2014-15 financial year, the number of heroin addicts to be admitted to the Sydney clinic went up by 165 per cent to account for 29 per cent, almost a third, of residential patients.

Meanwhile, methamphetamine or ice users still account for the highest proportion of patients admitted to the clinic (32 per cent), and the drug’s prevalence has been recognised as a national crisis.

But the disaster drug the Howard Government took credit for cracking down on with its “tough on drugs” campaign is making a quiet and concerning comeback that could force authorities to reconsider their priorities in fighting drugs.

Australia saw heroin do its worst in the late 1990s. Discarded needles were a common sight on city streets and horror stories of crime and violence perpetrated by desperate users were news bulletin staples. Blood borne diseases were spreading with injections and along with overdoses, were claiming users’ lives.

Australian Drug Foundation policy director Geoff Munro says the explosion in odyssey House’s admissions of heroin addicts is indicative of a wider trend, and in the next few years Australia could take a backwards step to those terrifying times.

“This is in line from what all agencies are telling us. It’s been reported there’s an increase in heroin arriving in Australia in the last couple of years and it’s predicted that’s going to rise,” he tells news.com.au.

“There was a huge problem in the late 1990s and after heroin peaked in about 1998-99 there was a huge reduction in the supply of heroin, the so-called heroin drought, so people who were using it to cope with their problems switched to other drugs.”

He said rehab admissions were a good indicator of overall drug use, because they “flag the drugs that people are using who are getting into trouble with drugs”.

Mr Munro says the rise of ice was partially borne out of heroin’s diminished supply, and fickle drug users would just as soon switch back.

“The present cycle of crystal meth will fade away in the future but something else will replace it among people who, for whatever reason, want to use very powerful substances,” he said.

“It’s a marketable commodity like any other, it’s largely based on supply and when there’s another product on offer it may well take over.”

The influx of opioids and its take-up in Australia can be traced back to the Middle East.

The World Drug Report, published annual by the United Nations Office on Drugs and Crime, warns that opium cultivation is reaching historic levels in Myanmar and particularly Afghanistan. The latter country accounts for 85 per cent of global production and opium poppy eradication efforts have reduced significantly.

The withdrawal of US troops in Afghanistan has seen Taliban force pressure on local farmers to revert back to pre-2000 levels of opium production, rather than the wheat and corn crops they were encouraged to grow.

While public focus has been on treating ice, he says the evidence around an increase in heroin use is a reminder there’s more than one drug problem.

“What the public needs to understand is that drug markets are like any other markets. When you have a product that you can promote that’s cheaper, that’s pure, that’s better quality, then whatever the predominant drug may be, you will probably get people to switch over,” he said.

“I think the message is that we have to always be conscious and, white methamphetamine is certainly the predominant drug that is the issue at the present time, it’s not necessarily going to stay that way.”

While its return is shocking and of grave concern to those working in rehabilitation and other drug services fields, heroin’s resurgence could have a surprising upside.

Rehabilitation clinics have struggled to treat ice users with few known methods to wean patients off the incredibly addictive drug. In handling the ice crisis, the government has even borrowed lines and strategies from the late-90s drug crackdown.

But when it comes to treating heroin, the research is miles ahead and treatments have been tried and tested.

Treatments like methadone and naltrexone — which has since been used with some success to treat ice addicts — are ready tools for the well-practised addiction services community.

While there’s no easy fix to any drug addiction, heroin is at least a little easier to manage.

Having come out the other end of his 18-year battle with drug addiction and having heroin “destroy his life”, Michael takes some comfort in the fact that there are more counselling and treatment services available to drug addicts now.

“My experience with heroin was that I got to a point where I couldn’t help myself. I really needed help and it was so, so, hard to reach out, but for any people in addiction who are listening, I understand how hard it can be but there are people who are willing to help and who can. It’s just something that you have to stick with,” he says.