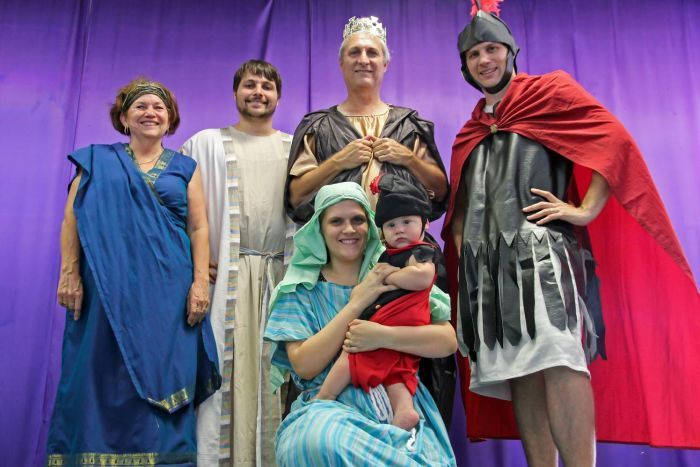 When the Frewen-Lords of Townsville visited a nativity scene re-creation 20 years ago, a new family tradition was born.

"We walked [in] and there was a real baby. The stunned look on all of our kids' faces ... was so impacting," mum Robyn said.

So when Townsville's combined churches decided to stage a re-creation in 1998, Ms Frewen-Lord wanted her family to be involved.

Ms Frewen-Lord is so heavily involved she is affectionately known as the 'mayor of Bethlehem'.

"Christmas is when we celebrate the birth of Jesus and I have found that Stable on the Strand [Townsville's re-creation scene] has brought that to life for us personally," Mr Frewen-Lord said.

Christmas is an extra special occasion for Mt Isa Catholic Marita Abeyakoon and her Buddhist husband Nadeesh Wickramasekara because they first met at a Christmas party in Sri Lanka.

They are now married, have a child, have moved to Australia and for their first Christmas here, will be continuing their Sri Lankan traditions.

Ms Abeyakoon makes traditional sweets and milk rice on Christmas Day to share with their friends of all religions and cultures.

"We have Sri Lankan friends and also we have Australian friends, but I'm not sure that they might like this taste or not," she said.

"We will have small coffee breakfast like that in the morning with milk rice and some of the sweets.

"It brings us together because [we have] different religions and different values sometimes, so with sharing, it's bringing all religions together."

Every Christmas Eve in Withcott, local volunteers from the rural fire service tour the small Darling Downs town with Santa and one of his elves, throwing lollies to the local children.

Brandt Tucker, 21, grew up waiting for Santa on the side of the road.

"I have memories of standing out on the street with my sister looking out for the big yellow truck with the flashing lights and noisy siren and Santa and lollies," he said.

"It was always the most awesome thing."

Now as a rural firefighter himself, Mr Tucker is possibly more excited than ever: "I'll be IN the truck!" he said.

Photo: Pieter Tjerkstra will play Santa to hundreds of pets at his boarding kennel and cattery in Rockhampton this Christmas. (ABC Capricornia: Blythe Moore)

For the past 21 years, Pieter Tjerkstra's boarding kennel and cattery in Rockhampton has been booked out over Christmas.

"I'd use the word massive," he said with a laugh.

"It's a huge period for about six to eight weeks with very, very early starts and late finishes."

As a result, Mr Tjerkstra and his wife always work on Christmas Day, sharing the festive spirit with their 150 animal guests.

"It's a bit different to the average [Christmas day]," he said.

"It's an early rise then I come down to the kennels, give them all hugs, cuddles, kisses and say Merry Christmas to the dogs and cats."

Mr Tjerkstra said many owners left presents behind for their furry friends, which he always distributed on Christmas Day.

Photo: Talia Carbis and her family celebrate the Biblical festival of Hanukkah but not Christmas. (Supplied: Talia Carbis)

Talia Carbis and her family from the Sunshine Coast stopped celebrating Christmas four years ago because it was not mentioned in the Bible.

"We just prefer the things God said to do and not the other things," she said.

Nevertheless, the Carbis family celebrates most of the festivals mentioned in the Bible.

The decision has probably been hardest for their children when telling their school mates.

They make up for it though by inviting their friends to the extra feasts and festivals they celebrate instead.

Her workplace is littered with 5 metre tall Christmas trees, life-sized gingerbread men and thousands of baubles.

While Christmas comes and goes for many each year, Ms Dawes looks at reindeers and sleighs all year round.

"Just imagine what everyone goes through setting up their Christmas tree, but it's on steroids as we're dealing with more lights and bigger trees," she said.

"Christmas for us is every day, all year. We're the magical people that install the decorations."

Ms Dawes said one of her Christmas traditions included buying snake lollies for her "work family" who work right up to and including Christmas Day.

"I give out lots of snake lollies at around 2am every Christmas shift to keep everybody going with sugar," she said.

As Andrew Hyde gathered around his nonna's and nonno's kitchen table in Mackay, he began to grasp the art of his family's Christmas tradition.

"One granddaughter, that's all she wants for Christmas.

"You could do it by yourself, but it would take too long. With three it is quite easy."

Mr Hyde said he enjoyed making pasta with his grandparents because it was a tradition that came from the heart.

"When you are eating it you think, 'Yep, there has been a lot of effort put into this'," he said.

"And it's made for us by Nonna and Nonno, and particularly at their age, it's always good to see them make it, and it always tastes just as good every year."

John Reynolds, 86, from Longreach spent much of his life working on properties and driving trucks, and said most of his Christmas memories were fairly similar.

"We'd just have ham and chicken, that sort of thing," he said.

"They're all pretty much the same over the years, some are dry and some are wet."

Each year the staff organises a party for the elderly residents, with snacks, plenty of tinsel and Christmas carols.

Mr Reynolds said it meant a lot to him and the other residents.

"They've done a wonderful job, the staff," he said.

"Even though they're getting paid they've got the job at heart."

Serving the flock on Christmas Day

Photo: Father John Daly at the Holy Rosary Church in Bundaberg currently decked out in purple and silver Advent banners, which will be changed to gold for Christmas. Fr John says Christmas sees their usual worshipper base of about 1,200 swell to more than 3,000. (ABC Wide Bay: Jodie van de Wetering)

Fr John and his colleagues are preparing for four local masses on Christmas Eve, including a special mass for children at a local theatre, and three more services on Christmas Day.

Christmas swells the ranks of the Catholic Parish of Bundaberg from about 1,200 worshippers on a normal weekend to more than 3,000 for Christmas services.

Midnight Mass used to be the main service, but Fr John said these days more people attended the earlier services like the children's mass.

After his official duties are done on Christmas Day, Fr John is planning to visit family for Christmas dinner — a tradition that's carried on since his childhood.

"I grew up in Bundaberg and we always went to midnight mass, we came home and had a feed, then got up really early and went to my grandmother's over on the north side," Fr John said.

"Every year we did that with cousins and aunts and uncles, and told all our family stories and celebrated Christmas. Those are lovely memories of childhood, with that extended family."