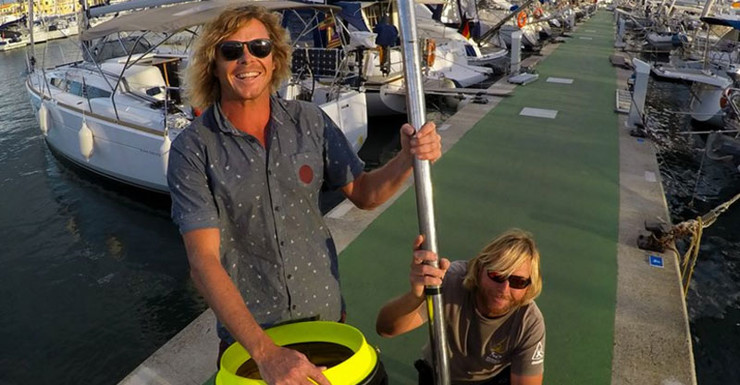 A unique ocean-cleaning technology developed by two Australian surfers has caught the attention of investors around the world.

Best mates Andrew Turton and Pete Ceglinski spent much of their childhood in the ocean and, after becoming frustrated at the amount of rubbish floating around, quit their jobs to come up with a sustainable solution.

They came up with an automated rubbish bin for marina docks called the Seabin that many hope could help reduce ocean pollution.

With the help of WA seed investors Shark Mitigation Systems, the duo designed a prototype of the bin in Perth before taking it to market in Mallorca in Spain, a marina capital of Europe.

Mr Turton and Mr Ceglinski are now trying to raise enough capital to turn the prototype into a reality.

The proposal is gaining momentum fast, with crowdfunding raising $50,000 for commercial production, and a video of the Seabin attracting more than 10 million hits online – mostly from European countries.

Built from recycled materials, the Seabin is fixed to a dock with water pump running on shore power.

The pump creates a flow of water that sucks all floating rubbish and debris into a natural fibre bag, before pumping the water back out.

It catches everything floating from plastic bottles to paper, oils, fuel and detergent.

“It essentially works as a similar concept to a skimmer box from your pool filter. But it’s designed on a scale to work and essentially attract all that rubbish within a location within a marine harbour,” he said.

From marinas to the open ocean

Mr Ceglinski said marinas, ports and yacht clubs were the ideal place to start cleaning up the ocean because they combined high levels of human activity with oil and fuel pollution.

“The Seabin is more efficient than a marine worker walking around with a scoop net,” Mr Ceglinski said.

It is hoped the invention will prevent toxic materials from floating out into the open ocean where they can degrade and be eaten by marine life.

“There’s not only the pollution side, but (it’s) for the broader environment, and then extending that through marinas into education for local communities as well, so that one day we can drive towards a cleaner environment for everyone that’s using the water,” he said.

Mr Turton and Mr Ceglinski have set up a research and development centre in Mallorca to develop production techniques.

“We want to build it in the most sustainable and ecologically responsible way we can, but to do that it’s quite expensive so we thought to give crowd funding a go,” Mr Ceglinski said.

“We also went to the METSTRADE show, which is the biggest trades show in the world for the marine industry.

“From that we found a few people that want to help us with manufacturing and we’ve also been in contact with lots of mariners and governments around the world.”

The concept aims to complement the more expensive option of using trash boats, vessels that drive around harbours scooping up rubbish with nets built into them.

If the venture is successful, Seabins could hit the market in mid to late 2016.