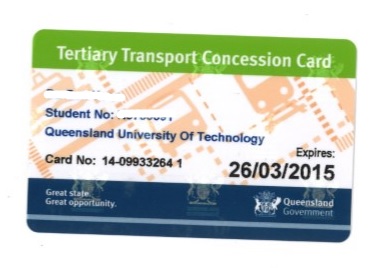 Queensland students will no longer have to carry three separate cards when they catch public transport following the announcement today the Palaszczuk Government has officially scrapped the LNPs Tertiary Transport Concession Card (TTCC).

The Deputy Premier and Minister for Transport Jackie Trad said the announcement delivers on Labors election commitment to remove the TTCC and clears the way for a new technology-based go card solution to commence from semester one 2016.

The former LNP Government claimed the TTCC would save $8 million dollars in fare evasion, however figures from the Department of Transport and Main Roads reveals instead of saving money the cost of creating this administrative hurdle for students was $1.7 million, Ms Trad said.

Figures from the Department of Transport and Main Roads show the true cost of the LNPs TTCC was $1.7 million over the 2014-15 financial year and the scheme only generated $1.7 million in savings well short of the $8 million claimed by the former LNP Government.

As a revenue-raising policy the TTCC is another example of a policy failure from the former LNP Government.

All it managed to do was to make public transport less accessible for students.

Ms Trad said the TTCC, introduced by the Newman Government, had been a bureaucratic nightmare for students and education institutions. The scheme forced all tertiary and post-secondary students in south east Queensland to carry their student ID card, go card and the TTCC card to access concession fares.

The Palaszczuk Government is committed to making travel easier on public transport across the state, Ms Trad said.

Removing this onerous, paper-based process means easier travel for students with one less card to carry and also less administrative burden on institutions.

Ms Trad said the Department of Transport and Main Roads is finalising a new go card solution that would be in place for semester one in 2016.

The new solution will make it easier for university students to travel on public transport and ease the administrative burden imposed on our education institutions, Ms Trad said.

The department is continuing to work closely with Queensland institutions in preparation for a new system which will offer an easier and simpler student experience.

We will advise students of all the details of the solution in advance of semester one.

From today and when the new solution is introduced, students will still need to meet all of the existing eligibility criteria and have a current student ID card issued by a Queensland institution.

Students who have a concession go card that is expiring can extend the expiry date at their local go card retailer in preparation for the new go card solution.