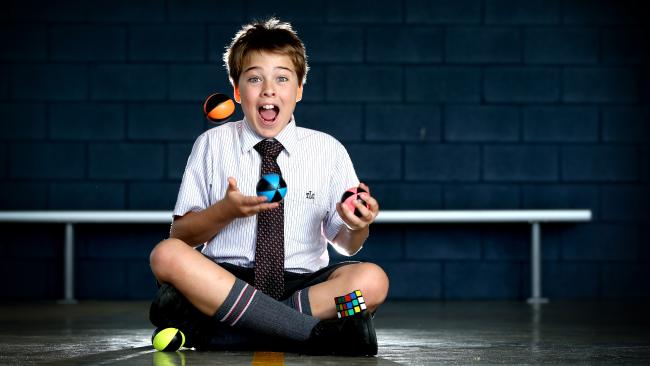 Juggling ?school, homework his passion to help others and his favourite pastime is a difficult act, but one that 12-year-old Conor Kikkert manages with ease.

The young boy from Deception Bay, north of Brisbane, can juggle in one hand while solving a Rubiks cube in the other ? and in a matter of minutes.

It takes me between one minute and two minutes to solve the Rubiks cube in one hand, Conor said.

If I use two hands (to solve the Rubiks cube, I can do it in 13 seconds.

He started juggling two years ago after he was given juggling balls for his 10th birthday and set a challenge from his dad.

My Dad could juggle and on my birthday he got me juggling balls and set me a challenge ? to do 100 juggles with three balls.

It took a few weeks of practice. It is a lot to do with practice and I used YouTube to help me learn.

He managed the challenge his father set him and has spent the past two years battling for bragging rights as to who is the better juggler. Everyone agrees Conors fire juggling and Rubiks cube tricks take the title.

He has created his own YouTube video demonstrating his skill, and will put it to the test at a local market on Sunday to raise money for those living in developing countries without clean drinking water

In science for the science fair I looked at water filtration, The Lakes College Year 6 pupil said.

I did a bit of research and found every day between 1000 and 2000 people under the age of five die because of water-related sickness.

Conor decided to busk using his juggling skills at the Redcliffe Jetty Markets on Sunday to support charity UnitingWorld.

The youngster has busked before and managed to raise $150 each time. He is hoping locals will support him this weekend at the markets from 8am to noon.

His best advice for anyone wanting to learn how to juggle is to practice everyday and when juggling do not look too much at your hands.