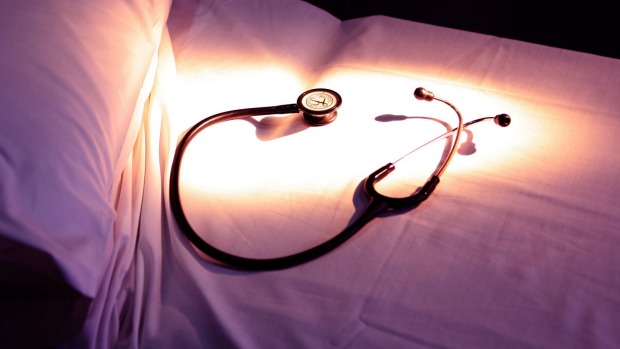 Queensland's worst outbreak of syphilis in 30 years has spread across northern Queensland with 500 new cases since 2010.

Only four years ago the Medical Journal of Australia predicted syphilis ? which causes lesions in the brain and blindness - would be eradicated in remote Queensland with screening and basic penicillin shots.

It occurs in four stages beginning with small, painless sores mostly around the genitals, but gradually turning to red rashes and blotches on the hands.

The escalating rate of syphilis in Queensland's far north is 300 times more frequent amongst indigenous people, than among the non-indigenous community.

The outbreak began in Queensland's Doomadgee four years ago and has now spread across the top of Australia.

Indigenous babies are dying with congenital syphilis, meaning the symptoms have been passed on during the pregnancy.

This fact sheet details the early warning signs of syphilis - which can cause blindness - if not treated.

In July this year the Northern Territory's Centre for Disease Control reported children as young as 15 were testing positive for syphilis.

Sandy Gillies, the general manager of Policy Innovation at the Queensland Aboriginal and Islander Health Council (QAIHC) said the 500 new cases could also involve other members of the community.

? ? "Mothers and young women who are pregnant ? how they pass that infection on to unborn babies ? I mean it has a much wider community impact," Ms Gillies said.

"And the point that really makes it hit home is that four years ago the Medical Journal of Australia reported that syphilis would be eliminated in remote Australia," she said.

"But yet today we are in the middle of the biggest outbreak in 30 years."

Ms Gillies said the rapid turnaround could be attributed to the winding back of sexual health screening services in North Queensland.

"In the days when we were screening we were also talking about it, raising awareness, providing people with information about safe sexual practices and sexually-transmitted infections," she said.

The widespread use of the drug "ice" being injected among indigenous people has also been identified as one of the core factors contributing to the outbreak.

"And people are now injecting ice, rather than smoking it and all of these factors ? these risky social behaviours are increasing the risk."

The serious outbreak was independently confirmed on Wednesday by Queensland Health, then by a senior North Queensland health expert, but first identified earlier this month by the University of New South Wales Kirby Institute for infection and immunity.

"Several babies have died and it has just been horrendous," the source said.

"It started in the Gulf country up around Doomadgee and Mornington Island a few years ago among young indigenous people."

The medical worker said the outbreak was not directly linked to changes to winding back public sexual health services in Queensland in 2011, but began as the changes were being introduced and could not be controlled.

"While all these changes and chaos was going on, this is when the syphilis outbreak was going on," the person said.

"So it was very hard to mount a good response to it in the middle of all the changes that were occurring.

"By the time Queensland Health was able to put together a good response to it, it had spread across to Northern Territory and out into the Kimberley's and the next thing is that there is concern that it will spread to Alice Springs."

The experienced source said this group of indigenous people were extremely mobile and the disease has moved across northern Australia in the past four years, angering Northern Territory health experts.

"It's across Far North Queensland, across the Territory and into the Kimberleys."

A well-developed blood test can easily identify syphilis and penicillin can treat it, the source said.

"You just give a shot of penicillin basically and that gets rid of it."

The biggest problem is making the young indigenous people of Far North Queensland aware of the serious problem.

"You have to have the community education in place and a lot more testing in place to treat it," the source said.

"And you have to have the workforce to be able to respond it."

Health Minister Cameron Dick is finalising a detailed regional strategy to the problem after being made aware of the extent of the outbreak.

"However I am very concerned with the current rates of infectious syphilis in parts of Northern Queensland," Mr Dick said.

"I've been working directly with Health and Hospital Boards in affected regions on how we can combat this issue," he said

"And I will have more to announce shortly."