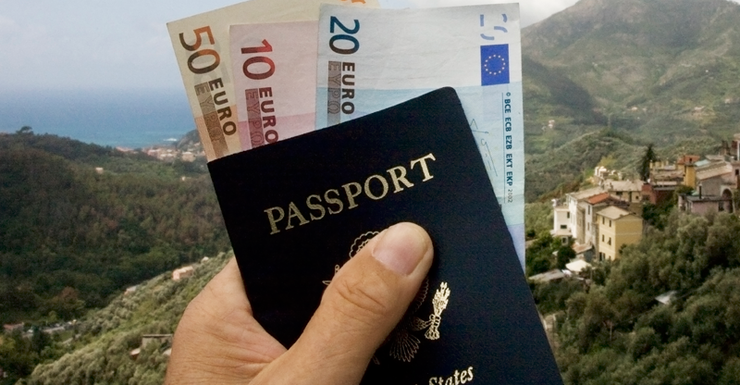 It is easily lost, stolen or damaged, and not needing one would make travel so much easier.

They are bulky and old-fashioned but do not fear because the days of unflattering passport photos are numbered.

The out-dated passport could one day be replaced and experts say we have already started transitioning to the ‘cloud passport’ of the future.

While the little book is our access key to foreign lands, it is easily lost, stolen and presents some security issues.

To replace a lost or stolen passport, the traveller must fill in a form, attend an interview and pay the application fee of $250 on top of the replacement fee of $111.

Add this expense to the experience of being trapped in another country and you’ll see passports are inconvenient to say the least.

In 2005, Australia introduced the ePassport, which included a chip that stored personal information and a digitised photograph.

This photograph stored on the computer chip and in the passports database, allowed passengers to be identified by a biometric system. In this instance, it was facial recognition technology.

Tech futurist Morris Miselowski said this was just one step closer to the invisible biometric passport of the future.

“I think we will move to the point in the next couple of decades… where we won’t have any passport at all,” he said.

“Where our origin, country of residence, birth will be known to people and we’ll be able to move through borders far easier and far quicker.”

The future for passports

In October this year, Foreign Minister Julie Bishop said a passport-free future was on the cards.

The idea for ‘cloud passports’ was suggested at a Department of Foreign Affairs staff competition.

“Australia prides itself on having one of the most secure passports in the world but by embracing and harnessing new technologies we might be able to do better,” Ms Bishop told News Corp.

Mr Miselowski said he envisaged a future with no physical passports and immigration.

Instead passengers would walk through a series of spaces that identified the traveller via biometrics, and then were allowed or denied access to the next stage.

Lesley Foo, 19, from Singapore, travels overseas up to eight times a year and is well acquainted with the passport.

She said a completely digital passport would make her travelling experience a lot easier.

“It would make it a lot faster, when going through immigration. There’s no need to wait in lines.”

Why do we still need to carry them?

We already have a lot of the technology needed to make this digital passport a reality, so why are we forced to carry the old-fashioned passport around?

Unfortunately, it is not that simple.

Mr Miselowski said there were many other factors to consider when implementing a change that would ultimately impact the entire world.

“Not only is it technological, it’s cultural, it’s political, it’s economical, it’s legal, there are all sorts of things we will have to overcome. To me the technology side is actually the easiest of all,” he said.

Easier? Or a recipe for disaster!

Despite this, the idea of ‘cloud passports’ has been met with apprehension.

Frequent international traveller Matilda Chappel,19, said she was happy with the traditional passport system and did not see the need for a completely biometric method.

“I would rather have a hard copy of a passport as you know it is there with you,” Ms Chappel, from England, said.

“Sometimes computer systems crash and this could lead to mass delays which would then lead to problems with connecting flights.”