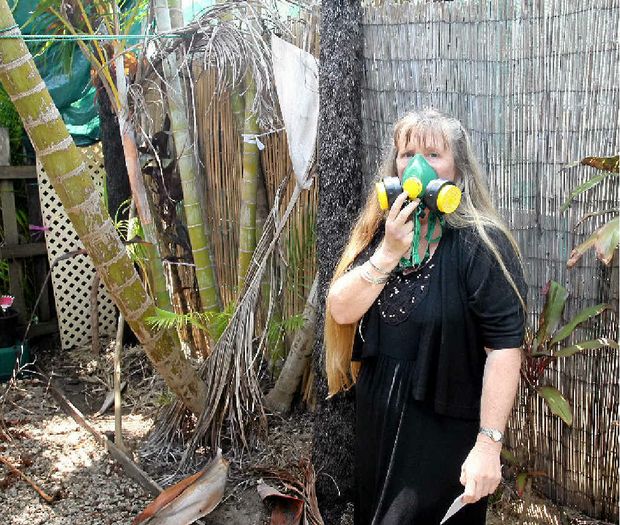 A neighbourhood dispute has turned poisonous with Caboolture woman Carrie-Ann Layton-Smith alleging that her neighbour has placed a toxic herbicide along their shared fence line.

Ms Layton-Smith said that the fumes have made her ill, causing headaches, breathing difficulties, tingling lips and nausea.

She alleges that the son of her neighbour, Lyn Naylor, placed the chemicals into the earth and onto her trees on Sunday October 18.

"He dug a trench along the fence line as close as you can get and he put some sort of toxic herbicide but we don't know exactly what," Ms Layton-Smith said.

Carrie-Anne said that the issues are because her neighbour "doesn't like the palm trees there. "

Since the fumes were sprayed Ms Layton-Smith said that her chicken and apossum have died. . She said that she found the possum lying on the ground on the day that the chemicals were allegedly sprayed onto the trees.

"I went outside to put it in the bin and it looked at me - it was still alive."

"The possum and her joey were brought into the Wildlife Hospital on October 19 in very poor condition with suspected Rodenticide poisoning."

A Moreton Bay Regional Council spokesperson said an investigation found the substance used was the weed killer glyphosate, alsoknown as Round Up.

Lyn Naylor said that the council has never tested the soil at the premises, instead phoned her to enquire about what weed killers she used.

"The only thing we spray is the once a year path weeder or Round Up," she said.

A Queensland vet has advised that Round Up is purposely designed so it isn't hazardous to animals and humans in reasonable doses.

"Theres big palms up the back, we've had to fence the garden off because we've got two little Foxies and those big fronds come down from 10 feet high or whatever it is," Lyn said.

"The owner left a gap for where we could put the ones that do fall down into my garden over the fence and she has covered that up.

Lyn denies any trench has been dug recently, and she has never seen any possums in the trees before.