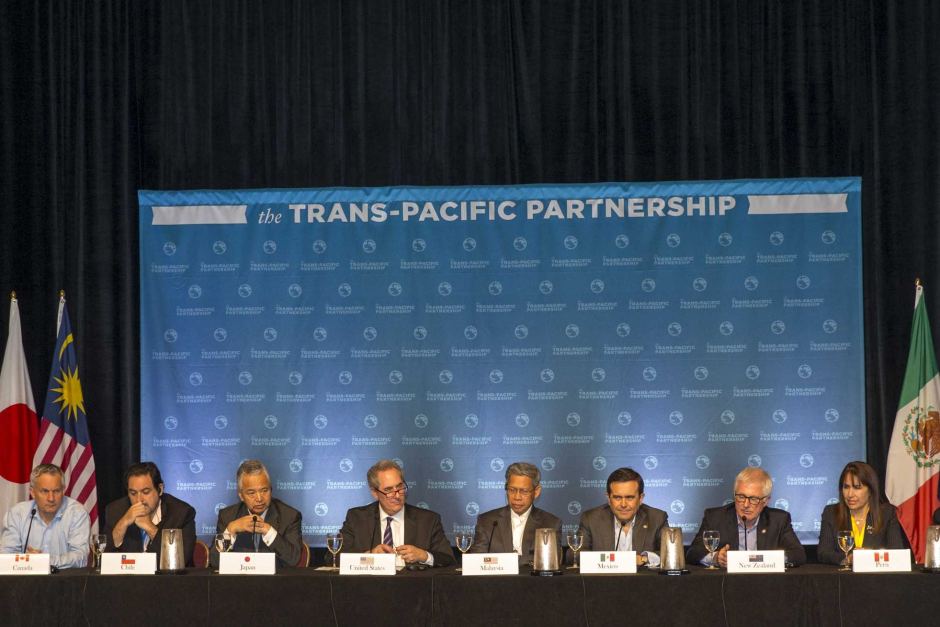 Trans-Pacific Partnership: '50/50' chance of trade deal today as negotiators lock horns over medical patent protection and how it can effect you

There is a 50 per cent chance the Trans-Pacific Partnership trade deal will be agreed to in the United States today, according to Trade Minister Andrew Robb.

In a statement, Mr Robb said negotiations over the 12-country TPP, which would cover 40 per cent of the global economy, had continued throughout the night in the US city of Atlanta.

But intellectual property protections for new biologic drugs remain a big, unresolved sticking point between the US and Australia.

The controversial Trans-Pacific Partnership deal covers 40 per cent of the global economy and involves 12 countries around the Pacific rim, including Australia and the United States.

"Australia's current arrangements ... are completely adequate and any proposed changes are non-negotiable, this is a red line issue for us," he said.

It is claimed any extension of the data provisions could hit the health budget, but other countries at the negotiating table have expressed concerns at the delay.

Japan's economic minister Akira Amari warned it could be the "last chance" of getting a deal.

The ABC understands progress has been made in industries like beef, horticulture, wine, seafood, grains and dairy but negotiations over sugar remain unresolved.

"So, that was our starting point going into negotiations."

However, he said, the TPP would be "great" for Australians in the long-run.

"It's giving Australia great market access to 40 per cent of global GDP."

The US allows pharmaceutical companies an exclusive period of 12 years to use clinical data behind the approval for a new biological drug.

The Obama administration had previously proposed lowering the threshold to seven years, but has pushed a proposal for an eight-year minimum in the TPP talks.

Australia ? along with others such as New Zealand and Chile ? has been unwilling to offer more than five years protection for the medicines, because longer terms would increase the cost of state-subsidised medical programs.

The Obama administration has been the prime driver behind the TPP, to create a foundation for "21st century trade rules," setting standards on trade, investment, data flows and intellectual property that eventually non-TPP members ? particularly China ? will have to accept.

Five ways the Trans-Pacific Partnership (TPP) could affect you

Consumer group Choice has warned that Australians could be worse off under the proposed Trans-Pacific Partnership, as trade ministers meet next week in Hawaii to try to finalise the agreement.

The controversial deal covers 40 per cent of the global economy and involves 12 countries around the Pacific rim, including Australia and the United States.

Advocates say the pact, which has been negotiated in secret since 2010, will boost investment opportunities and lower trade barriers.

But critics have concerns.

"This is going across every sector you could imagine of the economy, from the way we use the internet to the price of medicines," Matt Levey, spokesman for consumer group Choice, told the ABC.

Prime Minister Tony Abbott has stated the TPP could mean "everyone is better off".

So, here are five ways the TPP could affect you.

Under the TPP, Australia and other countries may impose criminal penalties for those found guilty of copyright infringement.

Mr Levey said the deal would likely see the criminalisation of copyright provisions that up until now have been civil penalties.

"So it might be taking a selfie inside a movie theatre and having some of the film visible in the background," he said.

Is TPP the bogey-treaty we think it is?

There's a lot to be gained from the TPP if leaders can reach an agreement, Chris Berg writes.

"You're talking about taking that into an offence which wouldn't previously existed. Once you bring in a harsher copyright regime, it's very hard to reform."

Mr Levey said there was a possibility the TPP could also harm Australian innovation in a digital world.

"Our big concern is that by signing up to the provisions in the TPP, we're potentially going to lock Australia into the last century, when we actually need a copyright system that's reformed for the future."

Supporters argue that copyright protections in the TPP promote the creation of new works.

"Companies won't do this work unless the original is protected by copyright," Annissa Brennan, from the the Motion Picture Association of America, was quoted as saying by news service Intellectual Property Watch.

The TPP would not require countries to provide information on where a food product comes from, which means it may restrict the ability of governments to identify how food was produced or whether it was genetically modified.

"There is a real risk that the TPP will make it even harder for us to get the simple, meaningful food labelling that Australian shoppers want in the supermarket," Mr Levey said.

The Australian government is not intending to sign up to international agreements that would restrict Australia's capacity to govern in our own interest.
Trade Minister Andrew Robb

"It might be that an Australian government comes along and says, 'OK, we want to make it much clearer when you're in a supermarket whether that product contains palm oil'. We could end up with restrictions under the TPP that would make that practice seem discriminatory."

However, the Government said there was nothing in the TPP negotiations that would weaken Australia's policies or regulations on food labelling.

"All parties negotiating the TPP will retain their current rights under the World Trade Organisation to make policy related to human health and safety," a spokesman for Trade Minister Andrew Robb told the Guardian.

"The Australian Government is not intending to sign up to international agreements that would restrict Australia's capacity to govern in our own interest."

Mr Levey said Choice was "deeply concerned" about the potential impacts from the TPP on the price of medicines.

"The TPP is very complex when it comes to medicines, and one of our particular concerns is it might delay the period until cheaper generic drugs can come onto the market," Mr Levey said.

"At the moment it's generic drugs that are often affordable for Australians, it's what our Pharmaceutical Benefits Scheme uses to subsidise medicine and ensure we are actually giving Australians access to medicines they need.

"Academics have ... estimated that actually keeping those generic drugs off the market for longer is ... going to increase the price of medicines for Australians."

Earlier this year, Medicines Australia wrote an open letter to Parliament urging policymakers to ignore the "alarmist and misguided" claims contained in media reports relating to the TPP.

"Nearly 10 years ago, when Australia and the United States signed a free trade agreement, critics similarly predicted the demise of the PBS," it said.

"They argued that prices for medicines in Australia would skyrocket and that Australian patients would be denied access to new and essential medicines. They were wrong." Corporate tribunals

Within the TPP is a clause on investor state dispute settlement (ISDS), which allows foreign companies to sue the signatory governments for loss of future profits.

Mr Levey believes having an ISDS clause in the TPP is unnecessary and "dangerous".

"We're particularly concerned when the Productivity Commission ? and they're not known for being anti-trade ? comes out and says ISDS is a risk too far, that the benefits don't outweigh the costs," he said.

"That's a big warning sign that this is not a necessary thing to have in the agreement, we can actually use the established legal system."

However, Mr Robb has said a lot of the statements about ISDS "amounts to deliberate scare-mongering".

He went onto say that Australia had "progressively engaged with now 28 countries with investment agreements which include an ISDS ... and the sun is still coming up every morning".

According to the Government and others, the TPP negotiations need to remain secret in order to reach an outcome.

But for many, it is the main criticism of the process.

"For those who say we have to keep the TPP secret, our answer is very simple: Look at Europe," Mr Levey said.

What we'll end up with is a take it or leave it deal.
Choice spokesman Matt Levey

"They're negotiating what is the mirror agreement of the TPP, it's called the TTIP [Transatlantic Trade and Investment Partnership].

"The Europeans have managed to do an almost identical process but make it much more transparent.

"We think it's no good way to make policy to be locked inside closed-door rooms in secret, not having the experts in there that we might have in our universities, in our industry, in our community sector, informing those discussions.

"And what we'll end up with is a take-it-or-leave-it deal."

Trade Minister Andrew Robb said the Department of Foreign Affairs and Trade has held more than 1,000 briefings with stakeholders, including health and consumer groups, about the TPP.

"The text will not be kept secret," Mr Robb said in a statement.

"Once it is agreed between participants, it will be made public and also subjected to parliamentary scrutiny prior to any final ratification."

A resolution to the lingering 12-nation TPP agreement expected today
TPP will be the world's biggest free-trade zone covering 40 per cent of the globe
Intellectual property protections for new biologic drugs are the main roadblock in discussions
Progress made in trade discussions over horticulture, wine, seafood, grains and dairy