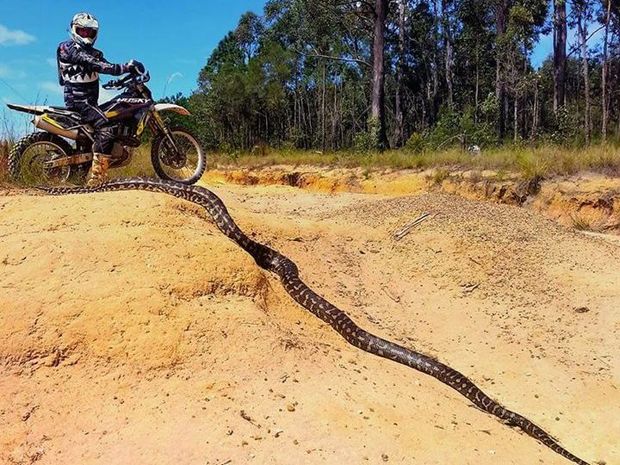 Soaring temperatures leads to a spike in snake activity, with residents in both rural and suburban areas told to look out for slithery behaviour.

Already some snake reports in Queensland began back in August, while late september this will ramp up as temperatures soar to the mid 30's more often then not.

Now is the time to be vigilant in our own backyards and homes throughout the Moreton Bay Region.

Also a lack of rain is luring snakes to water bowls and warned pet owners to be vigilant.

Snakes don’t go out to harm humans, but if you get in their path or startle them, they will bite and it can be fatal

The most precious gift for most families are the children. It is true although children know no fear, they are also unaware of the dangers that surround them even in safe and familiar suburbia

With warmer weather onset earlier and likely to be longer lasting due to hotter temperatures and more damaging storms.

Snakes do need to keep cool with these events and gardens rockeries and other shaded places snakes will frequent, in some local cases even home ceilings have been home to large and rather dangerous snakes so far this year.

So the key is to remain safe and wise with our surroundings.

QAS advises the most common mistake was people thinking they had to capture the snake for paramedics.

Snake Catchers in the Moreton Bay Region include :

QAS senior operations supervisor Rita Kelly said the most common mistake was people thinking they had to capture the snake for paramedics.

Paramedics have attended 493 snake bite cases so far this year, a 6 per cent increase from the same time frame in 2016.

There were 27 snake bite incidents in August, according to Queensland Ambulance.

Between 2014 and 2015 Brisbane reported 653 snake bite incidents, as snake activity increases things the public should remember to remain safe out there include:

Avoid walking through long grass, but if you have to, wear sturdy enclosed shoes and long pants.

Never try to catch or kill a snake.

When camping, ensure the campsite is well lit at night.

Take care when moving timber or iron sheeting and other outdoor building materials.

If you see a snake inside, get all humans and pets out of the room, shut the door, fill the gap underneath with a towel and call a professional snake catcher.

If you see a snake outside, call a snake catcher if it disappears into a shed or under a vehicle.

Remember that even small snakes can be dangerous - baby brown snakes have venom right from the egg.
Stick to the trails in parks and reserves.

Some basic first aid tips to help if you are in an incident including a snake bit include:

Avoid washing the wound as hospitals can test the bandage for poison and may be able to identify the type of snake, which will aid treatment.

Splint the limb to keep it straight.

Do not allow the victim to move.

Ensure the snake bite victim remains calm, as panicking will cause the heart rate to increase which will spread the poison around the body quicker.