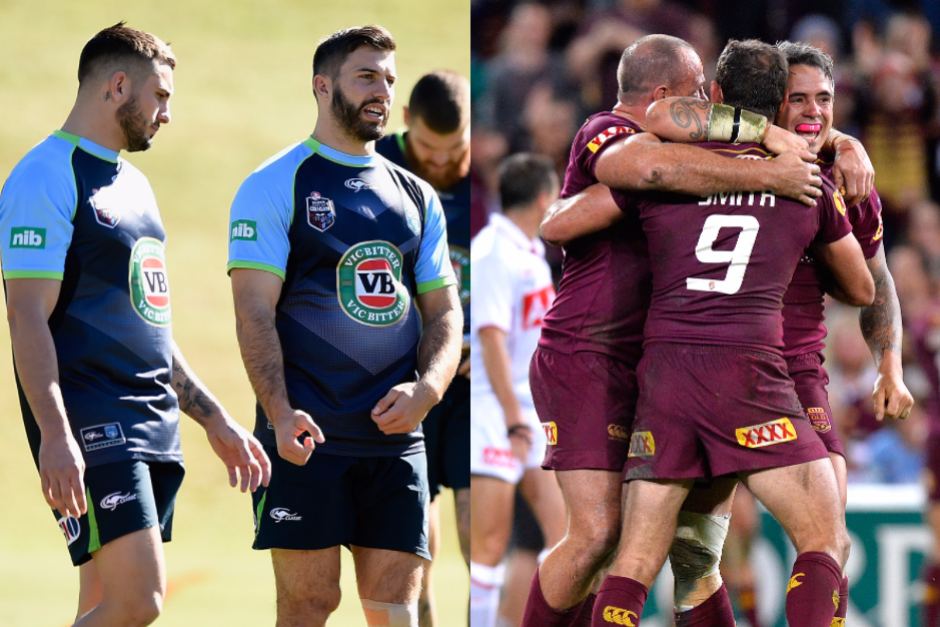 'There are no dead rubbers in State Of Origin.'

As well as our usual Origin live blog offering, this Wednesday you can follow along with State of Origin: Sidelines for a more light-hearted look at Game III.

Brought to you by three women who know the rules, want to win but mostly, have come to play. Strap yourselves in for a few laughs.

It is a (pretty obnoxious) cliche that is rolled out ad nauseam around this time of year.

But the passion and fight of these two teams are not the only reasons you should watch Wednesday night's game three.

The Queensland team has earned its 'Dad's Army' tag. Those blokes are old. Really old. Effective, but still old.

Even their newest face, Gavin Cooper, is 30 years old.

The Blues, on the other hand, are injecting more youth with every game and look to have finally hit upon something resembling the scariest version of their team.

We wrote before game two that New South Wales, thanks to some fortuitous injuries, had lucked into the right side and they subsequently came out and almost won a brilliant back-and-forth game in Brisbane. This time around selectors have been even less cautious in their selections.

James Tedesco earned his spot about 10 times over and it was a gutsy move by selectors to axe Matt Moylan, one of their better performers through games one and two, to pick the rampaging Tiger.

Jack Bird too was an excellent pick and proved his worth in limited game time at Lang Park. Whether Bird ends up in the halves, continues as a utility or heads back into the centres in the long-term does not really matter - having him in a team just makes it better.

Whether or not they are technically in the 'spine', Tedesco and Bird could very well be the backbone of the Blues as Origin slowly comes out of its Queensland-dominant era and Wednesday could be one of those 'I remember when...' moments.

Corey Parker was chaired off Lang park after his final Origin in Brisbane. (AAP: Dave Hunt)

The highlight reels for Corey Parker and Paul Gallen are not going to be thrilling to watch and rewatch years from now.

Straight running interspersed with the odd offload here and there is hardly Mark Coyne's game winner in 1994 or Billy Slater's chip and chase, but that dog's body work is as much a part of Origin as all the flashy moments.

Gallen's numbers are insane by any stretch of the imagination and it is probably unfair to level all the criticism at him for the Blues' struggles in the past decade.

He has led from the front in every sense of the word and reignited the genuine hatred between the states through a combination of questionable plays and inflammatory comments to the media.

After making his Origin debut as a barnstorming young Broncos prop way back in 2004, Parker played the bulk of his games in maroon after journeying to the back of the scrum and developing one of the best offloads in the game.

These two work as hard as anyone ever has on a football field and watching them on the game's best stage is too good an opportunity to pass up.

Regardless of what happens on Wednesday, Queensland will be celebrating with the shield in Sydney.

Keep an eye out for poor Cameron Smith, once again handing the spotlight over to a retiring player. Since taking over the captaincy from Darren Lockyer after 2011, Smith has constantly been upstaged.

But in 2015 Justin Hodges received all the attention:

Smith welcomes Justin Hodges on to the stage in 2015. (Getty Images: Cameron Spencer)

And this year he will most likely have to hand the shield over to retiring Parker for his last moment in the Origin sun.

Breaking out the broom

Origin clean sweeps are rare. Of the 34 completed series in Origin history, on only seven occasions has one team failed to get on the board.

Even during the peak of the Maroons' eight straight series wins they only managed one, in 2010. Wally Lewis' teams only managed two during the King's reign. The Blues have not gone unbeaten since the start of the millennium.

Sure, Queensland has two probable Immortals Johnathan Thurston and Smith, but is missing a number of the players that made it great during the streak.

This Maroons outfit features only two members of its ideal back five (Slater, Darius Boyd, Greg Inglis, Will Chambers, Valentine Holmes) and at least one, but more likely two forwards who are in the team basically because selectors had no other options.

If this semi-spare-parts team can run the board it would probably be about as close to that ridiculously under-staffed 1995 team's sweep as we are going to get.

In saying all that, the sweep is pretty long odds to actually happen.

The Blues appear to have taken another step towards the right team, while another injury, this time to Michael Morgan, has robbed the Maroons of some of their vaunted speed and versatility.