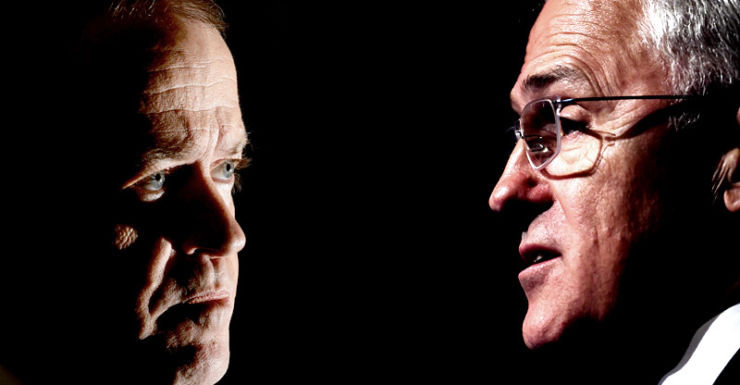 Political crisis looms as neither the LNP or ALP look likely to form government.

For Malcolm Turnbull and Bill Shorten, the number 76 has a magical ring to it.

That’s how many seats that either the Coalition or Labor requires to form a manageable government in the House of Representatives.

There are 150 seats in the lower house. To make government workable, a party needs a two-seat majority so it can appoint a Speaker and command a majority of one on the floor of Parliament.

Both Mr Turnbull and Mr Shorten have signalled they are keen to negotiate a path to government by establishing a working relationship with at least some of these MPs. But neither of the major parties seems likely to win 76 seats in its own right.

Labor or the Coalition will have to rely on support from one or more crossbench MPs to get a government up and running.

There are six seats in the new House of Representatives that are likely to be occupied by independents or representatives of minor parties.

Some of these MPs are poised to become kingmakers in the new parliament and will emerge from the following people:

Nick Xenophon could be key to both parties. Photo: AAP

How the Coalition could form govt

The Coalition is clinging to the hope that it may still be able to win 76 in its own right, but that would require all of the ten marginal seats still in doubt to fall the government’s way.

Australian electoral history suggests that is unlikely to happen, especially in hotly-contested Queensland seats such as Capricornia and Herbert where Labor candidates now lead by around 1000 votes each in two-party preferred counts.

The process would be less complicated for the Coalition if it could secure at least 75.

With this number of seats, the new government might be able to govern with the explicit support of the Nick Xenophon Team — and possibly implicit backing from a few others.

From a risk management perspective this seems the only workable scenario for the Coalition.

Why the Coalition may struggle

Bob Katter seems like a natural fit for the Coalition, but maybe not. Photo: AAP

If Mr Turnbull lands only 73 seats or less he would have to rely on a disparate crossbench that might be ideologically unattractive to the Coalition’s conservative-leaning MPs.

In the case of two crossbenchers, even an informal alliance might look ridiculous.

Mr Katter is detested by senior National MPs for his decision to desert the party 15 years ago. He is a difficult fit for the Coalition.

So is the returned member for Indi, Cathy McGowan. Her support for marriage equality and humane treatment of refugees, and opposition to free trade and cattle grazing in national parks, is likely to put her at odds with any conservative government.

The Coalition would probably not bother leaning on Mr Bandt of the Greens and Mr Wilkie might be a reluctant starter in light of Tasmania’s resounding rejection of the Coalition at the July 2 election.

There is also a paradox that weighs on the Coalition’s prospects of entering minority government: The idea is attractive to Mr Turnbull because his future as leader hinges on him staying in power.

But it may not be attractive to conservative members of his party who actively discouraged former leader Tony Abbott from doing a similar deal with independent MPs after the 2010 election.

How Labor could form govt

Mr Shorten appears to have more political wriggle-room than Turnbull given the policies of the Greens, NXT and the independent MPs.

Cathy McGowan could also be a difficult sell for the Coalition. Photo: AAP

With the exception of Mr Katter, the socially progressive platforms of the other five members appear consistent or at least reconcilable with ALP policies.

It is not clear what sort of arrangement could be negotiated but it is likely that crossbench members would resist entering a formal deal that might appear to taint their independence in the eyes of their voters.

Why Labor may struggle

While the path to government for Bill Shorten looks more feasible, it is also fraught with danger.

Mr Shorten and senior members of his caucus would no doubt be mindful of the destructive potential of minority government.

The compact signed in 2010 between the Gillard Labor government and NSW Independents Tony Windsor and Rob Oakeshott ultimately contributed to the electoral demise of all political stakeholders.

So what will happen?

The most likely scenario based on the current standing of the major parties is that both will finish with 72 seats apiece.

If that happens, Australians should expect another election in early spring because neither major party would likely take the gamble of relying on up to five crossbenchers to keep the wheels of government turning.