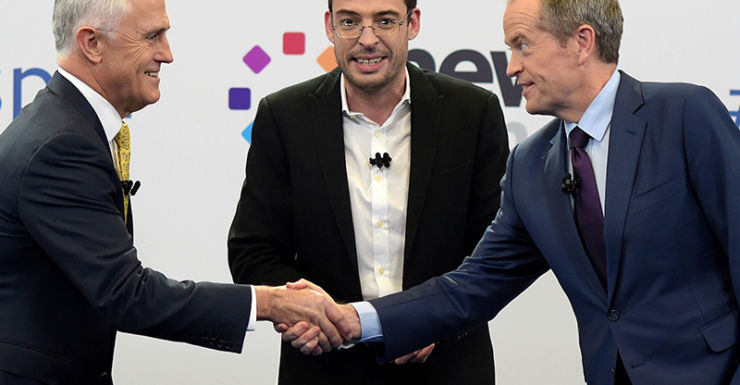 Federal Election 2016: The zinger that won the debate for Bill Shorten

The one-liners helped, but policy detail got the Opposition Leader over the line.

“Press ‘like’ if you want fibre not copper,” Mr Shorten interjected while Prime Minister Malcolm Turnbull was talking about the rollout of the National Broadband Network.

He was rewarded with a wave of ‘likes’ according to a Facebook analyst present at the live-streamed online contest.

Provoked by a Shorten bagging of the NBN, Mr Turnbull asserted his version of the NBN would connect more households in the next month than Labor had done in six years.

But despite constant buffering of the live stream of MC Joe Hildebrand’s debate at Facebook’s Sydney HQ, the online audience of up to 14,000 sided with Mr Shorten.

His NBN critique highlighted the technological deficiency arising from the Coalition’s dependence on copper instead of optical fibre, which is considerably faster.

A victory for detail

Mr Turnbull says he and his wife Lucy are supporters of same-sex marriage. Photo: Getty

So too did a clear majority of the marginal seat voters hand-picked by polling company Galaxy for the debate audience.

“We will not make any change to penalty rates. That is a matter for the Fair Work Commission,” Mr Turnbull said.

After the Orlando gay nightclub massace on the weekend, both leaders found themselves drawn to the domestic issue of the Coalition’s plan for a plebiscite – a public vote – on same sex marriage.

Mr Turnbull repeated and he and his wife Lucy would be supporting marriage equality.

“My party decided before I became prime minister to put the matter to the Australian people for a plebiscite,” Mr Turnbull said.

Mr Shorten warned of the “hate and homophobia” a plebiscite campaign would bring and said that whomever won government on July 2, the parliament should legislate immediately

Although Mr Turnbull obviously supported marriage equality he remains a captive of hardliners in the Liberal Party. It was a matter of leadership.

Mr Shorten has also raised the violent murder of UK Labor MP Jo Cox to assert domestic politicians would continue to interact with constituents throughout Australia.

With the 6pm Friday timing of the final debate and its niche Facebook online audience, it has become apparent that the Liberal Party has made a calculated decision to diminish the political impact of Turnbull/Shorten debates as much as possible.

Mr Turnbull is considered to be winning the visuals on the evening prime time television news. But when it comes to extended TV debates, he has lost more than he has won, a point now confirmed online.

Mr Turnbull, buoyed this week by marginal seat polling showing voters there are not reaching for their baseball bats, will be relieved that the 2016 debates are now over.