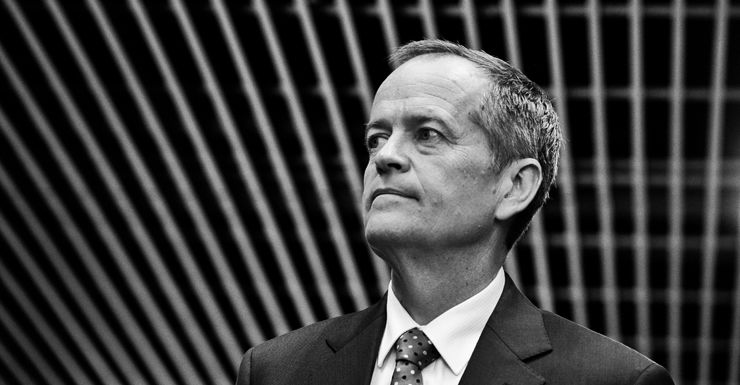 This emerged on Monday when Shadow Communications Minister Jason Clare dodged a demand from ABC radio presenter Fran Kelly to name the towns and regions to be covered by his promised upgrade.

“This is going to do nothing for NBN coverage in the bush, it it?” Ms Kelly asked.

“No, no, quite the reverse,” Mr Clare replied. “You will see, Fran, over the next few weeks that many of these two million premises in regional Australia.”

Labor is expected to go hard in the final countdown to polling day with local announcements of homes and businesses on its NBN upgrade list. This will politically exploit the growing outrage over what, on current technology, is likely to become systemically slow internet speeds in Australia, compared to a global average.

Mr Shorten was keen to promote his NBN plan during a visit to a Sydney photographic studio. Photo: AAP

And with Prime Minister Malcolm Turnbull declaring Australia needed an economic transition through agility, innovation and smart startups, a second-rate NBN under his administration has emerged as a significant political vulnerability.

Mr Shorten has committed to phasing out the currently contracted fibre to the node/copper rollout with fibre to the premises for identified areas to be announced.

This would give higher fibre connectivity to an extra two million homes by 2022, lifting the number of houses and businesses covered by fibre to 40 per cent, from only 20 per cent currently on track under the Turnbull government’s contentious NBN copper-dependant plan.

If elected, Infrastructure Australia would be commissioned to plan a strategy for extending fibre to the premises from currently planned node/copper delivery in future years.

Mr Clare said Labor would lift the government’s current cap on NBN costs by one billion to $57 billion.

Although the capital cost of fibre-to-the-premises was higher, the operational cost of running it was lower because of high copper maintenance and electricity charges for 30,000 nodes.

“We connected more premises to high-speed broadband with the NBN in the last month than Labor did in six years. Now they have no credibility on this issue,” Mr Turnbull said.

“This project is being rolled out. It will shortly be available, very shortly, within weeks, be available at a quarter of all Australian premises and two years later it will be available at three quarters and within a year or so of that by 2019-20 it will be complete.”

Mr Turnbull has yet to respond to industry criticism and the user peak body Internet Australia that internet speeds are inevitably slower under node/copper and that fibre to the premises is the optimal higher speed broadband system.

Mr Turnbull has committed $1 billion sourced from the Clean Energy Finance Corporation to help protect coral and biodiversity along the Great Barrier Reef.

Significantly, he acknowledged that climate change is adversely impacting the reef.

He blamed Labor for damaging the reef through “mismanagement” with five dredge disposal projects planned in the Great Barrier Reef Marine Park which put the reef on the World Heritage Committee’s in-danger watch list.

Neither party is able to say how effective their extra spending will be in protecting the reef from coral bleaching, the predatory crown of thorns starfish or species extinction.