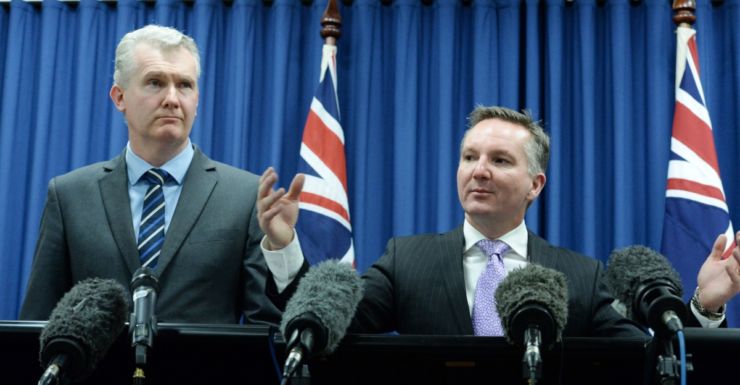 Labor’s final costings leave budget $16.4 billion worse off, but with bigger surpluses in the long run.

A Labor government would leave the federal budget $16.4 billion worse off if it wins the July 2 election, but maintains it would match the Coalition and return to surplus by 2020-21.

In the near term, Labor would have a $39.5 billion deficit in 2016-17 compared to the $37.1 billion predicted by Treasury and the Department of Finance in the pre-election economic and fiscal outlook.

Labor will also use almost $3 billion from the Coalition’s superannuation changes, without committing to adopting the policy.

Mr Bowen said Labor would deliver $10.5 billion in savings over the next decade, bringing its total budget improvements to more than $130 billion.

“Labor confirmed they will increase the deficit by $16.5 billion at least,” Mr Morrison told reporters in Sydney hours after the opposition released its final campaign costings.

“They confirmed, therefore, that they would increase debt.

“This is something that will weaken our economy at a time when we need to be doing everything, particularly right now, to strengthen our economy.”

Shadow Finance Minister Tony Burke said the Coalition’s figures could not be trusted because it had included savings from unlegislated measures that were yet to pass the Senate.

“They have $6.9 billion worth of measures known as zombie measures that they have embedded into the budget bottom line that will never, never pass the Parliament,” Mr Burke said.

“They cannot and will not deliver the numbers that are contained within the budget.”

“The Coalition is actually deliberately putting forward a structural deterioration,” he said.

“The hit to the budget gets worse and worse year on year.

“Whereas Labor, by putting forward the changes in particular to negative gearing and capital gains tax, has a structural improvement to the budget that the budget and the nation needs.”

Labor has also announced it would save $430 million over four years by placing a $5,000 cap on the amount people can claim for the cost of managing their tax affairs and removing the Private Health Insurance Rebate from so-called “junk policies” that only cover public hospital treatment.

Mr Bowen said Labor responded to advice from medical and consumer groups, who have been calling for the rebate to be scrapped for junk policies, or for them to be banned.

Buried inside Labor’s fiscal documents was the news that the party would bank the $2.9 billion in savings from the Coalition’s superannuation changes, while not pledging to adopt the policy.

“Labor would consult with stakeholders and take a broader examination of all these measures on coming to government.”