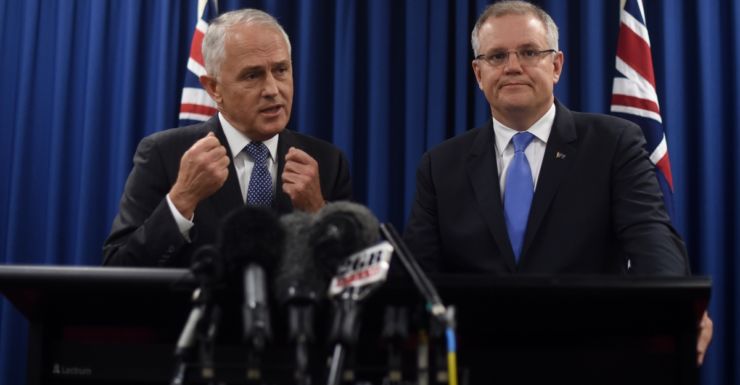 Federal Election 2016 : GDP A nice number for Malcolm … but it’s not all good news

GDP growth was a golden opportunity for the Prime Minister. He almost flubbed it.

The announcement of Australia’s 3.1 per cent GDP growth gives the Turnbull Coalition a big political boost, but it could have been so much bigger.

Wednesday was the government’s best day yet on the campaign trail, but it was marred by a discordant backlash from within the Coalition’s own ranks over its superannuation reforms.

On economic management, the government looks like it knows what it’s doing. While this is handy in positive perception terms for voters, it masks the real uncertainty facing the domestic economy. National living standards are falling.

The 1.1 per cent March quarter growth, now annualised to 3.1 per cent and said to be the strongest in four years, the fastest in the Western world, has come in above expectations, based, it now emerges, on higher volumes of liquefied natural gas exports.

But what is called ‘nominal’ GDP growth, an audit of hard money coming in to the Australian economy, indicates that while export volumes have grown, lower prices being earned for them mean less tax and revenue for government.

For a country already in deficit distress and facing relentless health, education, defence, infrastructure and social security demands through population growth, the real story is not good news.

Wage growth is negligible, jobs growth will be patchy. There was a solid 1 per cent contribution to growth from exports while household consumption contributed only 0.4 per cent. Business investment remained weak.

Mr Bowen warned there was still fragility in the new figures. Photo: AAP

Next week the Reserve Bank will have to determine if another 0.25 per cent interest rate reduction is necessary to further stimulate the domestic economy. The Reserve Bank board has a legislated obligation to contain inflation (no problemo) but also to set strategy to lower unemployment.

“So far, so good,” said an upbeat Malcolm Turnbull. While both the Prime Minister and Treasurer Scott Morrison were understandably quick to claim credit for the GDP number, they did acknowledge the economy was fragile.

“So we acknowledge that the investment figures in the national accounts and particularly in non-mining investment are critical to future growth and us moving through this transition story. That is why you need to do things that boost investment, not tax investment,” Mr Morrison said.

Shadow Treasurer Chris Bowen also highlighted Australia’s economic fragility: “In these figures today we see the eighth consecutive decline in income, meaning a decline in living standards … the most sustained decline in our history.”

These macro and nominal GDP figures are likely to frame the who’s-the-best-economic-manager debate for the remainder of the election campaign.

Dissent over the Turnbull government’s superannuation reforms has emerged from within Liberal Party supporters.

Some have backgrounded journalists that they will not be making campaign donations to the Liberal Party.

West Australian MP Ian Goodenough flagged his intention, with other Liberals, to raise the issue inside the party room after the election.

This follows complaints to radio shock jocks, 3AW’s Neil Mitchell and 2GB’s Alan Jones, about possibly unintended consequences arising from the reforms for low- to middle-income earners trying to boost their super nest eggs in the later stages of their working lives.

The Turnbull government has imposed a $1.6 million cap on tax-free super but with a still concessional 15 per cent thereafter. But other caps on yearly top-ups and a now taxable ‘transition to retirement’ phase have outraged ‘nest eggers’.

On Wednesday Greens senator Sarah Hanson-Young made a hash under questioning about her party’s super reform proposals.

While both the Labor Party and the Greens also propose to limit existing too-generous tax concessions on super, the harshest criticism is being directed at the government.

So far Mr Turnbull and frontbencher Christopher Pyne have held the line, with Mr Pyne rejecting Mr Goodenough’s complaints saying the reforms had already been approved by the Liberal party room.