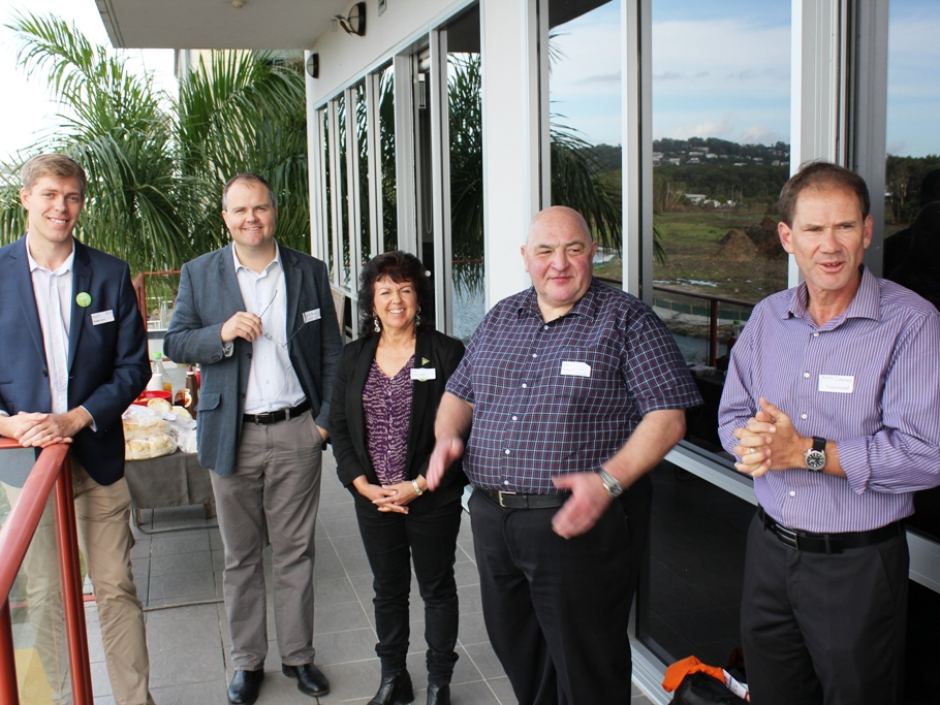 After decades of stability in the LNP's hands, the last three years have been an interesting ride in the south east Queensland seat of Fairfax with Palmer United Party's Clive Palmer controversially claiming victory over the LNP's Ted O'Brien by just 53 votes in 2013.

The ABC's election analyst Antony Green expects that Fairfax — which spans more than 1,000 square kilometres from Maroochydore on the coast to Mapleton in the hinterland — will revert to being a safe LNP seat.

But that is in the hands of people like these Fairfax voters who attended ABC Sunshine Coast's Election Grill and pushed candidates on issues including the Bruce Highway, employment, the NBN and internet connectivity, mental health, domestic violence and the cost of living.

Helen Andrews was a stay-at-home mum for 15 years and found returning to the workforce "isolating and really difficult" to find support.

Ms Andrews resorted to creating her own job in the form of the online platform Spare Harvest.

"We talk about getting a job, maybe we need to change the conversation to creating our own jobs and adding meaning into our lives, but there is no support systems, no infrastructure around for us to come in and create our own employment.

And she said the biggest challenge was reliable and consistent internet, which was detrimental to her business.

"Some days we have a connection and some days we don't, and no-one can run their lives or their business with an inconsistent connection," Ms Andrews said.

"So whatever they give us at least be consistent so we can actually work our lives around that consistent connection.

"I go to third world countries and they've got better broadband access than what we have."

Sociology student Wallea Eaglehawk, 22, was passionate about the NBN and internet connectivity too.

"I run my whole life on the internet," Ms Eaglehawk said.

"All the businesses I run, all the work that I do is on the internet and at the moment it's just atrocious.

"One day I'm able to complete my work on time and upload ... and other days the internet's just not there it's ridiculous."

Ms Eaglehawk said another issue she faced along with her peers, was contributing in a meaningful way to society.

"And I'm not just talking about cafe jobs, which are hard enough to come by in themselves, but careers that we can actually see ourselves working at in the next 20 years."

Richard Bruinsma is keen for candidates to address poverty and the cost of living. (ABC Sunshine Coast: Kylie Bartholomew)

Journalist and former LNP staffer Richard Bruinsma said after his time in politics he realised how difficult it was for politicians to actually achieve outcomes for a community.

He works on two community newspapers at Coolum and in the hinterland.

"We can't think of one edition of our papers which hasn't been affected in some way with faulty email or faulty broadband," he said.

"There's a danger that it's actually going backwards on the Sunshine Coast at the moment."

With up to 50 per cent of the Sunshine Coast population living below the poverty line, Mr Bruinsma was keen to hear how candidates would address rising living costs.

"It's probably very overlooked on the Sunshine Coast, but a lot of children are going to school hungry and it's a much, much bigger issue than a lot of people realise," he said.

"It's one of those issues which is a little bit embarrassing ... so it doesn't get raised and it's difficult to know how big it is and it comes back to the cost of living."

The Fairfax electorate was created in 1984 and named after Ruth Fairfax, the founder and first president of the Country Women's Association.

Wendy Ritchie, the president of the Maroochydore QCWA branch, said the organisation was seeing an increase of domestic violence in the seat of Fairfax.

She was also concerned about living affordability.

"Our population on the coast is getting older, we need more rentals, pension increase, they're also below the poverty line and surely we should be able to look after our pensioners better?"

Malcolm Chilman, from Coolum Business and Tourism, raised the issue of preferential voting, particularly in light of the outcome at the previous federal election.