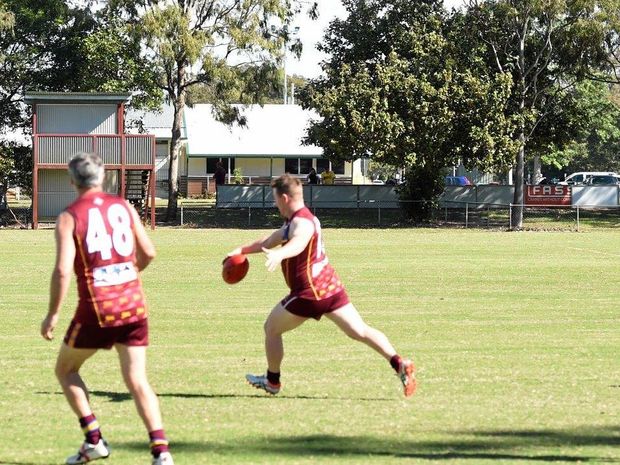 The Bribie Island/Glasshouse over-35 masters team have continued their dominance in the competition after a 17-goal home win against the Hervey Bay Fruitbats on Saturday afternoon.

Their fifth win in a row makes them an unbeaten force to be reckoned with but Bribie/Glasshouse will most likely face a much stronger Fruitbats side in Hervey Bay in a fortnight.

Despite windy conditions, Bribie/Glasshouse coach Damian Clarke said his team’s skills were on the money and the scoreline showed it. They won 21.13–139 to 4.2–26.

Bribie/Glasshouse led all four quarters but Clarke said it was his team’s ability to turn it up in the third quarter that won the match.

“We were ahead but it wasn’t convincing and the second quarter was the same sort of thing,” he said.

“We made the most of the opportuinites we had when we took it in the forward line and they broke down a little bit in their forward line. We repelled really well across half-back.

“The third quarter is when we kicked six goals to northing.”

“It just managed to keep falling in his hands,” Clarke said.

Midfielders Tim Wagner and Adam Court were voted best on ground but Clarke said Lachy Herron also deserved praise for his courageous performance in the ruck.

“He went back out with a broken finger in the last quarter but that’s masters,” he said.

Clarke said Herron’s commitment was just how his team and many others in the competition play the game.

“Masters is the sort of competition where they get injured and they’ll still push through because it might be the last game they ever play,” he said.

“They work on the theory, ‘if I’m hurt, it can’t get any worse’. That really is the essence of what master is about.

“They’re just prepared to go out, have fun and generally play it in good spirit while still being competitive.”