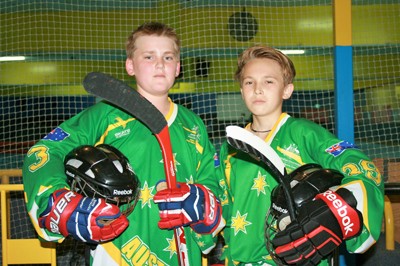 Representing your country in Hawaii – it doesn’t get much better than that.

Bunya locals and Pine Rivers Dragons players Nick Scanlan and Aiden Catakovic are preparing to play for Australia at the Inline Hockey Junior Olympics to be held in Hawaii in July.

Australia will be represented in seven male and female divisions at the four-day tournament at the Kapolei Inline Hockey Arena, from under 12s to open men.

As well as “checking out the local beaches and having fun”, Catakovic, 12, intends to use his sporting experience in Hawaii to improve his inline hockey game.

“We’ll get to see other countries train and play.

“We’ll see if we can bring any of those skills back to the Pine Rivers Dragons,” he said.

“We’re always looking for new plays that can give us an edge over the competition.

“I play defence but I also enjoy forward as well.

“I need to be able to guess what play the other team is going to use.”

“I can’t wait to play against different countries and check out how good USA are,” Hocking, 12, said.

“They’re considered to be the best in the world.”

Pine Rivers Inline Hockey Club President Kerry Scanlon said the Australian players could “expect to play some hard and fast hockey” at the tournament, hosted by the American Athletic Union.

“It really is a great benchmark to show where Australia sits amongst the best jun-ior hockey teams in the world,” she said.

“Last time in 2013, the Australian under-12s won gold, so we’re hopeful of at least repeating that and even having more age division teams bringing home medals.”