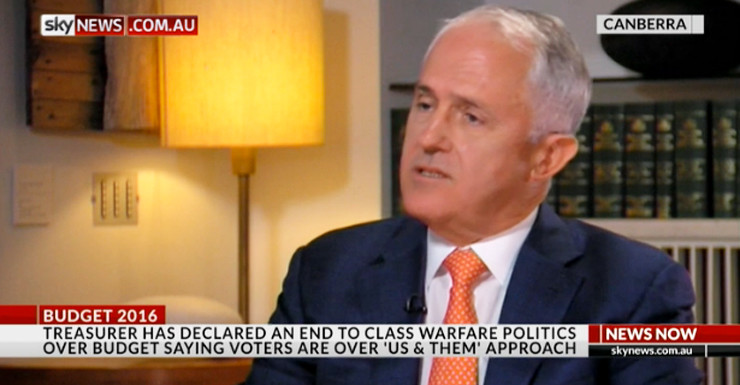 Malcolm Turnbull may regret one interview and one question

The question was simple: how much? But the PM couldn’t, or wouldn’t, answer.

Prime Minister Malcolm Turnbull has been accused of trickery and evasion after refusing to clarify the cost of his budget’s key measure, another stumble in a shaky start to the election campaign.

The PM gave conflicting answers when interrogated on Thursday by Sky News political editor David Speers about the long-term impact of his government’s generous incentives to small business owners.

The headline measure of the 2016-17 budget was a 10-year plan that would eventually drop the tax rate for incorporated small businesses from 28.5 per cent to 25 per cent and radically redefine the meaning of “small business” from $2 million annual turnover to $100 million.

Mr Speers echoed the question of Labor: how much will this 10-year plan cost? Despite being asked repeatedly in various ways, the Prime Minister dodged, then flat-out refused to provide a dollar figure, frustrating the journalist and inviting attacks in Parliament from the Opposition.

The budget predicted an approximate cost of about $5 billion in lost government revenue over the next four financial years, but did not break down the long-term cost. Deloitte Access Economics director Chris Richardson has estimated the 10-year plan would cost approximately $55 billion in lost revenue.

Two of Mr Turnbull’s answers seemed contradictory. “Well, the Treasury has not identified the dollar cost of that particular item” was his first reply.

This may imply the government embarked on a substantial budgetary measure without an idea of its long-term impact on government revenue. The other interpretation is that Treasury modelled the number, and that the government refuses to disclose it.

The Prime Minister then seemed to change his answer. “The Treasury has modelled that and set it out in the budget showing in the medium term outlook.”

Mr Turnbull clarified later that “medium term” was a reference to this year’s budget forecast that the budget would return to balance by 2026-27. This prediction did not include a breakdown of the full cost of the small business tax cut.

The journalist appeared to become frustrated. “So what is it? I don’t understand what the cost is.”

Mr Turnbull repeated the “jobs and growth” slogan, fell back on his “medium term” answer, and then gave a blunt refusal: “I’m not going to add to the detail in the budget papers.”

The Prime Minister’s performance was criticised by Labor and many political pundits. Labor treasury spokesman Chris Bowen asked 13 questions during Thursday’s Question Time on the topic and moved a motion to censure the government.

While Mr Turnbull did repeat the “jobs and growth” mantra, what he failed to explain to voters was the simple argument for the 10-year plan: that small business owners will hopefully employ more workers with their extra cash. This argument was endorsed by Mr Richardson, who described the $55 billion price tag to the Australian Financial Review as “pretty cheap”.

Poor answers to simple “how much?” questions can have devastating consequences during election campaigns, as then-Opposition Leader Dr John Hewson learned during the infamous birthday cake interview shortly before the 1993 campaign.

The PM’s failure to clearly communicate this point follows another prominent gaffe. During an ABC radio interview on Wednesday, he joked that the host, as a “wealthy” journalist, should “shell out” to help his children buy a house if they struggled with housing unaffordability.