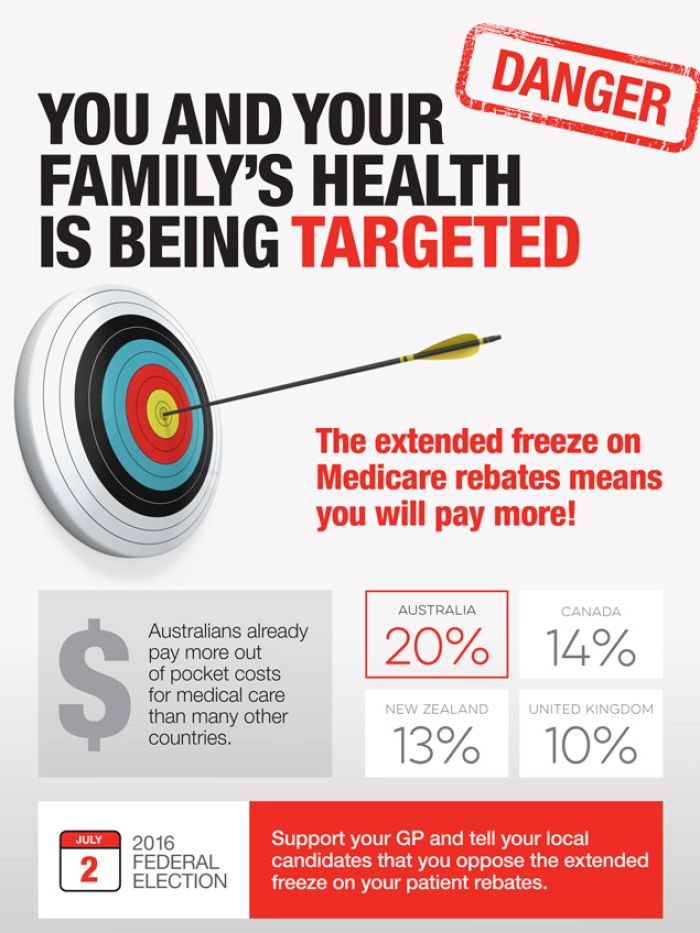 GPs say they are absorbing the cost

The Royal Australian College of General Practitioners has used the first day of the election campaign to ask its 30,000 member GPs to put up posters in waiting rooms and speak to patients about the Government's freeze on Medicare rebates.

During the campaign people will be asked to use the social media hashtag #youvebeentargeted and write letters to local candidates.

When the Abbott government scrapped the Medicare co-payment in 2014 it instead enacted a four-year freeze on the indexation of the Medicare rebate paid to general practitioners.

It means the amount paid to doctors from Medicare has not been increasing with inflation each year.

The Turnbull Government announced in the 2016 budget the indexation freeze would be extended until at least 2020.

It said the measure would save $925 million, and overall health spending had increased 4 per cent.

However GPs said their practices had been largely absorbing the cost of the indexation freeze, and if the freeze continued services would be affected.

Changes would include charging a larger gap to fee-paying patients, choosing to bulk bill fewer patients or asking patients to return for further appointments for follow- ups, they warned.

Royal Australian College of GPs vice-president Morton Rawlin said doctors expected their campaign to have an impact in marginal seats.

"I suspect it's going to be an issue across the board," he said.

"I think in many marginal seats where there are people doing it tough. This is just another impost that potentially will go on to them unless there is change in the position of the Government."

He said the freeze was a false economy because it was cheaper to see a GP than end up in hospital.

"We are the most efficient component in the health system in Australia yet we are being expected to take a cut when all the other areas are not," Dr Rawlin said.

He described it as a "co-payment by stealth", with the value of rebates falling in real terms by 20 per cent to 2020.

"The costs will be put back to the consumer, our patients, which we don't want to do," Dr Rawlin said.

"Doctors can't continue to take that on board forever."

Despite the freeze on the rebate, bulk billing rates have continued to grow and are at a high of 84 per cent.

Labor has said it is concerned by the ongoing freeze of the Medicare rebate, and says it will announce its policy on primary care later in the campaign.

The campaign comes on the back of similar lobbying by pathologists, who objected to the Government's decision to scrap a bulk-billing incentive payment introduced by Labor.