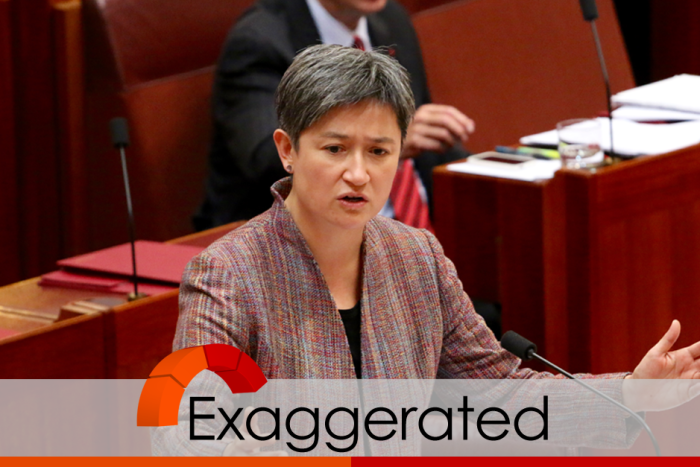 Federal Election 2016: Fact check: Did the Government triple the deficit and is debt $100b higher?

Opposition Senate Leader Penny Wong says the Coalition went to the last election "beating their chest" about debt and deficit.

"Well, since that time they've tripled the deficit, tripled it in two years, debt is far higher, about $100 billion higher, than it was when we left office and continuing to rise," she said in an interview on Sky News on May 10.

Has the Government tripled the deficit and is debt $100 billion higher than when Labor was in office? ABC Fact Check takes a look.

On debt, Senator Wong is correct to state that net debt has increased by $100 billion since Labor left office.

But the deficit over that time has doubled, not tripled.

More importantly, experts take issue with whether Senator Wong is entitled to say "they" increased the deficit and hence the debt.

The increases are affected by issues outside the Government's control, such as falling global commodity prices and slow growth in wages and company profits, and the deficit would be smaller if Labor had supported Government measures in the Senate, the experts say.

It shows the deficit forecast tripled over that two year period.

Her claim about the $100 billion increase in debt was based on comparing the net debt forecast for 2016-17 in the Pre-election Economic and Fiscal Outlook (PEFO) released in August 2013, just before Labor left office, with the Coalition's latest budget.

Senator Wong has taken a specific financial year, 2016-17, and looked at how official forecasts of deficit and debt for that year have changed over time.

Another way to look at the Government's record is to take the actual deficit and debt just before the Government took office and compare them with the most recent numbers.

Two experts, economist Saul Eslake, a vice-chancellor's fellow at the University of Tasmania, and Joanne Masters, senior economist at ANZ, told Fact Check that tracking a single year forecast over time, or comparing the actual debt and deficit at different points in time, were acceptable methods.

Fact Check has used both methods to assess the claim.

A government running a budget that is in deficit has revenues less than its expenses and investments in non-financial assets.

Whether the budget is in surplus or deficit over the course of a financial year is reported in the budget papers as the underlying cash balance, and shows whether the Government has to borrow from financial markets to cover its activities.

Senator Wong's claim is based on taking deficit forecasts for the 2016-17 financial year and comparing how those forecasts have changed over the years the Coalition has been in office.

Instead of beginning with the Coalition's first budget, Senator Wong could have chosen an official projection produced closer to the time the Coalition took office.

The table below shows how official forecasts for the 2016-17 deficit have changed.

If Senator Wong had gone back to the August 2013 PEFO, a document prepared by the heads of Treasury and the Department of Finance during the election campaign, she would have been denied an easy talking point because at that time the projection for 2016-17 was a small surplus, not a deficit.

While the difference is larger in dollar terms than her chosen starting point (a deterioration of $41.3 billion versus a deterioration of $26.5 billion), this result does not translate into simple language of a doubling or tripling of the deficit.

It is interesting to note that when it comes to the debt figure, Senator Wong did use the PEFO as her starting point.

Has the Government doubled the budget deficit?

If Senator Wong had chosen to begin with the first economic statement produced by then treasurer Joe Hockey, the Mid-Year Economic and Fiscal Outlook released three months after the election, the result would have been a doubling, not a tripling.

Using the May 2014 budget gave a lower base for Senator Wong's calculation than MYEFO, because at budget time the Government was planning to legislate large savings by 2016-17.

Those plans did not come to fruition, in part because Labor did not support the savings measures in the Senate.

Fact Check considers the fairest starting point for an assessment of what happened during the Coalition's term in office is the PEFO, the closest in time to the election, or the MYEFO, the Coalition's first official forecast.

By the time MYEFO was released, as has been previously explored in this fact check, the Coalition had taken policy decisions, both on spending and revenue, that had a $13.7 billion negative impact on the underlying cash balance over the four years of the forward estimates.

However, MYEFO said that these decisions included "unresolved issues inherited from the former government", and so contained changes that the Coalition said should have been made by Labor.

Change in the actual deficit

An alternative approach in assessing the change in the deficit during the Coalition's term is to look at how the actual figures have changed over time.

The table below shows how the actual deficit has changed, and how the estimate for 2015-16 relates to different starting years.

It also shows that the deficit has decreased, not increased, since 2013-14.

Senator Wong claimed that debt was $100 billion higher than when Labor left office and it was continuing to rise.

Government debt is a measure of its borrowing and Mr Eslake explained to Fact Check that it accumulates as a result of running deficits and its value increases over time unless it is paid off.

Senator Wong used a figure for net debt, a commonly quoted measure of a government's financial position that takes account of some of the assets held by the government.

It is equal to interest-bearing liabilities less a pool of liquid financial assets.

Unlike her claim about the deficit, Senator Wong's starting point was the forecast for 2016-17 contained in the August 2013 Pre-election Economic and Fiscal Outlook.

Fact Check has also calculated the actual change in net debt since the last election using Commonwealth monthly finance statements published by the Department of Finance.

They show that net debt was $161.3 billion in August 2013, just before the election was called, and $288.7 billion in March this year, the latest available. This represents a higher increase of $127.4 billion.

Did 'they' increase the deficit?

Senator Wong claims that the changes in the deficit were caused by the Coalition, but all of the experts Fact Check spoke to said that economic factors such as falls in the price of commodities and falling wage growth played a greater role.

Mr Eslake told Fact Check it was not valid to blame the Government for the worsening budget deficit.

"Or at least it is invalid to say 'the Coalition did it' without recognising the much larger contribution made to the differences between the two sets of forecasts by 'parameter variations' (for which you can't validly hold the Coalition responsible) than by policy decisions (which you can)," he said.

Ms Masters told Fact Check that Senator Wong's analysis was legitimate but the main issue was how much of the deficit change was policy-related and how much was due to the economic cycle.

Labor blocking $5 billion of its own savings measures

Mathias Cormann said Labor was opposing $5 billion in savings which it initiated when it was in government.

"Lower nominal GDP growth in particular has obviously quite a substantial impact on government revenue," she said.

"And revenue as a percent of GDP is obviously lower (now) than expected at the time of the 2014 budget."

Ben Phillips, from ANU's Centre for social policy research and methods, told Fact Check the deficit increases over the last seven years were more to do with revenue write-downs than policy.

"The whole debt and deficit debate is highly politicised, not really fact-based and a lot of it is pretty difficult to untangle in reality," he said.

Peter Whiteford from the Crawford school of public policy at ANU said comparing the change in the forecast deficit during the Government's term was appropriate.

"But having said that, presumably a significant part of the widening of the deficit is that not all the things proposed in the 2014 budget have got through, and many of them were blocked by Labor," he said.

MYEFO noted in 2013, just after the Coalition came to office, that the budget position had deteriorated significantly since the election.

It said this was due to a softening in the economic outlook caused by lower nominal GDP, which is a measure of the value of Australia's goods and services before taking inflation into account.

Transitioning from growth led by resources to other sources of growth, and domestic prices and wages were all forecast to be slower than at PEFO, it said.

In the 2014-2015 budget, the fall in the global price for iron ore was cited as a major reason for a drop in expected tax receipts.

By this year's budget, downward trends in wages, resulting in lower tax collections from individuals, along with a decline in non-mining profits had worsened the budget deficit again.

Each set of budget papers contains Treasury's analysis of whether changes in the budget balance are caused by policy decisions or so-called "parameter variations" — the issues outside the Government's control.

Of this, $5.5 billion was due to policy decisions and $5.8 billion due to "parameter variations".

Of this, $6.7 billion was due to policy decisions and $11.3 billion due to "parameter variations".

Of this, $600 million was due to policy decisions and $18.3 billion due to "parameter variations".

More than half of this deterioration occurred between the May 2013 budget and the August 2013 PEFO just before the election.

The PEFO said this was largely as a result of write-downs in tax receipts "due to lower nominal GDP expectations, including lower forecasts of commodity prices, wages and unincorporated business income".