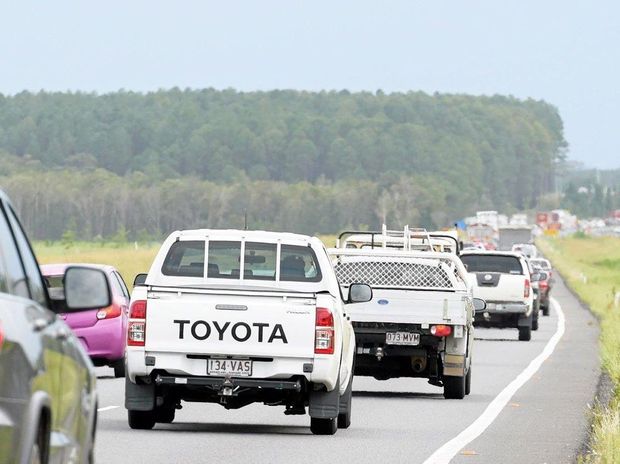 LNP state and federal MPs may well want to Boost the Bruce but six-laning of the national highway from Caboolture to the Sunshine Coast received not a cent in the Federal Budget with experts claiming a new road is at least 15 years away.

That's the hard, cold reality commuters, holiday makers and the Sunshine Coast economy faces despite Glass House MP Andrew Powell's hope that lobbying may still produce results in the lead up to the federal election via unallocated budget funds.

Even when it eventually opens after years of construction-induced traffic gridlock, MRCagney transport and traffic engineer Steven Burgess says the improved highway will change behaviour and increase traffic.

Mr Burgess said the cost would be in excess of $1 billion and likely to be higher to lift the highway out of the mud immediately to the north of Caboolture where it floods regularly.

He argues that the money could be better applied to boost the Sunshine Coast economy in other ways.

RACQ Executive Manager Public Policy Michael Roth said six-laning of the Bruce Highway was not mentioned in the 10-year road program for Queensland and no detailed costing had been undertaken.

"It is not in a program anywhere,'' Mr Roth said.

He said it was unlikely the six-laning would be considered before the massively expensive Cooroy to Curra stretch was completed as well as the $1.2bn Caloundra Road Interchange and six-laning to a new Sunshine Motorway interchange.

Funding of $50m has only been announced this week for design work for Section D of the Cooroy to Curra Bruce Highway stretch - the Gympie bypass.

That planning will not be complete before the end of next year.

Mr Roth said the RACQ wanted the Steve Irwin Way upgraded to four-lanes ahead of the Bruce Highway to six lanes to manage increasing local hinterland traffic and to provide an alternative to the Bruce in the case of accidents.

He said the Bruce Highway six-laning could then be extended north from Caboolture in stages, the first of which could reach to the southern end of the Steve Irwin Way.

Mr Roth said all overpasses on the Bruce Highway south of Caloundra had already been upgraded to accommodate six lanes.

Mr Roth said interim population growth would be a factor and there was the possibility of autonomous vehicles within a decade actually increasing traffic because driving would become more convenient.

"There is no real prospect in the next 10 years,'' he said. "And there is no infrastructure planning beyond that."

Mr Burgess said the project would take more than a year and possibly two to plan and design.

Construction, which would be done in stages over two to three years would require existing lane closures reducing traffic to speeds of 60 kph.

"There's not enough thought to how the economy would react,'' he said.

"Once complete the road would induce demand at a greater rate.

"It would take two years to start and another three years to complete and within another five years you would be back to where you started.

"If $1 billion was invested in small business on the Coast would the outcome be better?

"For all the money is it (six-laning) the best thing for the local economy.''

Mr Powell said state and federal LNP politicians had lobbied hard for the upgrade which along with the rail duplication remained his priorities.

"We will see what comes with the election,'' he said.